A report from the 66th Locarno Film Festival 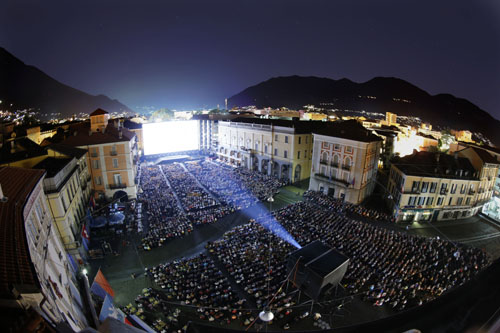 Tornado warnings added a certain frisson to proceedings on the opening night of the 66th Locarno Film Festival, held in the Swiss lakeside city’s sumptuous Piazza Grande. Lightning punctuated the speeches and gave way to rough winds during the open-air screening of Baltasar Kormákur’s 2 Guns (2013), but it was the rain that eventually had us all running for shelter. 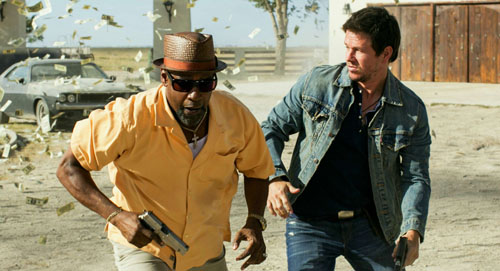 Every August, the city’s main square is fitted with a giant screen and enough black and yellow chairs – in keeping with the festival’s leopard theme – to seat an audience of 8,000. But these have mostly a decorative function since the majority of the films vying for prizes in the two main festival sections – the International Competition and the Filmmakers of the Present, dedicated to first and second films by emerging directors – are shown safely indoors. 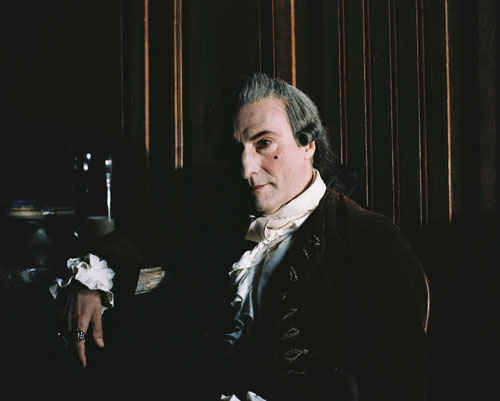 The International Competition jury, chaired by the Filipino director Lav Diaz, awarded the top prize – the Golden Leopard – to Albert Serra’s baroque costume drama Historia de la meva mort (The Story of My Death, 2013). The film is loosely based on the final exploits from Casanova’s memoir Histoire de ma vie (The Story of My Life, 1822). In Serra’s version, Casanova journeys from Switzerland to the southern Carpathians where he meets Dracula and eventually his doom. The Catalan writer-director often uses literary and biblical figures to comic effect – from the Magi in his 2008 El Cant dels ocells (Birdsong) to Don Quixote in (Quixotic) Honor de cavalleria (Honour of the Knights, 2006) – in his idiosyncratic filmic adaptations, most of which were recently shown in a retrospective at the Centre Pompidou. The comedy of Historia de la meva mort is of the dark variety, more unsettling than genuinely funny and of a piece with the candle-lit and generally murky shots that suggest more than they reveal keeping one guessing at the nature of the sexual proclivities and mores they depict.

Serra, whose production methods are anything but orthodox, makes his aversion to working with trained actors well known; he prefers to film with what he calls ‘innocent actors’, including people from his home town, Banyoles in Catalonia, but also Canadian film critic and Locarno programmer Mark Peranson, or Barcelona-based poet and art curator Vincenç Altaió, who portrays an aged Casanova with brio. 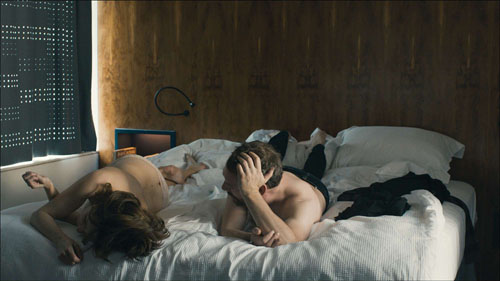 Joanna Hogg’s well-received third feature Exhibition (2013), which was among the 20 films that premiered in the International Competition at Locarno, likewise casts two first-time actors in lead roles: singer and songwriter Viv Albertine, formerly of the girl punk band The Slits, as the neurotic and sexually repressed performance artist D, and Liam Gillick as her husband H, a successful architect and designer.

The plot hinges on the middle-aged, childless couple’s decision to sell a house that has been their home for over 20 years. Not just any house. Exhibition is set in a house that the late modernist architect James Melvin, to whom the film is dedicated, designed for himself in South Kensington. Too stylish to suit the needs of an ordinary family, the minimally furnished house with its clean lines, reflective windows and, at its heart, a spiral staircase that looks superb on film, is a gilded cage of sorts. The sense of entrapment is conveyed through a wealth of details, from close-ups of Venetian blinds to the striped tops that D, who hardly ever leaves the house and appears to meld with it, consistently wears. 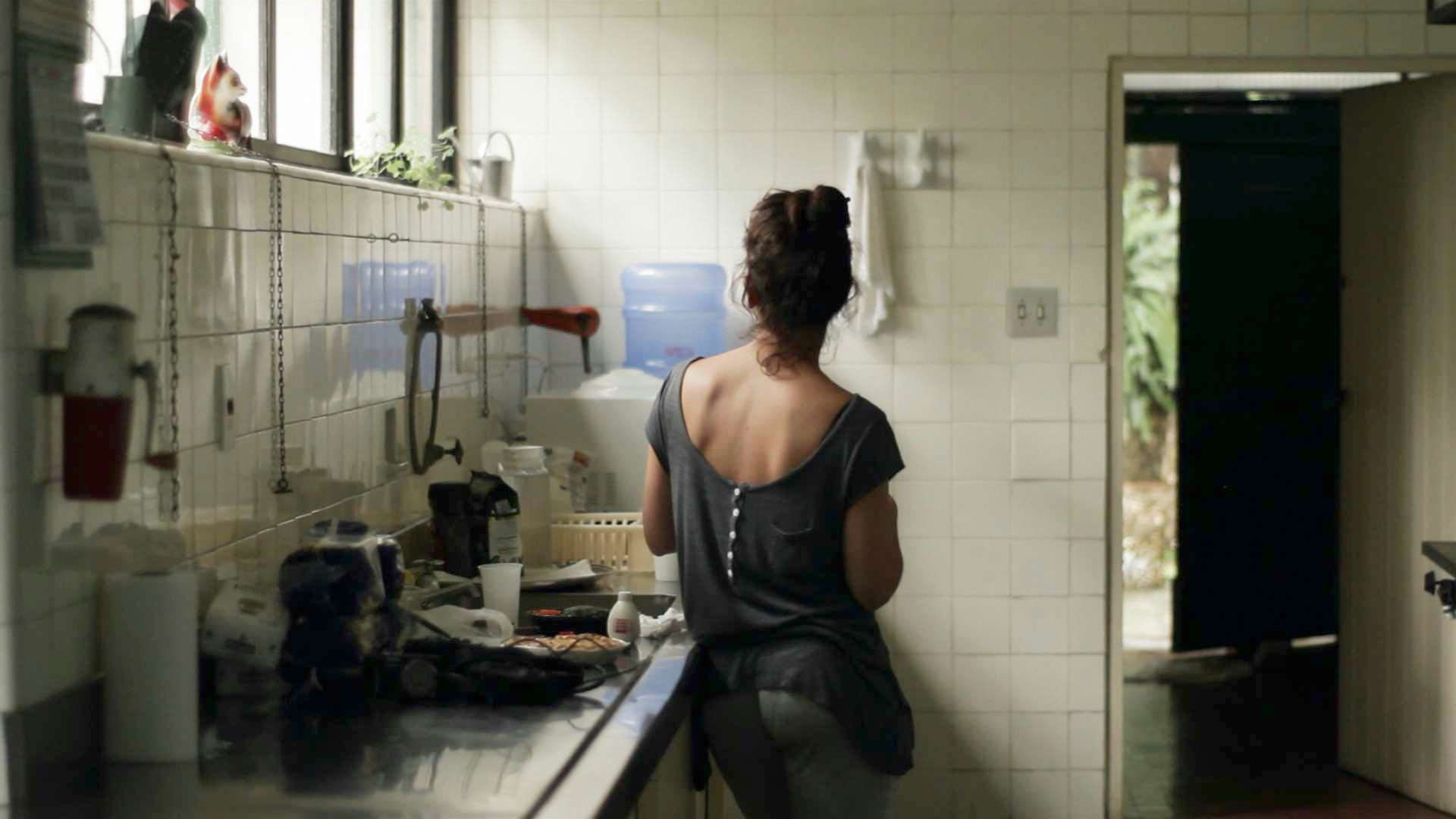 Another modernist architect’s home, Lina Bo Bardi’s jungle-clad 1951 Casa de Vidro (Glass House) in Morumbi, São Paulo, features prominently in Adrián Villar Rojas’s short Lo que el fuego me trajo (What Fire Brought to Me, 2013). Commissioned by Hans Ulrich Obrist for an exhibition he curated in April 2013 (The Insides Are on the Outside, Casa de Vidro), this is the Argentine artist’s first foray into filmmaking. The most remarkable thing about this 43-minute-long silent film is the protracted closing credits that last a disproportionate 10 minutes. Consisting of spaced out letters, black on white that form elaborate designs on the screen, they wrap up the visual experience of the film in a witty and, to my knowledge, unprecedented way.

If modernist (glass) houses are justifiably favoured by filmmakers, few have hitherto explored the cinematic potential of cable cars. Manakamana (2013) is filmed entirely inside a cable car, carrying groups of two to three pilgrims (including some goats, on one occasion) to the eponymous Hindi temple. The film consists of eleven roughly 10-minute-long shots – the duration of a ride to or from the temple, corresponding to one reel of 16mm film. Each pair or group appears against a moving backdrop of densely wooded mountains and sky, neatly framed by the window of the cable car, which recalls a cinema screen. As an essay in portraiture, Manakamana brings to mind Andy Warhol’s Screen Tests (1964–66), whereas the luxuriant landscape filmed in successive long takes, coupled with the exquisite sound design, are akin to some of James Benning’s experimental films, from Ten Skies and Thirteen Lakes (both 2004) to Stemple Pass (2012). 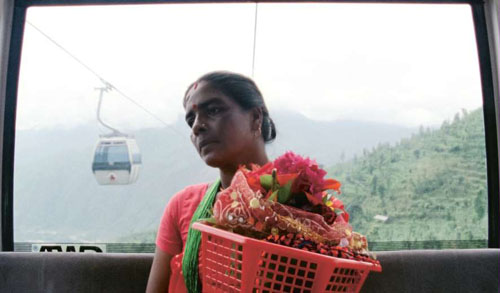 Manakamana deservedly took the top prize in the Filmmakers of the Present section as well as receiving a special mention for a best first feature. Directed by Stephanie Spray and Pacho Velez from the Harvard-based Sensory Ethnography Lab, run by Lucien Castaing-Taylor who produced the film with Verena Paravel (the two made together the award-winning Leviathan), Manakamana is the latest film from the Lab to garner prizes at film festivals. The experimental approach to ethnographic cinema fostered at the Lab, which sees sense experience as one of its most important subjects, is also at work in A Spell to Ward Off the Darkness (2013) by Ben Rivers and Ben Russell, whose films straddle the divide between documentary and fiction, portraiture and landscape filmmaking.

A first-time collaboration between the two artist-filmmakers, A Spell to Ward Off the Darkness premiered at Locarno in the new ‘Signs of Life’ side programme, named after a 1968 film by Werner Herzog who was in attendance at the festival. The film is a triptych, its three discrete parts – shot on an Estonian island (COMMUNE), in northern Finland (SOLITUDE) and at a nightclub in Oslo (BLACK METAL) – connected by certain recurring motifs (face painting, fire, triangles) and a single character, portrayed by the Brooklyn-based musician Robert AA Lowe, who appears in all three sections. Of the three, the commune section comes across as the most didactic, perhaps because it is the only one that features dialogue. Prompted by the filmmakers, conversations between the different commune members about what it means to live together inevitably feel contrived. 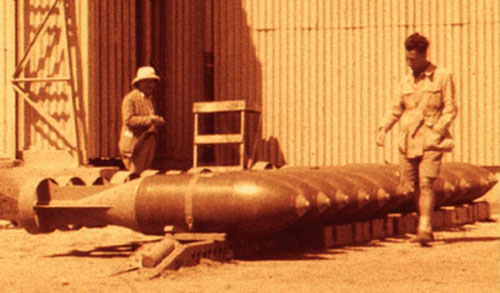 The latest film by the Milan-based duo Yervant Gianikian and Angela Ricci Lucchi, who have been collaborating since 1986, Pays barbare (Barbaric Land, 2013) is also driven by a strong political message, neatly summed up by the statement: ‘every period has its own fascism’. For the first 10 minutes of the film, blue-tinged footage documenting Mussolini’s downfall in 1945, marking the end of the Italo-Ethiopian war, is projected at decelerated speed and in complete silence to gripping effect. Culled from film archives, the hand-tinted moving images that follow in the remaining 55 minutes are powerful enough on their own, as an indictment of colonialism, without any of the literary quotes and statements occasionally read out in voice-over. That this kind of film should have its premiere in the main competition at Locarno, rather than being relegated to one of the sidebars, speaks loud and clear of the festival programmers’ willingness to take risks and their ongoing support for experimental filmmaking.