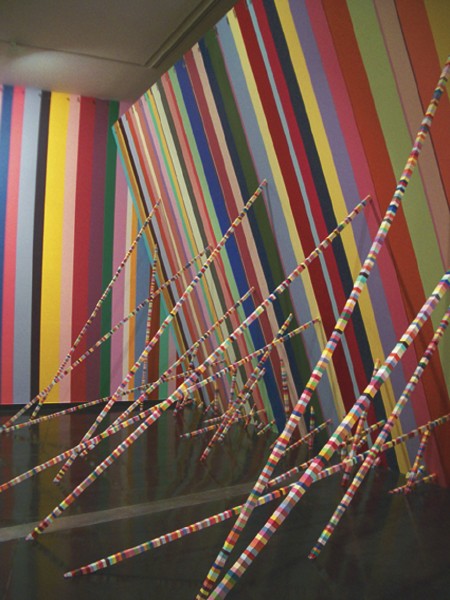 Described by exhibition curator Rachel Kent as a ‘dialogue’ between two artists, ‘Louisa Bufardeci and Zon Ito’, the fourth show in a series of international pairings at the Museum of Contemporary Art, actually comprised two distinct exhibitions displayed adjacently. The premise for each pairing is to enable an Australian artist to exhibit alongside an admired international peer in order to ‘position Australian contemporary art in a wider, global context’. This edition of the series was worthy despite the fact that Melbourne-born Bufardeci lives and works in the USA and has already exhibited regularly abroad; the show was a delight and both Bufardeci’s and Ito’s enthusiastic use of colour provided some visual synthesis.

The focal point of Bufardeci’s contribution was a site-specific installation titled Team Joy (2004), a colourful, striped corridor with striped poles of mixed length leaning precariously at various angles against the wall – like an obstacle course painted in a kaleidoscope palette. Statistical analysis features heavily in Bufardeci’s practice: each stripe on the wall represented a country and each pole an organization such as the World Health Organization or UNESCO. Using information sourced from the CIA’s website, among other resources, a country’s membership was detailed by a corresponding stripe on a pole. In Bufardeci’s words: ‘I wanted to pose the question of whether or not by having international organizations there was some desire for a universal system and hence Utopia.’ While time-consuming to decipher, the translation of the statistical data into a three-dimensional work of art does provided some insight into geo-political structures. It is surprising to note that one of the largest poles, indicating the greatest number of member countries, was labelled UPU: the Universal Postal Union. Perhaps a slice of Utopia is simply having your post delivered on time.

What Bufardeci’s model does not allow for, however, is the constant reformation and flux of the geo-political environment: the poles were rigid, wooden and not necessarily conducive to the type of back-room manipulation that occurs when confirming membership of organizations such as the United Nations Security Council. Poles made of liquorice or Lego blocks might be more appropriate.

In the adjacent space, Japanese artist Zon Ito’s curious, hallucinogenic embroideries were equally surprising and appealing. Ito privileges media that were somewhat peripheral to much 20th-century artistic practice (when embroidery and clay modelling had the stigma of being too crafty), which he employs to create hybrid landscapes and fantastical dream scenes. In the embroidered canvas Picnic (2000), for example, one can discern the methods of nihonga painting (the traditional Japanese style that renders landscape and forms out of subtle shadows), but Ito upsets the balance by destroying perspective. His work is staunchly non-narrative. The scene entails embroidered grass growing vertically up the side of the canvas, a tree trunk hovering above the ground and a floating mountain range. The loose constellation of coloured, embroidered wisps defies pictorial or narrative interpretation.

The same can also be said of Ito’s animated video work, which was the highlight of the show. Slotted back into a small alcove, Big Footage (2006) introduced a playful overtone to the exhibition, as a projected animation behind a two-way mirror jumps and skips through scenes like free-form scribbles. A monkey’s head – the Buddhist and Shinto totem for warding off evil – morphs into a smiling, wrinkled Buddha before two pixelated wrestlers appear and tackle each other repeatedly. The unpredictability of this video was furthered in Children of Veins (2004), a project that Ito collaborated on with his wife (and fellow artist) Ryoko Aoki. Split across two screens, the animation references Japan’s kawaii (cute) culture circa 1980, before the slick 3D manga world appeared, scrolling through a motley, disjointed selection of drawings. There is no narrative; rather, the animation is like a daydream – that moment when one lets the mind wander and clusters of lightning bolts can seamlessly morph into a flying bird or a pair of giant pink lips. Ito’s aesthetic might be out of step with recent cultural trends but his rejection of mainstream pop-culture imagery is, as curator Philippe Vergne has suggested, an ‘aesthetic of quiet subversion that visually echoes the anti-economic globalization that inspired Naomi Klein’s “no logo” philosophy, and a rear-garde attitude rather than an avant-garde one.’