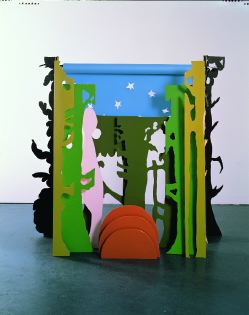 When you breathe life into something, the shape it assumes is often unexpected.

Perhaps it didn't want you to interfere and is resistant to your makeover. Perhaps it was fine about sleeping or dying or disappearing. Perhaps the life it was leading, however seemingly inert, was OK as far as it was concerned. The past, for example, has probably come to terms with the fact that it lived once, and it doesn't need you to keep nagging it to survive. Resurrect it and it's just not - thank God - ever the same. History is like a great slumbering animal which growls differently every time someone examines it. Which is, of course, what artists tend to do. Their source material is never really things that are new, but rather the existing models, the stuff lying around - some of which has been doing so for so long it seems half-buried.

This is what I think of when I look at the objects Rachel Feinstein creates. I assume that she's never let a sleeping dog lie, can't resist an old song or an old church, allow the dust to settle on a Rococo teacup, or go past a charity shop without looking at the second-hand dresses. And I bet when she was a kid, she was a tickler, one of those girls who just couldn't let a day go by without letting loose with her fingertips. I could be wrong, but her work echoes with the sounds of someone yelling 'Get out of bed!' It's an endearing quality and not a little intriguing. Feinstein makes a lot of things, many of which are kind of sculptural, and some of which fit into the loose category that has become painting. Most of them have funny, enigmatic titles such as Peaquod in Denim and Diamonds (1999) or The Pink Trembler (View 2) (2000). They often refer to songs (Yesterday, 2000) or plays (Death of a Salesman, 1999) or recall lifestyles varnished with the patina of old magazines (Hawaiian Wedding, 1999 or First Class Cars, 2000). Their look is all over the place: Rococo flourishes co-exist happily with Pop approximations of stage-sets and a kind of (for want of a better term) organic abstraction. She fuses myriad materials, as if she's plundered the contents of both her bedroom and a hardware store: wood, plaster, beads, denim, mirrors, velvet, rope, paint, rhinestones, to name but a few. Hard one minute and sensual the next, seen together these strange meshings evoke a wonderful, unsettling tension - one that changes its mind at every turn, as it embraces inherent contradictions between textures and atmospheres.

Despite its three-dimensionality, the rather solemn idea that Modernism planted in our collective unconscious about what sculpture should be doesn't immediately spring to mind when I look at Feinstein's work (a word which, in her case, has fully embraced the concept of 'play'). She seems to enjoy the challenge, however, juggling formal concerns with a jesting, curious, free-fall through art history and popular culture. Without in any way being literal, her work evokes many memories and moods that I like: jigsaw puzzles, marionettes, shooting galleries at regional carnivals, tripping high on museums with great Baroque collections, exploring florid corners in gloomy buildings, getting drunk in seedy bars beneath disintegrating disco balls, watching cartoons when you're overtired, craving something sweet when you're down. In other words, of course her work is sculptural but in the way a one-act play, or a Baroque church, or a giant cone on a 1950s ice-cream parlour is sculptural - full of information about where it's from and what it's selling, but also embracing a weird X factor that honours as it confirms the innate weirdness of all signs (read 'art'). Expect the world to proceed logically, it seems to be saying, and you're doomed to disappointment. Which, to my mind, is both reassuring and realistic.

Feinstein's work, which is serious in the sense that all good comedy is serious, is unsettling in the way its very cheerfulness challenges you, even taunts you, to take it seriously. If nothing else, the ways in which it explores complex forms and innumerable visual languages would be deserving enough of attention. But at the very point at which you begin to notice how soberly she has struggled with the dynamics of form that lurk beneath these seemingly light-hearted surfaces, she makes you laugh. Which is a clever strategy. Her imagination penetrates all manner of things and jiggles them about, waking them from their dark dreams, giggling. Take, for example, The Walrus is Paul (2000), a wonderfully silly sculpture - an arrangement of painted, shaped wood panels - with a sincerely funny title ( I refuse to even try to pull it apart. It would ruin the joke). The vaguest approximation of the idea of a walrus (which makes me think of Dürer's famous approximation of a rhinoceros) sits behind a child-like flowering bush and fence. It might be wearing a hat (although it could just have an odd-shaped head), seems a little bashful and appears, with its large eyes and beseeching expression, to be begging you to resist the very things you might assume its preoccupations to be: a song, a hallucination, Pop culture? Perhaps it's undergoing the kind of hyper-revelation about reality that Alice experienced in Wonderland or Lucy had in the sky with diamonds. That the work resists stating its purpose in the same breath that it declares its status as a one-liner is precisely what makes it compelling. It's like meeting someone who seems sweet and straightforward but who then proceeds to tell you a story that completely floors you.

The Walrus is Paul is a nice companion piece to another sculpture with a Beatles-inspired bent: Yesterday, another fusion of painted plywood cut-outs. A dancing couple look as though they've been lifted from a Fragonard or a Watteau, flattened out, coloured in by a child and then turned into a cartoon without a punchline. This jubilant pair are frozen into a permanent twirl in front of a tower built from a combination of the sort of painted waves you get on surf gear, a vase of flowers, a jolly yellow cat and a purple and black column. It's as if time has been turned into something concrete, tossed into the air and rearranged from the shattered pieces after it fell to earth. 'Yesterday' is allowed to be the slippery word it has always been but is rarely acknowledged to be - does it refer to 24 hours ago, a song written 35 years ago or a painting made three and a half centuries ago? All of the above and none of them. Time is a filter that distorts as it reveals.

I doubt that Feinstein cares about anyone reading her sculptures right. I imagine she is more interested in the movement that occurs in your head when you process the seemingly infinite information that bombards you every day. Looking is an unstable activity, and images are unstable objects. Great Rococo paintings and great cartoons are open and sincere about their artificiality: it's this sort of paradox that Feinstein seems to take particular delight in. Every day our 'real' world collides with our 'imaginary' one. It could be something you've seen or overheard, some trivial thing that, by the nature of its very displacement or emphasis, reiterates the potential vigour that lies dormant in the world we move through. This surely is a cause for celebration. Feinstein is making the invitations.