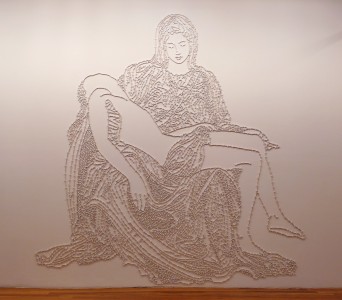 ‘Fuck Architects: Chapter I’, Moroccan artist Mounir Fatmi’s first solo show at Lombard Fried, deliberately blasphemed its own premise. That the show was precisely about constructing – or more specifically, about establishing connections between things – was evident upon entry. The visitor first confronted a cascade of white coaxial cable that spilt from an opening in the office wall and over the entrance hall floor like a waterfall. It was only a short step from here to the next stop, an intersecting sculpture made of brightly coloured horse-jump poles that was as linear and disjointed as the cable was fluidly propulsive. Entitled Obstacles (19 Poles) (2007), this sculpture in turn guarded entry to the main gallery, where, forced to step around and through the poles, the viewer became aware of the exhibition’s tour de force, an image of the divine architect as envisioned by none other than Renaissance master Michelangelo. Fatmi’s Bas-relief (Pietà) (2007) transformed Michelangelo’s sculpture into a painstakingly crafted wall relief made out of the now familiar coaxial cable. Lest things appear too familiar, however, this iconic image was confronted, on the opposite wall, by Fatmi’s personal statement against authority: ‘My father has lost all his teeth,’ the painted letters read. ‘I can bite him now.’

Moving through Fatmi’s exhibition was a bit like navigating an obstacle course. Invited forward, one was immediately thrust back. Gaining confidence in the show’s direction, one encountered contradiction. Fatmi has said that his work concerns the importance of building at a time when society is faced with constant images and acts of destruction – when to build is fraught with the likelihood of its own undoing. Being an artist, Fatmi focuses on material or imagistic acts of creation – hence the art-historical references in his recurring debts to Michelangelo, Jackson Pollock and others. But the larger point would seem to be the importance of taking a stand such as was necessitated by the unwieldy wooden poles, which compelled the viewer to step back and actively confront his or her position vis-à-vis the works of art and the space they inhabited. Born in Morocco but currently living between Paris and Tangier, Fatmi incarnates that split identity which is increasingly the norm, and his work likewise embraces this in-between condition. If our master narratives ­– Religion, Family, History ­– are now suspect, Fatmi’s work endeavours to create within this state of uncertainty, to show that building is still possible even as our edifices must question their own foundations.

It is not incidental that Fatmi frequently employs outmoded materials typically used to disseminate information: the coaxial cable, for example, now largely replaced by digital technology, or standard VHS tapes, which in the Lombard-Fried exhibition were placed against the wall to form an anonymous urban skyline. Precariously stacked, their black tape pulled out in streams, these voided relics evoked globalization’s eradication of cultural and national specificity, even as they acquired new relevance in Fatmi’s hands. This duality also characterized the adjacent Bas-relief (Pietà), which Fatmi made by projecting a drawing of Michelangelo’s Pietà (1498–9) on the gallery wall and painstakingly tracing it with hundreds of pieces of cable. The result is a vast network of broken lines within which Christ’s body is a silhouette in negative space, largely formed from the folds of his mother’s cloak. Here, loss and emptiness encountered an earnest commitment to this now absent place. Not all of the works in the exhibition were as strong. A sculpture of a tightly wound spool of cable placed atop a pedestal did not quite hold its own as a singular object. But in an exhibition about the relationships between things it found a place. It was at once a marker of the viewer’s path through the show, a technological remnant and a carefully preserved resource for potential future use.

Temporality is encoded in and across Fatmi’s work, most blatantly in the video Man without a Horse Chapter 3 (2005). Here, in slow motion and against measured orchestral strains, a man dressed in traditional English riding gear kicks an anonymous history book along a muddy country path. As in the artist's Pietà, dependency – a need to jolt the dusty tome back to life – accompanies assault. Our grand narratives may have fallen, but, Fatmi’s associational approach suggests, the need to make sense of things remains.