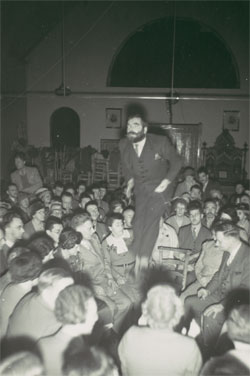 In 1924 the writer Thomas Mann attempted to explain the popularity of spiritualism, or what he termed ‘the materialization phenomena’ in post-World War I society: ‘People have had to bear so many things they had not thought possible, and to undergo such dramatic events, that the indignation we are still struggling to feel […] is combined, in a not negligible proportion, with a tendency to make concessions.’

The curiously non-judgemental and solemn exhibition of spirit photography at the Metropolitan Museum of Art seemed to take Mann’s words as a mantra. Steadfastly refusing to comment on the veracity of the many photographs on display, the show asked the contemporary viewer to make as many concessions as the original audience; although judging by the laughter that echoed throughout the gallery, such dispensations are harder to come by in the 21st century. This accommodating tack by the curators was no doubt an attempt to play to a culture that is currently possessed by all things paranormal. Whether it is live television broadcasts of exorcisms, the latest B-movie starring ghostly Japanese children or the attempts to get the theory of Intelligent Design taught in American science classes, this was a show aimed at an age that really wants to believe in a hidden reality. Yet despite having this mystical Zeitgeist to back it up, ‘The Perfect Medium’ was not entirely successful.

Over 100 photographs displayed what can loosely be classed as the three different types of spirit photography: ghosts and spirits, emanations and vital forces, and photographs of phenomena at séances. Focusing mainly on the period from 1860 to 1940, these pictures show veiled silhouettes floating ominously over unsuspecting subjects, ectoplasm seeping from the mouths of mediums, and tables levitating in mid-air. They are wonderfully entertaining but hardly persuasive. Albert Von Schrenk-Notzing’s photographs of the medium Eva C. growing an ectoplasmic veil shows, in the most dramatic manner, a woman with a ragged handkerchief on her head; the self-portraits taken by the medium Mrs Wood of her own spiritual transfiguration depict an old woman with a remarkable facility for gurning, while most of the photographs taken by Edouard Burguet are delightful but unashamed double exposures. Sometimes the effects, while implausible, are revelatory. The pictures taken by Thomas Hamilton of the medium Mary M. producing ectoplasm through her nose, bearing the likeness of Arthur Conan Doyle, are reminiscent of a Peter Blake Pop collage, and many of the photographs of ‘digital effluvia’, gained by pressing fingers into wet negative plates, have a prescient abstraction to them.

The pictures are so amusing that you can almost forget that their original purpose was to add a scientific lustre to the quizzical belief of spiritualism. A perfect Victorian creation, the modern spiritualist movement attempted to replace blind faith with so-called empirical evidence, abetted by the then embryonic technology of photography. However, the photographic tricks that once convinced have not aged well. Saturated as we are by doctored images, it is nigh impossible for us to understand a time when photography was treated by the public as an objective scientific medium, just as it is almost beyond comprehension to imagine how the Lumière brothers elicited screams from their audiences on showing their film of a train pulling into a railway station. As far as visual language is concerned, we have lost our technological innocence. All that is left is our nervous disbelief at their conviction.

Because of this, the curators’ insistence that the photographs ‘stand as wonderful examples of the power of the imagination’ is not the whole story. Fittingly for an exhibition on the occult, the true wonder of the show lay in what is unseen. As the wall text was obliged to point out, many of the mediums and spiritualist photographers who created these pictures were unmasked as frauds. Yet remarkably this seems not to have affected their followers and clientele. Indeed in some cases the mediums’ acknowledgement of wrongdoing made them more popular than they had been before. It seems that if enough emotion had been invested in one photograph, no matter how fake it may have looked, many people could not bring themselves to admit it was all for nought. Self-deception begat self-deception, and a tendency to make concessions ultimately became a pathological condition. Thus the true power of the imagination that ‘The Perfect Medium’revealed is not found in the pictures themselves but rather in the unquestioning belief of their original audience.