The mysteries of buzzing boxes 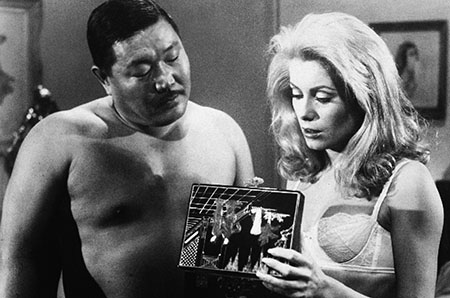 The most famous scene in Luis Buñuel’s Belle De Jour (1967) is where Severine (Catherine Deneuve) – a young bourgeoise masochist who works in a brothel to appease her fear of frigidity – meets the Oriental Gentleman. He shows her a box which emits a buzzing sound. Severine is intrigued.

After the mysterious perversion has been performed, the camera enters her chamber and we see her in a half faint on the bed. The camera pans up her body to reveal a close up of a blood-stained towel. We never discover what was in the box. Buñuel claimed not to know either, and countered questions as to its contents with ‘whatever you want there to be’. The critic Gwynne Edwards took the Freudian position that it represented the vagina, signalling a decisive step in Severine’s sexual development. This box is presumably the trope which Quentin Tarantino borrowed for the briefcase around which the script of Pulp Fiction (1994) revolves. Instead of a sound, the case emits a golden glow. In the final scene, Jules (Samuel L. Jackson) is robbed at gunpoint. He has surrendered his ‘bad motherfucker’ wallet but not the case; it is not his, and besides, the events surrounding it have led him to a point of spiritual transition – he is planning to walk the earth like ‘Caine in Kung Fu’. Again, we never learn what the case contains, but as Pumpkin (Tim Roth) says as he looks at the golden glow: