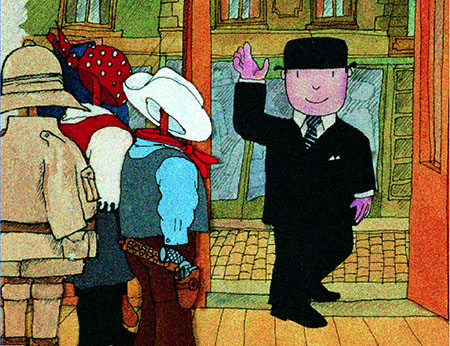 Stepping smartly along the stucco-fronted streets of what looks rather like Pimlico, Mr Ben makes his weekly visit to the fancy-dress shop. After exchanging his 70s-cut pinstripe and bowler for an astronaut’s outfit or chaps and a stetson, Mr Ben emerges from the changing room to find himself in the midst of a moon landing or as sheriff of a small frontier town just as the big gunfight is about to go down. Fortunately for Mr Ben, the shop’s mysterious be-fezzed proprietor inevitably appears when things start to look black. He is whisked back to the changing room where he can return to the comfortable familiarity of his sombre suit and hat. Back in the office, daydreaming about his weekly adventure, perhaps he will handle his biro a little more assertively, signing dockets with a manly flourish (until computerisation renders him redundant). With his ability to seamlessly integrate himself into any environment, Mr Ben is the true role model for a generation of artists tempted by the illusion of adventure another discipline might offer.