The prolific inventor in the laboratory with Mark Twain

At his death in 1943 Nikola Tesla, early pioneer of X-ray and wireless technology and inventor of the AC power transmission system, fluorescent light and the Tesla coil transformer, had over 700 patents registered in his name.

An enthusiastic showman and consummate salesman, Tesla entertained audiences by generating huge, Promethean arcs of indoor lightning and was not averse to passing thousands of volts through his body to demonstrate the safety of the electrical system he was developing. His macabre battle with Thomas Edison, in which each side publicly electrocuted animals in order to prove the dangers of the other’s electrical theories, eventually led to AC’s acceptance as a means of power transmission and, indirectly, to the invention of the electric chair.

Working on the principle of resonance, Tesla asserted that every object in the universe, animate or otherwise, vibrates. If two objects can be made to vibrate at the same frequency, then large amounts of power can be transferred between them – the opera singer’s ability to shatter glass being the best-known example. With ideas of ‘death rays’, radio-controlled warships and sonic weaponry also on his mind, Tesla’s claim in 1898 that he could split the Earth ‘as a boy would split an apple’ was not to be taken lightly, especially as that same year he had also caused a minor earthquake in Manhattan. Mark Twain, who was among the prolific inventor’s many friends, even once offered to be Tesla’s agent, selling his ‘destructive terror’ to European armies as a war deterrent. 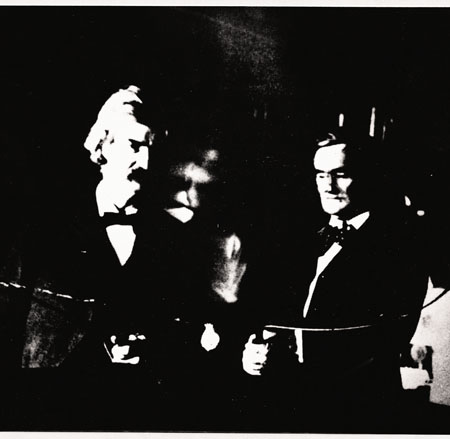