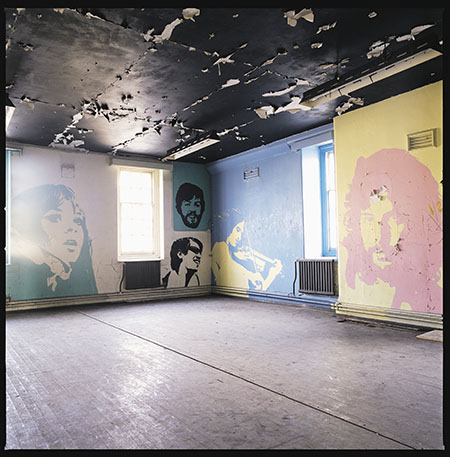 The Royal Army Medical College, London, has stood pretty much empty from 1975 until its recent acquisition by The London Institute. During the process of renovation (the building is being transformed into an art college), a first floor common room at one end of a barracks block was found to be covered with murals of early 1970s musicians. These high-contrast images (fashionable in the late 1960s and now ‘cool’ once again) have been painted in a variety of lurid complementary colours. The ceiling is black and at some point all but two of the windows had been painted over.

The room appears to have been decorated by a mildly depressed teenage speed freak, and looks like it belongs in a squat. In one corner the word ‘peace’ has been spelled out using the initial letters of ‘Pathos Emancipation Allegiance Compassion Endeavour’; a weird mix that seems both confused and touchingly naïve.

That the army should have permitted such defacement of its property is odd considering the uniformity of military life – but those were the 1970s and perhaps a decade of encroaching liberal values and the increasing importance placed on individual expression had filtered through the Defence’s defences. Even the bedrooms are painted bright pink and yellow.

The murals are to be preserved but the room, robbed of its decayed military surroundings, will lose its impact. The melancholy of passing time and the fake sense of nostalgia it evokes will disappear, to be replaced by the amused curiosity of those wearing a different kind of uniform.