The Plain of Heaven 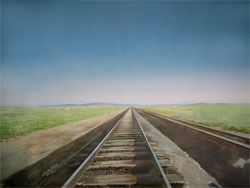 Creative Time’s exhibition, set in a derelict meatpacking warehouse, was a beautifully paradoxical paean to our ‘desire for the inaccessible’. Taking its inspiration from the High Line – a one-and-a-half mile-long disused, elevated railway track that winds its way over the quickly gentrifying art lands of west Manhattan – ‘The Plain of Heaven’ both celebrated the railway’s aloofness from the myriad concrete-floored gallery spaces below it and lamented its passing, since it too is soon to be the subject of gentrification. The result was a show suffused with yearning and imbued with a melancholy feeling of transience.

Fourteen artists had their work scattered through cold storage vaults and smoke-rooms, among meat hooks and peeling walls. From the gloomy belly of the building Paul Ramirez Jonas’ Water Thief (2005) – a huge, seeping water-clock – was calibrated to trickle out the hours of the exhibition, acting as a monstrous timepiece to all that surrounds it. Meanwhile upstairs, in a long, airy, sunlit room, the choreographer William Forsythe created a mesmerizing performance piece, Nowhere and Everywhere at the Same Time (2005), in which a dancer winds and twists for hours on end among a field of hanging pendula, like some benighted spatial wanderer trapped on a Surrealist canvas.

There was a sense of thwarted desire running through the show. Leandro
Erlich’s Las Puertas (The Doors, 2004–5) is a bank of closed doors through the keyholes of which streams bright, paradisiacal light. But open ones of these doors and walk through it, and the promised light of salvation disappears. The viewers find themselves in the same dark space they had just left. The hoped-for transformation was nothing but a trick of the eye. Meanwhile Saskia Olde Wolbers’ hypnotic and disconcerting film Kilowatt Dynasty (2000) depicts a strange subterranean world of globoid shapes and reflective surfaces. But as beautiful as the images are, the surfaces seem to leak perspective. Forms are stretched unnaturally, and, as the narration grows ever more absurd, the viewer is gripped by the horrible sensation that what is being shown is not a dream world at all but a delusion.

What made the show all the more poignant was the presence of the crumb-ling steel High Line itself running along-side the exhibition’s upper level. Derelict since 1980, the majestic structure is now carpeted with meadow grass and wild flowers. Having narrowly escaped demolition in 2002, it is soon to be turned into a skilfully designed park and public art space. Yet here is the irony: the very thing that allowed the High Line to be saved – its unplanned mixture of nature and industrial ruin, the tension between its former functionality and its present majestic impracticality (a railway, 30 feet in the air, going nowhere!) – is to be destroyed, or at least neutered.
The curator, Peter Eleey, admits in his trenchant catalogue essay that the destruction of the High Line’s accidental landscape in order to create what is in essence a fictionalized version of itself cannot help but bring to mind Umberto Eco’s dictum that ‘the American imagination demands the real thing and, to attain it, must fabricate the absolute fake’. Nevertheless this paradox lent ‘The Plain of Heaven’ a pleasingly elegiac aesthetic. Whatever is sought recedes painfully out of reach, just as the photographer O. Winston Link’s astonishing sound recording of a steam train, passing in a fury and disappearing into history, sounds out a dirge to the necessity of change. Even the uncut pages of the exhibition’s catalogue seem to promise secret worlds hidden between the folds, which can only be accessed by taking a knife to the book and destroying it for ever.

Inevitably the spirits of Gordon Matta-Clark and Robert Smithson hovered over the exhibition and the High Line itself. But whereas a project such as Matta-Clark’s Day’s End (1975), which also appears in the show, was couched in a distinctly anti-capitalist sensibility born out of an era of urban decline, the transformation of the High Line is a child of our own more commercial time.

After the exhibition closes, the meatpacking building that houses ‘The Plain of Heaven’ (itself harking back to an era when artists could actually afford such workspaces) will be torn down and replaced by the Dia Art Foundation’s future New York headquarters. Yet perhaps total destruction is the only fitting end for an exhibition devoted to transience. Indeed when the demolition begins, one work of art will be left inside: Sol Lewitt’s Wall Drawing #51 (1970), a skeletal X-ray of the architectural points of the wall that holds it. Its deliberate obliteration imparts a final, unexpected tone of romantic nobility to the show, like that of a captain going down with his ship.