If exit polls are to be believed (and the recent UK elections have sadly shown they should be) the main show of this year's 56th Venice Biennale is a flop. ‘Dreadful’, 'dire’, 'depressing’ are some of the more printable adjectives I’ve heard to describe it. ‘Venice is Bad' was the insightful email header from a supposedly serious art news source. 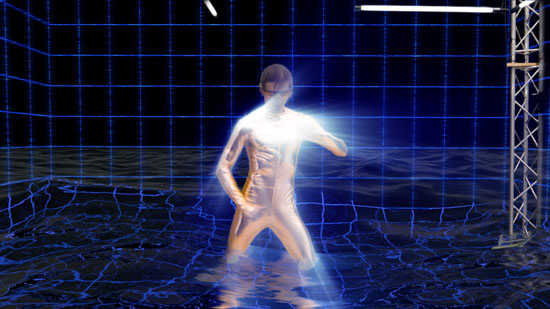 Call it the typical grumbles of footsore, spritz-lite art tourists but an easy show to digest ‘All the World’s Futures’ ain’t. The Okwui Enwezor-curated exhibition is a dense, theory-crammed, historically-ridden conceptual disquisition. If you like your exhibitions with light and shade and a generous guiding hand, you won’t find it here. Enwezor’s title ‘All the World’s Futures’ exemplifies his tendecy to invert common logic, as he sees no contradiction in taking this as free license to mine the past for his curatorial inspiration. He summons the spectre of Marx in programming the reading of all four volumes of Das Kapital – explicitly an analysis of historical and 19th century labour and market conditions that, some economists would argue (c.f. Thomas Piketty), no longer apply to today’s intrisically networked structures of global capital – and in the show’s accompanying statement, Enwezor invokes Walter Benjamin’s hallucinatory description of Paul Klee’s Angelus Novus, a painting Benjamin owned, as justification for his historical methodology as well as the lever to illuminate ‘both the current “state of things” and the “appearance of things”’. As well as the reading of Marx throughout the Biennale’s duration in the ‘Arena’, a theatre designed by David Adjaye in the heart of the Central Pavilion, work by Fabio Mauri and Bruce Nauman open the Central Pavilion and Arsenale respectively, and ‘anthologies’ of Terry Adkins, Hans Haacke, Harun Farocki, Walker Evans and Chris Marker can also be found scattered throughout this dense show featuring works, and often groupings of works, by 136 artists. 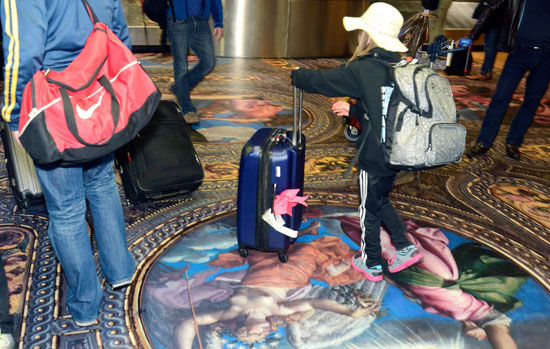 It’s a fair gambit, learning from history to shape the future, but what the historical positions in this year’s exhibition tell us about ‘a project devoted to a fresh appraisal of the relationship of art and artists to the current state of things,’ as Enwezor describes the show in his accompanying statement, is unclear. Moreover a narrative that would guide us through the admirably diverse yet fractured groupings of artists, a way of positioning their often rewarding work into a coherent structure, was lacking. Perhaps that’s the key missing ingredient here, legibility. In its desire for fulsomeness, this show has overcompensated. (For a far more detailed and thoughtful analysis of Enwezor’s show read Amy Sherlock’s blog here and see the forthcoming Summer issues of frieze and frieze d/e for in-depth reviews on the Biennale and pavilions.) 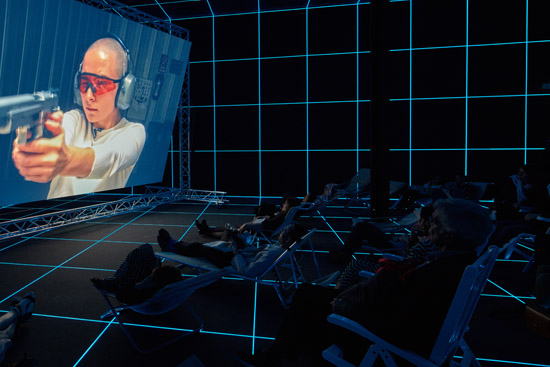 ‘We need knowledge of future-futures not past-futures’, to paraphrase Bertrand Russell. If Enwezor’s focus was on the past, two Berlin-based artists outside of his curatorial remit focused on the contemporary issues which Enwezor presumably had in mind; with a charm, wit and attention to storytelling missing from Enwezor’s overwrought exposition. 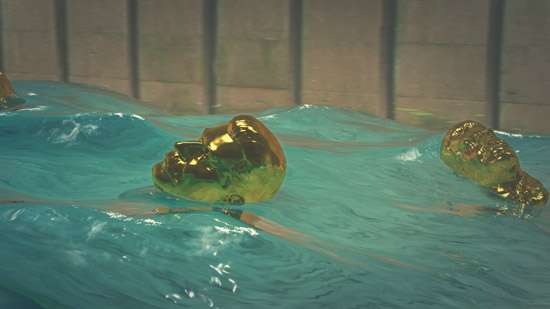 Hito Steyerl’s film Factory of the Sun (2015) was screened in the large dark ‘basement’ of the reconfigured German Pavilion – a high up mezzanine which led down to three ground-floor chambers – with grids of blue LEDs created a _Tron_-like environment where viewers could lounge in deckchairs. Steyerl’s fractious, digitally-buzzing film follows the creation of a spoof video game that discusses, amongst many other things, the shooting down of a Deutsche bank drone that has targeted an innocent bystander. We the viewers are supposedly implicated, by watching from the ‘studio’ the game was created in – the characters one can choose in the game, wearing lycra bodysuits, intermittently breakout and dance to techno. We hear the backstory of one of the female characters, her Russian grandparents sold all their possessions to buy a car and leave the country, only for the borders to change and find themselves back in the USSR; a disembodied bust of Stalin floats in soupy digital waters (a dig at Enwezor’s raising of Marx?). One scene shows our tough-looking protagonist firing a gun at a practice range. In the specification drop table that appears on screen, the gun is classed as ‘tested at Ferguson’. The visuals chop from video game footage, to its motion-capture making, to faux news channels lambasting a Deutsche Bank spokesperson for the company’s implication in the drone strike. (‘Super, so I’m supposed to be the German twat, right?’) It’s irreverent, silly stuff but also poignant and sadly pertinent. Implication in the systems of power to the point where the only form of resistance is complicity (the making of a video game) ultimately delivers a pessimistic payload that the humour can’t efface. But at least it speaks to a reality we recognize as today. 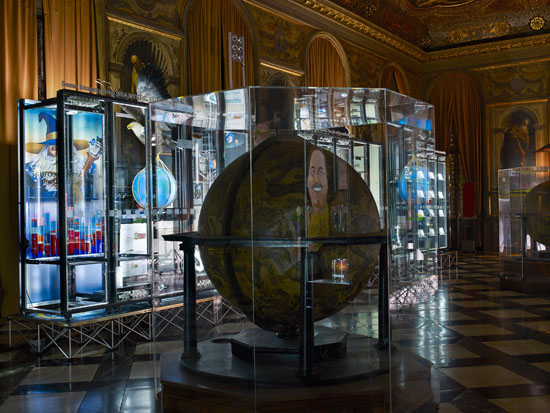 ‘Is it Gameable?’ reads text on one of Simon Denny’s data farm-like installations in his show ‘Secret Power’ for the New Zealand pavilion. Housed in the opulently beautiful Bibliotheca Nazionale Marciana, this bastion of knowledge features some of the oldest surviving maps of the globe. This quote is taken from GCHQ files leaked by Edward Snowden in 2013, and the show as a whole takes as its star the former NSA Creative Director of Defence Intelligence, David Darchicourt, and his graphic designs revealed in the Snowden leaks. Starting with a 3D modelling of Darchicourt’s LinkedIn profile and ending with a Terminator 8000 skull, each terminus mimics the simplicity and legibility of information presentation that Darchicourt prized (shown somewhat ominously are reproductions of children’s games Darchicourt also designed). But Darchicourt is not the bad guy here, more an unwitting pawn to a faceless, borderless system of organizations – the overarching target is the ‘Five Eyes’ intelligence agencies of the US, UK, Canada, Australia and New Zealand. Where Denny plays brilliantly is in that weird lacuna that arises in the fact that a secret service employs a designer to make their work more legible. 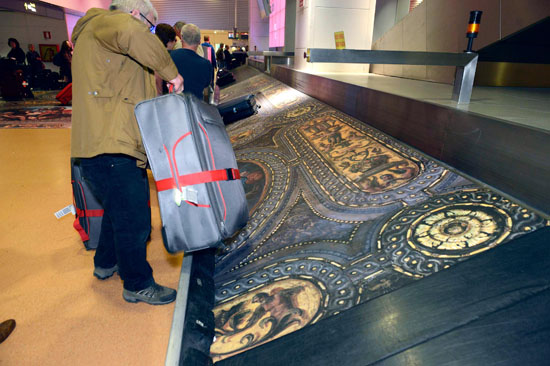 Are Steyerl and Denny’s takes too funny, too cutely ‘accurate’? Are they too implicit in the horrors they describe? ‘Give us critique not comedy!’ we might pompously demand. Now, as Snowden has shown, disruption comes from within, not from a retrograde spirit of ’68, ‘man the barricades!’ nostalgia. Fighting intelligence requires intelligence and tactics that match. Close studies of the past are important and the needed revisioning of historically-skewed narratives and forgotten positions are welcome, but any depository of knowledge relies on that information’s accessibility. Speaking to the Guardian recently about the content of the Snowden leaks and his Venice exhibition, Denny put it like this: ‘These images contain a lot of cultural information that we just haven’t been able to unpack. The attempt with this exhibition is to give people the tools to do that.’ It wasn’t just the water that was cloudy in Venice this year. 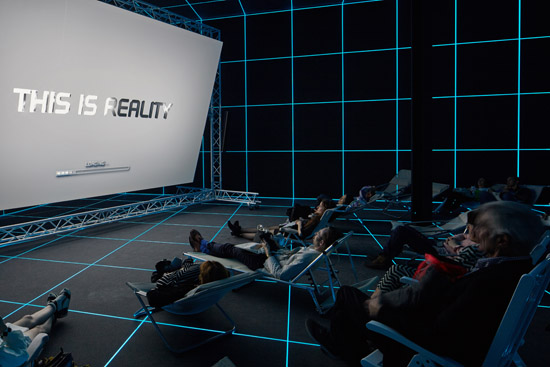