Intricate sculptural ensembles, dioramas and miniaturized models in the work of Ricky Swallow 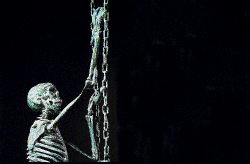 In Ricky Swallow's Vacated Campers (2000) a pair of grey gym shoes lie on the floor, as if discarded. They have the moulded contours and worn look of well-loved footwear, but they are oddly inert and drained of colour. On closer inspection, we see that they are made of cardboard, and that their suede appearance is the result of some technique that gives them a powdery post-Pompeii appearance.

Swallow's work is inextricably linked with replicas, typically of the things we love, such as simple technologies invested with escapist powers. In the case of the Campers, while we might think of Van Gogh's paintings of work boots, Swallow refers to his sculpture as an 'evaporated self-portrait'. The shoes offer weak evidence of our 'uprightness' as human beings, as opposed to chimps or apes, and are suggestive of our potential extinction. More than a homage to good design or a memento of personal traces, the cardboard replicas also engage with a recurring theme in the artist's earlier works: evolution, particularly as it is featured in sci-fi films.

Intricate sculptural ensembles, dioramas and miniaturized models are the staples of Swallow's practice. Constructed predominantly from cardboard and plastic sheeting in a labour-intensive one-man 'factory', his time-travelling objects are charged by their production values. Any number of artists are interested in scale and form, but Swallow's investigations constitute an archaeology and geology of objects as they lose their effective life. He invests his time in making commemorative monuments, or what he calls 'objects with no prospects'. Swallow chooses common items as well as cult icons and institutions as his subjects and suspends them in a state of imaginatively short-circuited historical progression.

If many of his works are nostalgic, such as the handmade PVC BMX bicycle Peugeot 'Taipan' Commemorative Model/Discontinued Line (1999), they also hover between being in and out of their historical moment. A series of works from 'Unplugged', his recent show at Darren Knight Gallery, Sydney, bears out this logic. His unusually colourful cast of the Apple Macintosh insignia, Apple 2000 (2000), for instance, arrives at a time when Apple computers have toned down their now rather 1980s-looking badge. Swallow has cast it in a sedimentary way, pouring layers of resin into a mould of an apple from which he has taken a humanizing bite. In the same suite of superseded specimens of the entertainment industry preserved in vitrines, a Rubik's Cube lies scattered like an archaeological specimen next to a barnacled Game Boy - last year's model.

The mutest object in Swallow's constructed world is one dedicated to a vision machine: a perfectly white 1:1 replica of a telescope. The Stars Don't Shine Upon Us, We're in the Way of their Light/Family Telescope (2000) is part of a series of works dedicated to objects of boyhood exploration: the BMX, various silver stereos, a metal detector and a set of headphones. As more or less obsolete technologies, Swallow appears to be testing the mortality of these objects. There is something odd about his exploration of these purely functionless but once desirable things ordinarily so full of potential to take us away from the quotidian. Blurring the boundary between authenticity and simulation, their apparent capacity for movement and their inability to achieve it, is confounding.

One work in particular exemplifies this: a recent series of small futuristic dioramas with endlessly rotating elements activated via old portable turntables (a collection of which were shown at the Melbourne International Biennial in 1999). Distinct but interrelated micro-places, the models portray sinister worlds of elaborate prison architectures and apocalyptic evolutionary futures, and feature spinning figures, sometimes under surveillance or in a state of panoptic solitude. The figures are commercial products, bought as packets of naked limbs and assembled by the artist, who then uses epoxy putty to model the clothes and haircuts. Like Gulliver in Lilliput, we are transfixed by the peculiar appeal of these miniatures. There is almost always something suspect or volatile in these works, which create the sense of a fictional space through delightfully understated and often humorous gestures. The most recent are more like frozen cinematic tableaux: in The City Sleeps (2000) the only moving parts are two cleaning brushes on a mechanical street sweeper, over which a man is slumped. Like the narratives of films such as Village of the Damned (1960), this work presents a town put to sleep - only the hum of machinery continues.

Model for a Sunken Monument (1999) is a massive sculpture of Darth Vader's head, deconstructed into planar MDF sections. It is based on 3D cardboard puzzles, and conceptually ties together a group of Pop-cultural works underscored by death and natural history. Ambiguously rising from or melting into the floor, this statue of an icon of sci-fi modernity melds with what is now an antiquated but easily identifiable villain. Evolution (in Order of Appearance) (1999), a closely related earlier work, references another Swallow favourite, Planet of the Apes (1968), charting a mock 'evolutionary history' of the human face via a grouping of miniature skulls.

If time and its uncanny dislocation are central to an understanding of Swallow's work, perhaps it is inevitable that death has surfaced as a key theme. The First One Now (2000) is a macabre premonition of human demise. Inspired by an image from Terminator 2 (1991), it comprises a cast resin life-size skeleton on a chain ladder rising up from the floor of the gallery. Though the skeleton is bone-coloured and covered in colourful squiggles embedded below the surface, like the Darth Vader sculpture, it seems to be turning to liquid. In relation to Swallow's oeuvre and the usually accessible humour of his familiar objects, The First One Now is perplexing, offering few clues as to what it is a prototype for. Apparently mapping Darwinian qualities onto a museological model of the human form, Swallow refers to it enigmatically as a 'final moment portrait'. 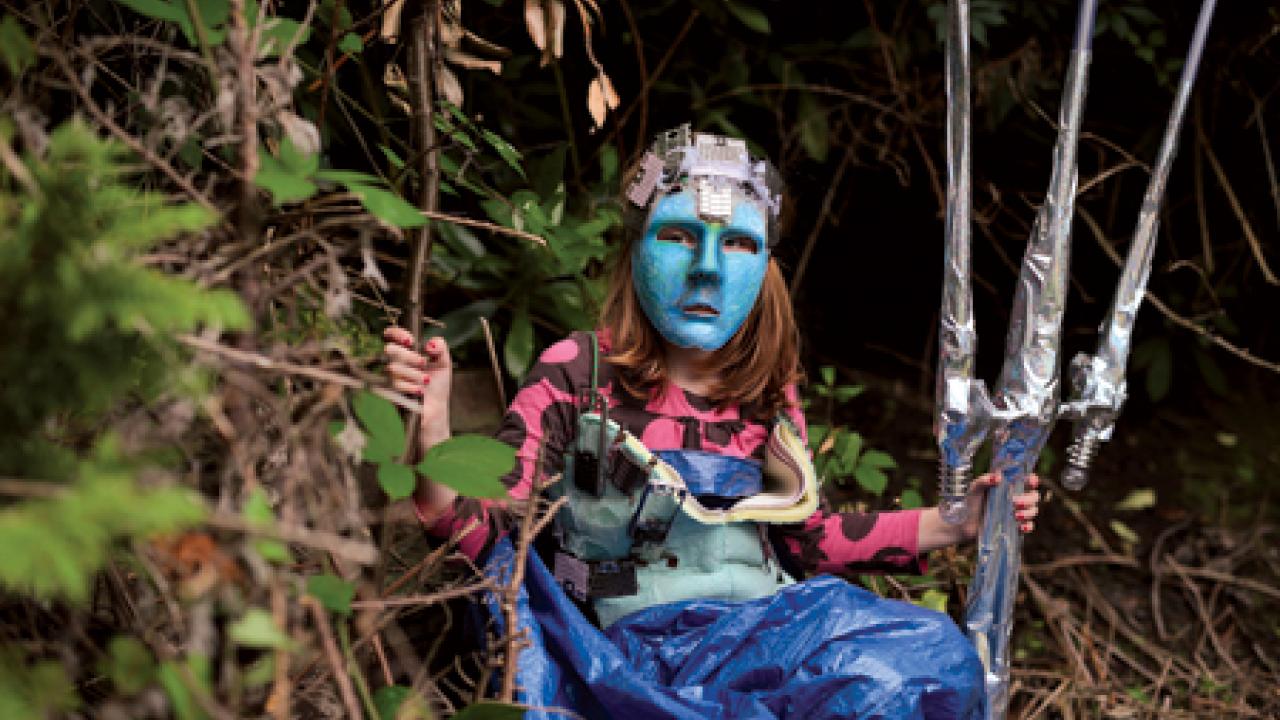