The erotics of looking and collecting 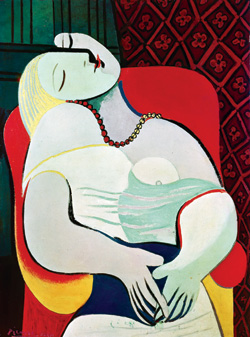 A decade ago I accompanied a group of art patrons on a tour of the collection that then graced the Bellagio Hotel and Casino in Las Vegas. Our glittering, garrulous host was the man who’d put it together: gambling tycoon and pitchman Steve Wynn. Housed in theatrically designed and illuminated galleries off the casino’s main lobby, where marathoning high rollers and slot-machine-besotted day trippers congregated under a frilly multicoloured firmament of Dale Chihuly glass, Wynn’s vest-pocket museum boasted major works by Camille Pissarro, Claude Monet, Vincent van Gogh and Willem de Kooning, among others.

Having tossed off this well-rehearsed witticism, Wynn then launched into a long story about an acquisition made from an Italian source that ended with him slipping into a raspy, Marlon Brando-esque rendition of ‘I made ’em an offer they couldn’t refuse’.

And ‘boast’ is the only word for it, since before the Guggenheim gang followed suit – all puns intended – by playing its own hand in Vegas, the anomalous grotto of High Modernism at the Bellagio conferred unique bragging rights on the owner. The side-show-barker gusto with which Wynn showed off his prized possessions to any and all comers – in my case a posse of equally proud possessors – was irresistible in its mixture of Damon Runyon patter and sheer gaucheness – and, for the same reason, impossible to parody. A sample: ‘You know, I love the Impressionists. They’re a great place for the people who come here to start. They’re like a training bra for budding art lovers.’ Having tossed off this well-rehearsed witticism, Wynn then launched into a long story about an acquisition made from an Italian source that ended with him slipping into a raspy, Marlon Brando-esque rendition of ‘I made ’em an offer they couldn’t refuse’. Like the previous joke, this one provoked a flurry of embarrassed looks from the group I was with, partly, no doubt, because Wynn was speaking directly to the wife of an Italian industrialist when he delivered the punchline. But he took no notice and continued to circle the room from one spotlighted picture to the next, basking in their glow and spouting wisecracks. The explanation for his obliviousness, like that for the blasting flood lamps, was that Wynn is almost blind. So while most blue chip collectors couple visual pleasure with delight in ownership, Wynn, arriving late to his declared passion for art, enjoyed only the latter.

Nevertheless, when he left the Bellagio – which had paid for that passion out of company funds – he took the paintings with him, and added to them. His greatest coup was buying Le Rêve (The Dream, 1932), the most alluring of the erotic images Picasso painted of his Lolita, Marie-Thérèse Walter. Yet amid the market delirium Wynn now seems to be cashing out and was recently on the verge on reselling Picasso’s masterwork. Were it not for a mishap that queered the deal, he would have received $139 million, more than twice the $60 million he paid for it. But it is anybody’s guess what it’s worth after Wynn stuck his elbow through the canvas, making a hole the size of a silver dollar in the sumptuous forearm of his sleeping beauty.

As it happens, I know this painting intimately, and it is as a truly shameless art lover that I keenly lament the damage done. For almost 50 years Le Rêve belonged to Victor and Sally Ganz, two of the most important postwar collectors not only of Picasso, but also of Eva Hesse, Jasper Johns, Robert Rauschenberg and Frank Stella. For about a decade I paid regular visits to their apartment, where I could look for undisturbed hours at the marvels filling it. One evening, when left alone with Le Rêve, I became so mesmerized by the girl’s reverie and so enraptured by the creaminess of the paint that describes her tilting head, plump limbs and full body that I reached up over
the chest above which the painting hung and caressed the smooth surface of her breast, which, unsurprisingly given Picasso’s mimetic genius and his palpable lust, captures the silken firmness of her skin with uncanny accuracy. Of course, the dream girl did not awaken, but I am tempted to think that my sinful male gaze become illicit male gesture somehow registered in the tactile zone where – as De Kooning suggested – flesh and paint are indistinguishable. And I imagined that, at least so far as the painter was concerned, my transgression was neither unanticipated nor unwelcome. Moreover, given the earthiness that complemented their elegance, I felt that a kind of permission had been granted me by Sally – a devotee of James Joyce and Vladimir Nabokov – and by Victor – who once disparaged 1980s’ painting by declaring that, unlike the things he lived with and loved, Neo-Expressionism didn’t give him a ‘hard-on’. Having impulsively stroked Le Rêve, I knew what he meant. I wonder whether in his clumsy ardour, Wynn or sighted collectors of his trophy-hunting kind are ever so moved by art, or if they will ever learn to seek satisfaction with a slow hand.

Robert Storr is a critic, curator and Dean of the Yale School of Art. He is Director of the 2007 Venice Biennale.