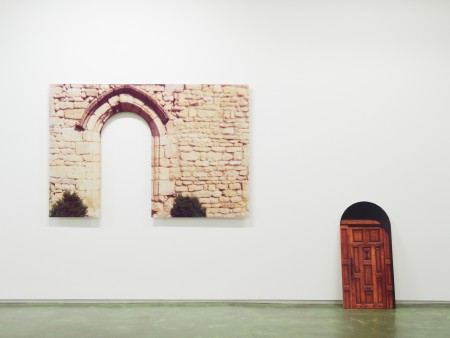 Born in 1971 and based in Kyoto, Yuki Kimura practices a sleight-of-hand Conceptualism that deconstructs the relationship between images and objects through the use of images as objects. Her recent installations incorporate found photographs, which have been subtly manipulated and then reprinted to create carefully staged sculptural arrangements. Not quite a survey, this exhibition at the private gallery of influential collector Tatsumi Sato reviewed the work that Kimura has made since 2005.

The earliest pieces in the exhibition explore the transmutation of object to image and back again. For example, two works from 2005 – which share the title get going into the details – comprise photographs of wood grain mounted on thin rectangular panels so as to look like pieces of wood. Kimura displayed these alongside actual wood panels hung like photographs. Using a similar approach, image and the shadow (st. elmo’s fire) (2006) is a chest-high line of 15 grainy black and white snapshots of objects that resemble fragments of Styrofoam cups, accompanied by a row of 15 thin, fragment-like objects made of frosted Perspex propped casually against the wall beneath the photos.

Elsewhere Kimura enacts a kind of aesthetic forensics. FORGETTING RANGE / gestures (2007) comprises a reprinted found photograph of two tuxedoed men posing in a garden while making unreadable hand gestures, and a second print in which the original image has been blown up and then cropped to emphasize the gestures, which appear celebratory but also imply the oblique significance of an in-joke or coded handshake. Artefacts emptied of meaning yet retaining their functions as semantic shells, the images that Kimura employs become the lynchpins for exercises in deadpan, formalist punning.

Comprising a collection of earlier prints and sculptural studies, and gathered under the title YOU MAY ATTEND A PARTY WHERE STRANGE CUSTOMS PREVAIL (2009), a new installation took this idea further, inverting the relationships between photographs and their armatures. The work was anchored by post-disembodiment (origin) (2006), a large wood-mounted photograph of a sun-baked stone edifice from which the outline of an arched door has been cut out. Resting against the wall next to the print was an almost one-metre-high panel made of stained wood echoing the contours of the door-shaped void, while two separate walls opposite supported, respectively, a similar panel made of tinted Perspex and the missing section of the photograph.

On a far wall was a companion piece, post-disembodiment (grain) (2006), a print of a photograph of weathered patio slats with its own door-shaped void, flanked this time by three sculptural ‘silhouettes’ of the missing section of the photograph and panels made of dark stained wood and tinted Perspex.

The most recent work, post-disembodiment (practice) (2009), consists of a collection of untreated wooden panels – possibly mounting boards – of which some correspond to the specifications of the prints and silhouettes, and others are of square, rectangular or circular shape. As suggested by this progression, the photographs are almost inconsequential; they provide the negative space that defines the voids.

The inscrutability of this installation in particular and the exhibition as a whole was, at times, stifling. Even as it exposes the mechanics of signification, Kimura’s brand of forensics does not lead to any satisfying conclusions. Yet her works are most successful when they entice the viewer to set aside the complacency of looking and join in the investigation. Embedded in Kimura’s intuitive experimentation itself is the reminder that, interpreting the material world through artefacts, we are as much reliant on generative processes as those that are deductive.