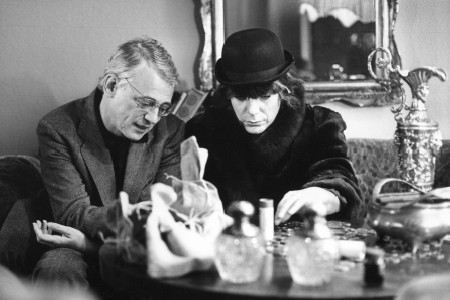 In the summer of 2006, a ‘cosmic egg’, as it was soon nicknamed, appeared in London’s Kensington Gardens. On several occasions, the temporary pavilion – commissioned by the Serpentine Gallery and designed by Rem Koolhaas in collaboration with Cecil Balmond of design and engineering firm Arup – hosted screenings of new works by the legendary German writer, television producer and filmmaker Alexander Kluge. The films were projected onto the inside of the translucent white spherical structure to create what the artist described as a ‘cinema dome’: an effect that seemed to draw equally on early cinematic experience – the numerous panoramic projections of Raoul Grimoin-Sanson’s Cinéorama at the 1900 Paris Exposition, for example – as on contemporary multi-screen installations.

Cinema and television provide valuable source material for artists to appropriate. Kluge goes a step further: rather than just appropriating from the media industry, he infiltrates it. The Serpentine Gallery’s programme consisted of several of Kluge’s ‘Minutenfilme’ (Minute Films, 2006–ongoing): extremely condensed animated sequences and edited found footage from a wide variety of sources, which the artist collates to create works such as Fünf Stunden Parzival in 90 Sekunden (Five Hours of Parsifal in 90 Seconds, undated), or a tribute to revolutionary Russian filmmaker Dziga Vertov (An Vertov, To Vertov, undated), which involves footage from Vertov’s films being shown on a kind of ‘screen-eye’ in an early Nam June Paik vein. In addition to these, an exemplary selection of Kluge’s ‘Magazine’ (Magazines, 1988–ongoing) was on display: informative television programmes of roughly sitcom length, exploring a truly encyclopaedic range of topics – from a staging of Vincenzo Bellini’s opera Norma (1831), through a collection of ballads from around the globe, to an interview with Jean-Luc Godard. Every so often the ‘Magazine’ knowingly betray their value as an educated German bourgeoise’s treasure box, and become slightly surreal, if not overtly Dada. Der flexible Unternehmer (The Flexible Entrepreneur, 2001) presents an interview with a carcass-meal manufacturer called Fred Eicke, played by Kluge regular Peter Berling, an actor, writer and producer whose career was closely involved with that of Rainer Werner Fassbinder. The film is sinister infotainment, for although Eicke is a fictitious character, his dealings with the vestiges of today’s ruthlessly commercial meat-processing procedures cannot be far removed from what is actually happening in the food industry. Berling appears in another work, Als Offizier und Philosoph (As Officer and Philosopher, 2005), in the role of a World War I German Major who, wearing a bandage under his metal helmet, tries to rationalize the desperate efforts of soldiers, depicted on a screen behind him, during the bloody stalemate of the Battle of Verdun in 1916. An invisible Kluge conducts the interview from off-screen, questioning whether the philosophy of Friedrich Nietzsche might have been the wrong one to guide Germany to victory in World War I. After all, he argues, Napoleon was beaten 100 years earlier by the philosophical idealism found in the writings of Immanuel Kant. Berling’s character shrugs and simply states that soldiers should never sleep next to explosives.

Over the past 20 years, Kluge has produced hundreds of these short, densely woven mini-essays under the umbrella of dctp (Development Company for Television Program) – an organization he founded to take advantage of a seemingly marginal clause introduced to German television legislation in the late 1980s, which stipulated that commercial broadcasters must outsource a certain quantity of screen time to third parties to ensure a diversity of televised opinion. Kluge has since established late-night slots on mainstream German television stations such as RTL or SAT1, filling gaps between reruns of old American sitcoms with his idiosyncratic features.

The result is, arguably, the most coherent body of work of all the New German Cinema filmmakers of the late 1960s. For Kluge was one of that generation of directors who set out to change a film culture that had hitherto largely consisted of dull, provincial ‘feel-good’ films, featuring extensive shots of panoramic landscapes, and who declared the end of ‘Papas Kino’ (daddy’s cinema) at the legendary 1961 West German Short Film Festival in Oberhausen near Cologne. In the ensuing decades Kluge has become one of the most productive protagonists of New German Cinema, alongside Werner Herzog and Wim Wenders, outpaced only by Fassbinder. Since the release of a comprehensive 16-disc DVD box set, which contains all of Kluge’s feature films and abundant bonus material1, it is possible to observe the unique evolution of an artist who started out as a lawyer (seemingly remembering the judicial aspects of his trade when the time came to pounce on a loophole in broadcasting law) and went on to become a filmmaker, philosopher, author and media mogul. In the process, and working almost exclusively on his own (over the decades he has had only a few non-technical collaborators), Kluge has developed an empire of knowledge reduced into a single ‘cosmic egg’ of subjectivity.

History is the key to this vast enterprise; which is to say history not in the sense of a dialectics of enlightenment, or of progress and reaction, but of a simultaneity that (over-)determines any given historical moment. One of Kluge’s most memorable characters is Gabi Teichert, heroine of Die Patriotin (The Patriot, 1979), a history teacher in a West German school during the time of the social–liberal coalition. Teichert, played by another of Kluge’s regular actors, Hannelore Hoger, enters a party conference of the Social Democratic Party of Germany (later renamed the Social Democrats). She has a problem with the way history is being taught in schools, believing that there is a discrepancy between history’s ‘end product’ – which is mostly dead people – and the source material that goes into history books. Acting as a kind of guerrilla reporter, she poses difficult questions about historicity to unsuspecting delegates at the conference (once again, the director himself remains off-screen).

This is not the only moment in Kluge’s canon when his films can be perceived as journalism taken to the next level. He frequently presents news through the context of history; a history that operates not only on the level of events, but also of emotions: one of his most famous films, Die Macht der Gefühle (The Power of Emotion, 1983), explores opera’s capacity to be a ‘power station’ of civilization. Kluge’s history is one of alternative possibilities; it is even, at times, a history of historicity. Very few of his films follow an orthodox narrative: in Die Patriotin, for instance, Kluge’s voice-over emerges from no less bizarre a place than the knee of a victim of the 1943 Battle of Stalingrad2. The remainder of the dead body acts as a zombie conscience, voicing Kluge’s central idea that each and every one of us, even (or perhaps especially) when we’re feeling a little disjointed, is still part of a bigger whole. This could be considered Kluge’s version of the Marxian theory of alienation, a version that is classical in the sense that it is truly aesthetic.

Take the famously controversial scene from his debut feature, Abschied von gestern (Yesterday Girl, 1966). Anita G. (played by Kluge’s sister Alexandra) is a young woman who crosses the border in search of a better life from socialist East Germany to the capitalist West in 1957, four years before the construction of the Berlin Wall. In a tragic reiteration of the way in which her Jewish parents were disowned and persecuted by the Nazis, the film recounts how Anita fails to integrate into society. In the beginning she is on trial for a negligible shoplift (or rather, as she understands it, a symbolic act of restitution). Later, in a scene that almost led to the film being banned, Anita and her boyfriend are fondling each other in bed when Germany’s national anthem begins to play on the radio. Without making any allowance for the solemnity of the moment, the lovers continue to touch one another uninterrupted, even humming and singing along to the tune. But Kluge takes this irreverence yet further, by adding shots of gravestones engraved with rabbits and Hebrew lettering, which clearly evoke the holocaust but also bring to mind Albrecht Dürer’s watercolour Young Hare (1502), which is an oft-copied icon in typical German living rooms.
Germany’s relative youthfulness as a nation state means that the country’s national identity has always been based on cultural rather than straightforwardly political definitions. Kluge visualizes these definitions by embellishing his narratives with several extra layers: a quote, a lithograph, a relief, a plate, a clip from a silent movie, an excerpt from a Romantic symphony or a Wagner opera; anything can become part of the inner life of his characters. They live with and within relics of history. To their year of birth they add other dates of importance: 1918 (the end of World War I), 1634 (generalissimo Wallenstein’s death during the Thirty Years’ War), 1268 (the battle of Tagliacozzo which marked the end of the House of Hohenstaufen dynasty).

In 1977, a national crisis was sparked in Germany by a band of militant left-wing terrorists known as the Red Army Faction (RAF). Deutschland im Herbst (Germany in Autumn, 1978) was the response to this situation by a group of 11 German filmmakers. Fassbinder contributed a painfully personal account of his relationship with his mother, while Kluge – assuming, once again, the role of news reporter – filmed the funerals of Andreas Baader, Gudrun Ensslin and Jan-Carl Raspe: three members of the RAF who had died in prison. Never before had the first solid democracy in Germany felt so threatened; but even in a moment like this, Kluge opted for the long-distance view: his contribution is largely a meditation on the idea of ‘German soil’ across the centuries. Since then, Kluge has launched his very own ‘indymedia’, and has taken the essayistic film to such a level that his work can readily be shown in a slot that is sometimes no longer than a minute. But no matter how short, within it we will always find a world.

1 Alexander Kluge, Sämtliche Kinofilme, 16 DVDs, Zweitausendeins, 2007 (www.zweitausendeins.de)
2 This even predates a famous quote by Joseph Beuys from 1981: ‘‘I think with my arms just as much as with my brain, and my knees.’ Cf. Monika Angerbauer-Rau, Beuys-Kompass. Ein Lexikon mit Gesprächen von Joseph Beuys, Dumont Verlag, Cologne, 1998, p. 386