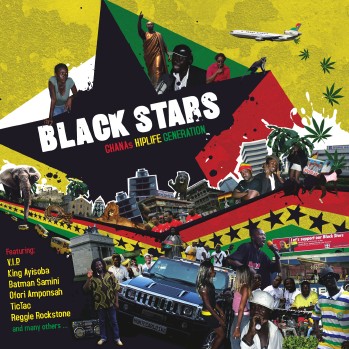 Despite hundreds of thousands of fund-raising dollars and a small fleet, in 1921 Marcus Garvey’s Black Star Line never made its intended repatriation run from the New World to Africa. Ships vanished. Cash escaped into mysterious pockets (W.E.B. DuBois blamed Garvey – leader of the Universal Negro Improvement Association and African Communities League – and Garvey blamed J. Edgar Hoover). In the years that followed, the Black Star’s mighty symbolism – as an icon of homeland and of black emancipation – went viral with gleeful homelessness: you can find it in the centre of Ghana’s flag, in the name of their national soccer team (not to mention shipping line) and, with hip-hop’s omnivorous logic, in the title of an excellent new CD presenting contemporary Ghanaian pop: Black Stars: Ghana’s Hiplife Generation.

Take highlife – an upbeat, optimistic genre whose sweet guitars and jazz horn play exploded to become one of West Africa’s most popular 20th-century sounds. Add an underlying love of reggae, hip-hop and R&B; wrap it up with melodic vocals in Twi, Fanti, Ga, Ewe, Hausa and that other one, English; put special emphasis on luscious sung choruses – and you’ve got hiplife.

‘Combination-combine-combine’ is how Nigerian breakdancer-turned-hiplife vocalist Tony Harmony describes his sound. Stylistic formulas mutate from hit to hit – hiplife is more an attitude than a genre. Here he gets remixed by a German producer (changes in immigration laws made cities such as Hamburg attractive to Ghanaian migrants); the key, constant undertone in this compilation is musical fluidity. Hiplife reinvigorates its history using relatively inexpensive digital tools, and that history includes Busta Rhymes (revered and ripped off: listen for Tic Tac’s verbal allusions to Busta’s woo-ha phraseology in ‘Kangaroo’) and the flamboyant Nigerian highlife trickster Sir Victor Uwaifo.

Listening to Black Stars’ effortless polyglot switch-ups can make a multilingual European feel parochial. In ‘Edua Neb U’ – to pick a juicy example – after Nkasei’s Twi singing, Reggie Rockstone drops verses in English, using media apparitions of the Dark Continent as a starting-point (‘I’m trying to see an African 20th Century Fox’) to address you, outsider – then suddenly Twi lyrics return, the discussion shifts away from your understanding and you go from centre audience to incidental. But it’s too late: the music pulled you in while you were following the words, and now you’re moving. Inside/outside metaphors look cheap against such richness. The beat on ‘Edua Neb U’, and on two other tracks on Black Stars, comes from the Ghanaian super-producer Jay Que. He layers catchy arrangements around intricate sampled beats without making either seem dense.

In the brave new world of African music repackaged for Western audiences, Black Stars stands out for its populism. The music here is not only contemporary: it’s hot in Ghana, now. Plus we get stuff like Tic Tac’s dance craze ‘Kangaroo’ or the Pidgen All Stars’ ‘Toto Mechanic’, a blatant pro-sex electro anthem that sparked a catchphrase despite a ban. The bigger artists here sell tens of thousands of copies locally, yet their music still works when flung into audiences who cannot locate Ghana on a map, let alone distinguish Twi from Hausa. But who needs maps when we’ve got URLs? Black Stars’ MySpace contains YouTube videos – hiplife is music for dancing. Faster than you can say ‘Kwame Nkrumah’, the digital plugs back into the sweat and rhythm feedback of now. Hits aimed square at the Accra dance-floor ring in cosmopolitan ears. Black Stars ships in all directions.