Eighty Years Ago, Both Sigmund Freud and the ‘Degenerate’ Art Exhibition Came to London

Two new exhibitions, at the Wiener Library and the Freud Museum, fastidiously document these landmark moments in history

Sometimes I wonder what it might have been like to know my grandmother. Her name was Zoryka Klein and I’ve been told she was beautiful, had an extremely sweet tooth and baked the best poppy seed cake in the Vojvodina. You can’t miss someone you’ve never known. But I do.

My grandmother was murdered in Auschwitz in 1944. I was thinking about her as I walked through the scuffed sunshine towards London’s Wiener Library, which was founded in 1933 and is one of the world’s oldest Holocaust archives. It is currently celebrating the 80th anniversary of ‘Twentieth Century German Art’, an exhibition that was held at the New Burlington Galleries in 1938 in response to another exhibition, ‘Entartete Kunst’ (Degenerate Art) that was mounted in Munich in 1937 by the Nazis for ‘education purposes’.

‘Degenerate Art’ included 740 paintings, sculptures and drawings selected from the 20,000 that had been removed from 32 of Germany’s state-run museums not only for being ‘bad art’, but because they were ‘sick’ and contained qualities of ‘mental disease’ and ‘weakness of character’. As Cicero opined, ‘when you have no basis for an argument, abuse the plaintiff’ which in this case included Otto Dix, Wassily Kandinsky, Oskar Kokoschka, Henri Matisse and others. The exhibition attracted more than two million people and the abuse directed towards the artworks was venomous. Lines of jagged, black text were slapped against walls: ‘Nature as seen by sick minds’ read one. ‘Cretin and whore’ shouted a second. ‘A revelation of the Jewish racial soul’ claimed a third. The exhibition asserted that everything on show was the product of Jews or Bolsheviks, although in fact only six out of the 112 artists represented were Jewish while the rest were German or from other European countries such as Denmark and Norway. But this was the Third Reich doing what it did best, controlling every aspect of life, including what it considered ‘good’ or ‘bad’ art: in other words, not only the consideration of culture, but its construction.

And that – as they say – might have been that, were it not for a searing riposte from across the North Sea. Combining the efforts of four people – the art dealer Irmgard Burchard and her husband, the artist Richard Paul Lohse, the gallerist Noel Norton and the art critic Paul Westheim – the ‘Twentieth Century German Art Exhibition’ was staged at London’s New Burlington Gallery in 1938. Over 300 works were displayed, the majority of which were by the same artists whose paintings and sculptures had either been confiscated by the Nazis and/or scorned as ‘degenerate’. Sourcing the work proved complex. A large number of the contributors, which included German collectors and artists, were in exile.  Max Beckmann, for example, had left Germany for the safety of Holland on the very day that the ‘Degenerate Art’ show opened in Munich.

The ‘Twentieth Century German Art Exhibition’ was a huge success. The African American bass baritone and actor, Paul Robeson, sang at the opening while standing in front of Beckmann’s triptych Temptation – sometimes referred to as The Temptation of St Anthony (1936-37) – and the exhibition was so popular it was extended three times. In fact, according to the press release, it was ‘not only the first major retrospective of German modernism in the English-speaking world, it was also the largest international response to the Nazi campaign against so-called degenerate art.’ Nor was Adolf Hitler unaware of London’s counter-argument to his ‘propaganda’ exhibition. His denunciation of the New Burlington show in a speech he gave in Munich in 1938, prompted the newspaper Völkischer Beobachter to print a ‘review’ of the British exhibition summarizing it as ‘Judaism and Moscow’ lying to the ‘politically clueless’ English.

All of this is fastidiously documented in the exhibition at the Wiener Library, ‘London 1938: Defending “Degenerate” German Art’ which – alongside display cases containing photographs, letters and other ephemera relating to the artists from both the German and British shows – also includes two of the New Burlington Gallery exhibition’s original works: Max Slevgot’s The Panther (1931) and Emil Nolde’s The Young Academic (1918). For once, however, rather than the paintings occupying centre stage, it’s the back-story of the works’ owners that – rightfully in this instance – takes precedence. When, for example, the painter Max Liebermann died in 1935, he left his painting, Professor Albert Einstein (1925) to his wife Martha. Three years later, she sent the painting from Berlin to the New Burlington exhibition, after which the organizers tried to find a buyer for it. This was no doubt on the instructions of Martha herself as, being a Jew living in Berlin, her financial circumstances were precarious. A buyer was eventually found, but whether Martha received any moneys remains uncertain. What is known is that by 1940 Martha had been forced to sell her home and in 1943 – aged 85 – she received notification that she was to be transported to Theresienstadt concentration camp in German-occupied Czechoslovakia. A few hours before she was due to be taken away, Martha Liebermann committed suicide.

If Sigmund Freud had been an artist his output would undoubtedly have been of the type vilified in ‘Degenerate Art’. Replace brush strokes with Freudian slips, dreams and sexuality and you might have the work of an Otto Dix or a Max Ernst. Of course, Freud was not an artist, even if there are those who feel his case studies read more like fiction than fact. In 1938, he was a renowned psychoanalyst, one who was forced to flee Vienna on 6 June 1938, following Hitler’s annexation of the Austrian capital earlier the same year.

‘Leaving Today: the Freuds in Exile 1938’ at The Freud Museum in London marks the 80th anniversary of psychoanalyst’s arrival as a refugee in the UK. Focusing on Freud’s forced departure from his homeland (together with his wife Martha, their youngest daughter Anna and their maid, Paula Fichtl) the exhibition displays a scattering of personal items. These include the Loden overcoat Freud wore on the long journey from Vienna to London, a small box of cigars and a suitcase containing his toiletries. Of most interest however, is a glass cabinet filled with a nightmarish fretwork of bureaucratic documentation that the Freuds were required to fill out in order to leave. These include certificates of origin, tax clearance certificates, birth certificates and Federal Police Directorate certificates confirming no one had a criminal record, all of which you can’t help but think, are Freudian in themselves. After all, given the Nazis wanted the Jews wiped off the face of the earth, it seems perverse (aside from the fact they made money by levying exit taxes) how hard they made it for them to depart. But, with the help of a few friends in high places, the Freuds did eventually escape. However, Sigmund’s four elderly sisters – Rosa Graf, Dolfi Freud, Mitzi Freud and Pauli Winternitz – stayed in Vienna and were not so fortunate. Dolfi died in the Theresienstadt ghetto while Rosa, Mitzi and Pauli were murdered in the Treblinka II death camp.

Freud and his entourage travelled to Paris on the Orient Express and then on to sanctuary in London, first at an address on Elsworthy Road and finally to number 38, Maresfield Gardens, London NW3. Step over the threshold of this magical house (now The Freud Museum) and not only do you sense the tranquility such a refuge must have afforded the family, but you are also presented with a fascinating collection of Freud’s professional and personal artefacts. One of the former, the painting The Wolf Man’s Dream by Sergei Pankejeff (1886–1979) a patient of Freud’s, might well have been of the type denounced by Hitler – whose own ambitions to become an artist were famously destroyed when he twice failed the entrance exam to the Academy of Fine Arts Vienna – as ‘degenerate’.

For the Nazis, modern art was a pollutant, a filth that sprang directly from the verminous minds of all the Third Reich’s hated targets: Jews, gays, gypsies, communists and the mentally and physically disabled. As such, both it (and they) contaminated what it meant to be German. Eradication was, to the minds of the Nazis, the only solution. It is something of a victory that the work of so many of the so-called ‘degenerate’ artists – along with the writings of Sigmund Freud and other refugees from the Nazi terror – is gloriously, resplendently visible and so deeply imbedded in the human psyche.

When I leave the Freud museum I think once again of my grandmother and of a photograph that I keep of her on a shelf by my bed. I never knew Zoryka Klein, but I will never forget her. It’s comforting to think some things cannot be erased. 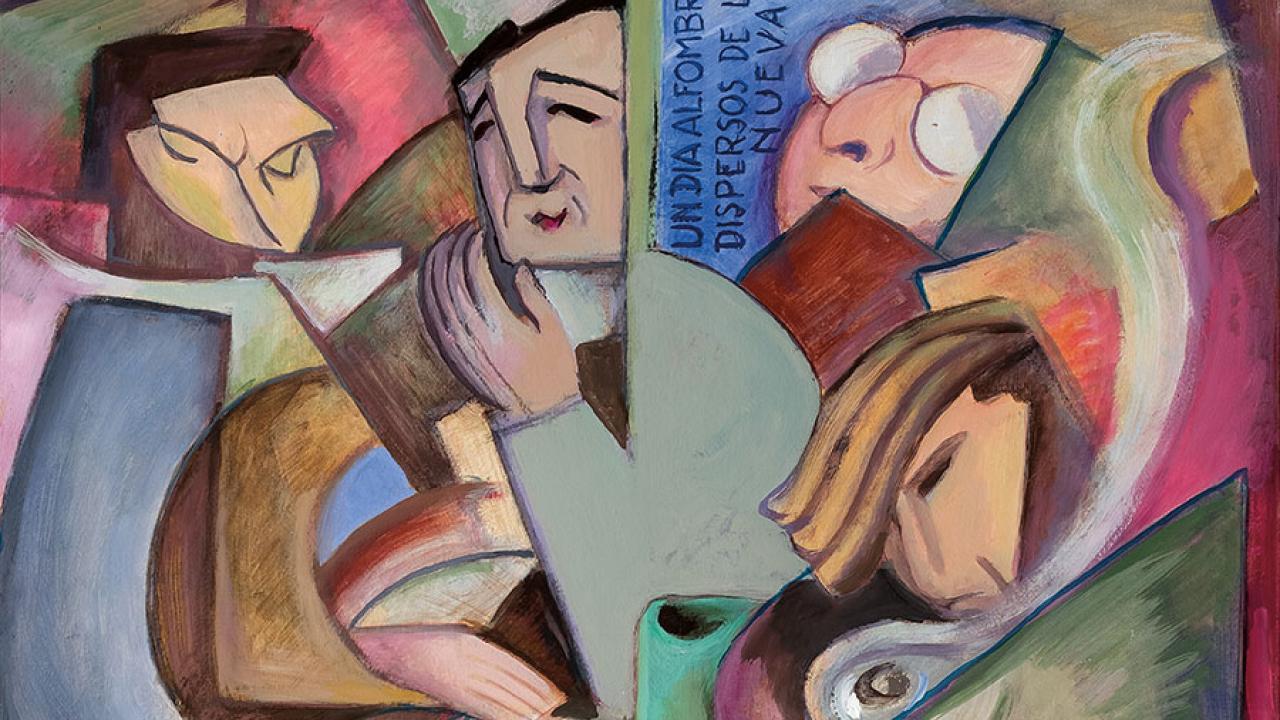