BY Elizabeth Glickfeld in Profiles | 09 SEP 13 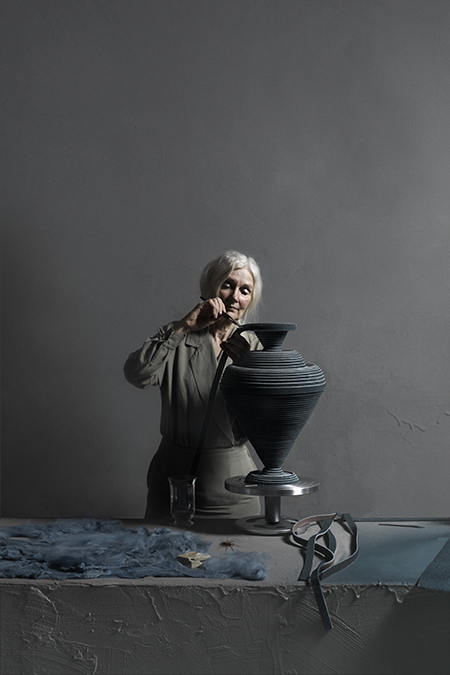 When the Amsterdam-based designer Siba Sahabi released a new collection of handmade carafes, urns and cups earlier this year, she did so in conjunction with a film. Emulating the appearance of hand-turned ceramics, the vessels were made on a potter’s wheel by coiling strips of felt coated with paint on both sides. The four-minute accompanying film, titled Pallas Athena (2013), on which Sahabi collaborated with Lisa Klappe and Niels van den Top, shows three women solemnly performing the production process. Pallas Athena was, for Sahabi, an opportunity to bring into the public domain the research that often informs a designer’s work, but which may not be evident in the resulting object. Of Iranian heritage, she is interested in ancient Greece as a bridge between East and West. Sahabi’s source materials included Laconian ceramics, an early 20th-century photograph of a woman in a Madeleine Vionnet dress, and the mythology of the tempestuous Greek goddess of crafts, art and war, after whom the film is titled.

In 2013, a simple product shoot no longer seems to be enough to promote a designer’s work. As Alexander Groves of London-based Studio Swine notes: ‘Film is a powerful tool especially now that the most important place to exhibit is online.’ This has been bolstered by the accessibility of desktop editing software, the proliferation of platforms such as Vimeo and YouTube, not to mention online design portals such as Dezeen. To the designer’s means of dissemination, one can now add the moving image to the existing complex of object, photograph, press release and lecture.

Film was an important vehicle for Studio Swine’s 2011 Sea Chair project, a collaboration with Kieren Jones, from its inception. The United Nations currently estimates some 100 million tonnes of plastic contaminate the world’s oceans. As a consciousness-raising exercise, the designers devised a process whereby waste plastic collected by trawlers can be trans­formed onboard into three-legged stools with the aid of a makeshift furnace. The result is a contemporary recasting of an age-old seafaring carpentry tradition. Earlier this year, Studio Swine made a three-and-a-half-minute film of the same name – later followed by an open-source instruction manual – with Dutch filmmaker Juriaan Booij. In artfully constructed shots punctuated by colourful objects – a red bucket, a yellow raincoat, orange twine, blue rubber gloves – Sea Chair documents the making of a stool interspersed with romantic images of life at sea.

Film is well suited to those contemporary designers who are more interested in inventing processes than objects. This is a tendency spurred by the 21st-century anxiety about the provenance of manufactured objects – a reluctance to feed invidious cycles of production and consumption. Tim Simpson of the London-based Studio Glithero concedes: ‘The idea of bringing things into the world weighs on us heavily.’ Avoidance of the factory, however, often results in objects produced in one-off or limited editions, depriving many peope of tangible engagement. Film provides a different kind of access to a wider public.

In some ways, this isn’t new. From the 1950s to the ’80s, Charles and Ray Eames often made films as part of their studio output, whether in a spirit of experimentation, to demonstrate new industrial processes or to wage a battle of communications on behalf of the us during the Cold War era. Meanwhile, in the 1960s and ’70s, Italian radicals such as Superstudio used film to visualize a Utopian life without commodities. But as design websites become repositories for all manner of videos – including interviews and back-stories – a new genre of design film is evolving. These design films go beyond a neutral documentary style and should not be confused with being transparent about how things are made. Featuring ambient soundtracks, constrained colour palettes, purposeful lighting and stylized cinematography, they theatricalize bespoke methods of production.

Since they began their practice eight years ago, Glithero have made increasingly sophisticated films. Poured Bar (2011) records the making of a bar top composed of layers of fast-hardening concrete. Simpson, however, is careful to note that, ‘There is a difference between bringing someone into your workshop and showing them what you’re doing and the idea of revealing something in a more controlled way.’ Poured Bar purposefully eschews showing the realities of its own fabrication. In the film, Sarah van Gameren – a partner at Glithero – pours a bucket of fluid which is the same colour as the cobalt blue of the pristine workmen’s coveralls she is wearing. Shot from above, the liquid searches for spontaneous form and volume on its journey. It cascades and then gathers in concentric layers before settling. Van Gameren repeats the action, pouring a second band of liquid alongside and overlapping the first. After repeating the ritual once more, the viscous mass is carefully lifted and flipped over. The amorphous three-tiered stripe has become solid. Poured Bar attempts to crystallize a moment of becoming, when materials turn into things. The film essentially advances according to plot conventions; suspense builds before climaxing in a big reveal. Glithero believes narratives can reinstate people’s meaningful attachment to objects.

If alienation from mass production has sparked a return to craft, the characteristics of digital media have also induced what design writer Ellen Lupton calls ‘a new crack at materialism, a chance to re-engage with the physicality of our work’. By returning to a notion of design that emphasizes production over conception, designers are purposefully reacting against a world dominated by immaterial labour and claiming authenticity for what they do. In the West, where manufacturing mostly occurs in faraway lands and where many of the objects we use operate via an invisible dance of electrons, it is not only handmade processes that designers are choosing to aestheticize.

Ultimately, though, these films have an uneasy relationship with the medium via which they circulate. On the one hand, they are highly choreographed visions of production that occur in dream-like spaces, offering a romanticization of industry and a return to a notion of design that emphasizes making and physicality over conception. But by resorting to film, contemporary designers are communicating their re-engagement with the material aspects of design by turning the audience from users into spectators. They avoid the cycles of production and consumption associated with the economy of mass-manufacturing only to feed another cycle of production and consumption – that of the information economy.

They also eliminate the mess of making – what sociologist Richard Sennett calls the inevitable ‘dialectic between the correct way to do something and the willingness to experiment through error […] the probing craftsman does more than encounter mess; he or she creates it as a means of understanding.’ Paradoxically, as these films accede to the forward thrust of narrative conventions, they streamline the process of making into the efficiency of an assembly line.

Earlier this year, the London-based duo Cohen van Balen premiered their new film at Milan Design Week. 75 Watt (2013) is the culmination of research undertaken in the centre of global manufacturing, an interrogation of the ubiquitous fine print that reads ‘Made in China’. Other designers have blurred the hierarchy of means and ends by distributing infinitely replicable videos about the making of limited-edition objects. Cohen van Balen have carried this tendency to the limits of absurdity by designing a redundant object which functions only to dictate the movements of its makers. With the help of choreographer Alexander Whitley, the film shows the assembly of a white plastic quasi-appliance by factory workers in Zhongshan, in the Pearl River Delta. Cinematic mannerism is supplemented by overtly formulaic choreography. The result is absorbing. As the conveyor belt moves along, its attendants wind, swivel, slap, stand, sit, pull, thread, staple and loop. Perhaps, oddly, it is this rhythm of a coordinated dance that we really miss.

Elizabeth Glickfeld is an Australian design writer based in London, UK.