Some of Gary Webb's sculptures talk. 'Hello, hello, get me out of here' emanates from a tiny toy coffin suspended before a rich expanse of rigid blue plastic.

A large composition in orange, lime and tan Perspex called Love on Rocks (2000) spouts gibberish in comic approximations of several half-recognizable languages; an alarm goes off when you make a sudden noise in the proximity of Clap (1997); Paranoid-mountain (2001) - a metal doodle, an assortment of Perspex boxes, and a large lump sprayed black and green - even does a 'human beatbox'. Of course, none of these aural elements assists our understanding of the works; instead they make us think the sculptures are taunting us, in our bafflement, like imbecilic, obnoxious kids. It's appropriate that the gizmo that makes Clap shriek once belonged in the belly of a toy spider.

At first glance Webb's sculptures casually resemble proper abstract sculpture. But proper abstract sculpture doesn't usually come accessorized - if it did it would know better than to flaunt the fact. When a compact disc player is the source of the sound in one of Webb's sculptures, as is the case in Love on Rocks and Paranoidmountain, then he makes you aware of the fact by nestling the gear in the heart of the sculpture on polished, elaborately shaped parts that act as a shelving system or plinth. The accessories in other works take the form of jewellery, words, neon and readymade elements such as toys, syringes and mannequin heads, each of which undermines the formal and ontological coherence of the works' main abstract elements. In I Love Black Music (1998), for example, gold necklaces encircle a mannequin's head that rotates on a Space-Hopper-shaped base like an oversized, funky character from the whiter-than-white Cluedo boardgame. Were it not for the jewellery and the dummy's head, I Love Black Music could be a slightly skew-whiff and uncharacteristically brown 1960s Philip King experiment in cone shapes.

Webb's use of language is similarly cock-eyed. The word 'kiss' spelt out in peachy neon in Mirage of Loose Change (2001) sheds as little light on the work's formal and material eccentricities (broken black granite, meandering chrome, a missile or fish-shaped wooden object, assorted Perspex sections) as its bizarre, yet appropriately seductive title. Ha Llo (1999) - should that be 'halo?' (why the spacing? why the Welsh double 'L'?) - has 'come on on' embossed on the sculpture's green cylindrical foot (Why the double 'on'? Why the peculiar way the words are spaced, which hinders the reading?). Clearly, these titles, and instances of language and other graphics (mathematical symbols, punctuation marks) within the sculptures themselves, fail to envelop the works symbolically. Webb's words, sounds, titles and readymade bits and pieces instead seem to misfire, both formally and symbolically, adding further loose ends (loose change?) to what are already overloaded structures. Looking at Untitled (1998), for example, what's that wind-up joke-shop ear doing spinning on the back of a brown form, elegantly abstracted from a toy truck, which itself bisects an uneven section of what looks like green garden trellis hung at right angles either side of the edge where wall meets ceiling?

Often it's the most seemingly capricious elements of Webb's sculptures (which look casually applied during a kind of stupor) that turn out to have concluded the work. Webb was wondering what might finish off a sculpture that came to be called God Knows (1998) - a multicoloured cylinder on glass tentacle-like tubes that's over a metre and a half high - when it struck him that all it needed was the addition of a small toy apple, in halves, stuck to the ends of two of the tentacles, and a palm-sized paper buckle fitted on the top edge of the cylinder. It's the difference between what Webb would do to finish a sculpture and what just about any other artist would do to complete a composition that makes these works so beguiling, so irritating, so alarming and, considered against the backdrop of Modernist abstraction, so purposely irreverent.

But it isn't just these finishing touches that mark out the sculptures as contrary; they are perverse at every turn. Take Cock and Bull (2001), for example: on one level you can begin to approach it as a formal exercise in the interplay between circles and polygons, reflective and transparent surfaces, bold primaries and recessive naturals, openings and enclosures, solid forms and loose elements. But the work's overabundance of materials (Perspex, plastics, copper, stainless steel, plywood, porcelain and more besides) and its skewed, awkward symmetry render this reading insufficient and faintly absurd. It soon occurs to you that Cock and Bull is flirting with the suggestion that it might be a functioning object, which itself is the platform for an abortive narrative. The sort of five-sided shape in plywood suggests some kind of shelter or coop for a small animal, at least when considered alongside a little porcelain saucer that sits on a black Perspex surface nearby. By evoking absent birdseed or a small pool of water, the saucer seems to convert the shiny square metal chips piled up in a semi-circle along one edge of the red Perspex base into a pile of droppings. The whole piece is topped off by a small element in yellow plastic and burnished metal. Because it's the most detailed part of the sculpture it seems the most symbolically determined, though what it refers to is typically imprecise. The metal part slightly resembles a rider with arms outstretched on a galloping horse, but in relation to the overall sculpture it becomes some kind of bird, or at least its head feathers, perhaps because you can't help associating the canary yellow of the plastic bit and its two dimensional cartoon-like outline with Woodstock and Tweety-Pie - a cultural association strong enough to override an awareness that bright yellow birds are a rarity in nature. This implied narrative is reinforced by the 'Cock' of the title; when seen this way the top element suddenly appears a lot more animated, as if it is set to hop about the hoops, platforms and chambers of the piece in pursuit of various bird-like activities. And yet these narrative suggestions are fugitive in the extreme, always on the verge of dispersing, like a pictorial scene imagined in a cloud formation on a windy day. After all, it's not often that you get to read squares of shiny metal as bird droppings.

Contemplating Webb's work is like looking at the serious issues of Modernist abstract sculpture, especially British New Generation sculpture of the 1960s, through the wrong end of a telescope. Instead of the evolutionary Modernist trajectory of abstracting elemental forms from nature, Webb's sculpture seem to treat abstraction as a representational idiom like any other. Rather than boiling images down to their underlying abstract essences, Webb constructs a set of abstract units, whose over-familiarity already makes them seem clichéd, camp and parodic - Day-Glo disco Constructivism, high street biomorphism - which he then sets about customizing and accessorizing. Webb's cock and bull tales, the toyshop gizmos, the half-baked titles and destabilizing 'foreign' elements evoke a thoroughly dissipated Modernism back home in the forbidding white cube after a day's retail therapy and an inebriated night on the tiles. 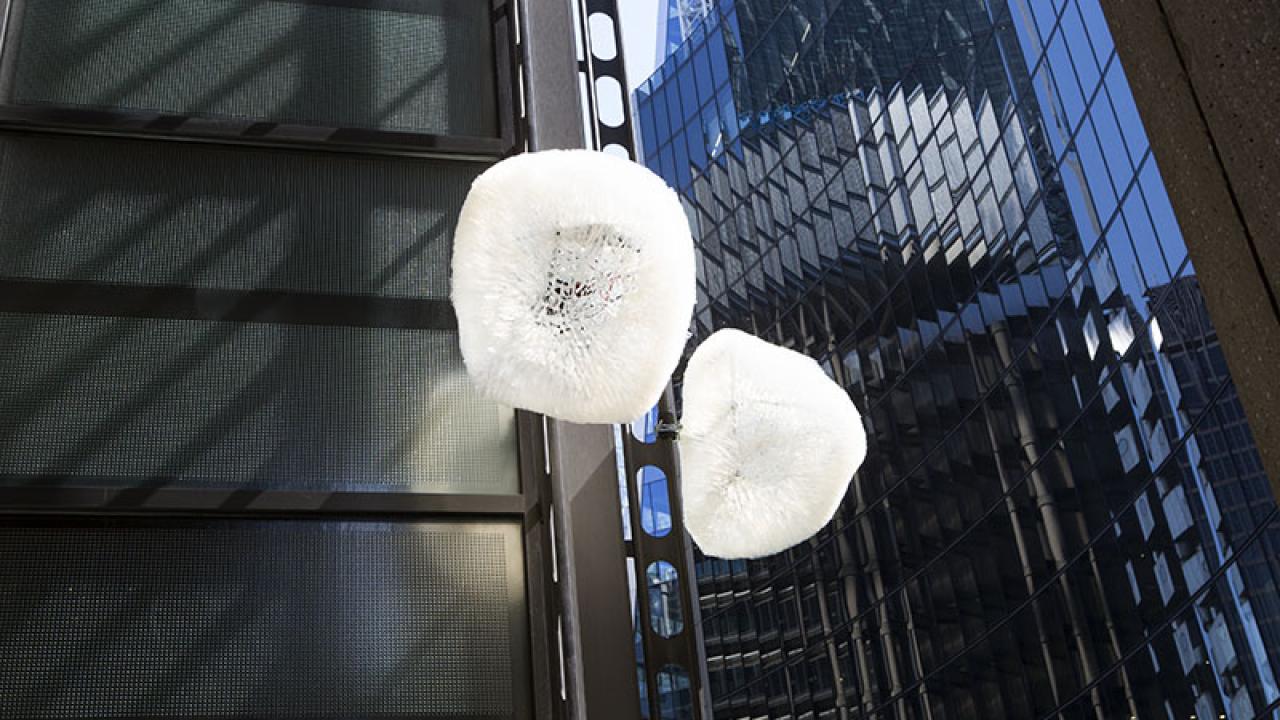 The City of London’s annual sculpture park reveals the complex interplay between global corporations, urban space and ‘the public’