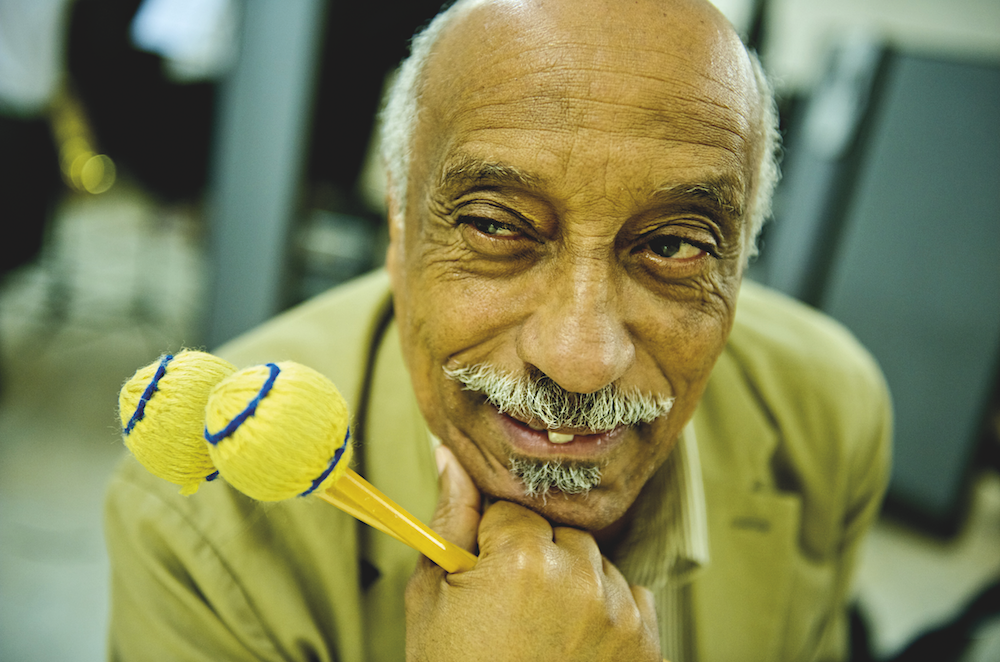 Hot on the heels of collaborations between Amp Fiddler and Sly & Robbie, and Horace Andy with Ashley Beedle, the third installment in Strut Records’ ‘Inspiration Information’ series pairs Ethiopian musician Mulatu Astatke with jazz outfit The Heliocentrics. Astatke is one of Ethiopia’s most important and influential musicians. Trained in London, New York and Boston, the 66-year old composer, arranger and virtuoso vibraphone player broke new ground in the 1960s and ‘70s as the pioneer of Ethio-jazz – a radical and compelling style that seamlessly wove traditional Ethiopian folk melodies, tonal scales and Coptic church music with American and European Latin, funk and jazz. Popularized by Buda Musique’s fantastic series of ‘Ethiopiques’ compilations and the soundtrack to Jim Jarmusch’s film Broken Flowers (2005), Astatke’s music has today found new audiences. However, the results of this fling with The Heliocentrics are mixed. Hyped as a far-out, progressive jazz ensemble following in the footsteps of ‘Sun Ra, James Brown, David Axelrod and all manner of psych, Afro and Eastern sounds’, Heliocentrics are without doubt a technically brilliant group of musicians, yet, for all the experimental pedigree of their influences, a strangely polite band. Out of 14 tracks, only half actually feature Astatke as a musician, writer or arranger, his absence on the other seven tracks leaving his collaborators sounding comparatively conservative by contrast.

Dreamy piano arpeggios, and a tense, burbling analogue synthesizer begin the album, interrupted by a steady tattoo of congo rhythm, masenqo (an Ethiopian stringed instrument from which this opening song also derives its title) and melismatic vocal line which launches then into a solid, loping groove, decorated with spindly jazz chords and fuzz guitar reminiscent of 1960s’ John Barry film music. It’s more hip-hop-inspired than Ethiopian, but is swiftly followed up by ‘Cha Cha’ and ‘Mulatu’, which both bear unmistakable north-east African inflections. Tracks featuring Astatke such as ‘Dewel’, with its langorous ascending and descending bass, and the rolling, ‘Chik Chikka’, in which warm, slinky clarinet and sashaying brass dance over a contrapuntally complex bedrock of guitar and bass are as strong as anything from Astatke’s back catalogue, but also, in their hypnotic intensity, oddly reminiscent of Can’s more world music-inspired moments.

Left to their own devices, however, Heliocentrics’ sound is more early 1990s acid jazz than Ethio-jazz. ‘Live from Tigre Lounge’ and ‘Blue Nile’ plod along like a funk band going through the motions, sprinkled with just enough retro or ethnic flourishes (that John Barry fuzz guitar, or a floating African vocal line) to stop the listener from drifting off completely. As for ‘Chinese New Year’, all I could think of was the kind of blandly ‘chilled’ jazz-funk you might hear burbling in the background in a gastropub or on a television commercial for mobile phones – all technique but no soul.

The closing track, however, is outstanding. ‘Anglo Ethio Suite’ is open and exploratory. Here, Heliocentrics sound far closer in spirit to Sun Ra, Alice Coltrane or Pharoah Sanders than at any other point on the album. Unfolding slowly, ‘Anglo Ethio Suite’ builds gradually around a simple, repeated bass riff, complimented by Astatke’s slow, chromatic chords and melodies, and a masenqo part that explodes at the close of the album with all the coruscating power of John Cale’s viola drones for the Velvet Underground. For all its shortcomings, Inspiration Information 3 leaves the listener in no less doubt about Astatke’s talents, but, as far as collaborations go, with the feeling that there’s truth to old adage that you should never meet your heroes.