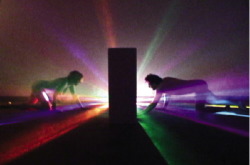 There's no money shot. No gymnastic contortions. No splayed labia or engorged male members or close-ups of actual penetration. No moans, grunts or heavy panting. And unlike the Paris Hilton tape, which is mostly devoted to images of mutual oral pleasuring, there's not even any foreplay. For a video depicting two people fucking, Behind the Pedestal (2003) shows very little. In fact the whole thing, shot in a single wide take, ends a bit prematurely and is rather anti-climactic. Four and a half minutes from start to finish, the actual copulation clocks in at just under 30 seconds. The two people, male and female, crawling into frame from opposite sides, are back-lit by a starburst of coloured lights emanating from behind the rectangular silhouette of a pedestal at the centre of the image. When they meet and orientate their bodies in the missionary position, their pelvic sections are strategically covered by the pedestal. Our view thus bifurcated, we watch as their heads bob on the left while their entwined legs move independently on the right, hers occasionally treading the air like a crushed daddy-long-legs. Unnervingly mechanical, the sex occurs with all the drama of brushing one's teeth. The couple's disengagement provides the most interesting moment, their awkward fumblings rupturing the somewhat sanctimonious atmosphere before they crawl off in opposite directions.

So why is this video so fascinating to watch? By turns funny and annoying, clever and just plain dumb, tender and boring, beautiful and self-indulgent, loaded with irony yet perfectly sincere, Behind the Pedestal refuses to conform to expectations or settle into one genre, one idea. Second by second it mutates under our gaze and gets under our skin. Part science fiction, part underground movie, the video channels 1960s psychedelia into our 21st-century obsession with 'reality' via a slanted lo-fi Futurism. Embracing the very mechanism of sublimation that characterizes most art, real-life couple Stoltman and Ruby suggest that artists can have beauty and their pleasure too. Shunning the hardcore, bad-boy shenanigans of the Koons/Cicciolina collaboration, the single-take/unmoving camera is closer in spirit to the films of Andy Warhol. Yet Behind the Pedestal keeps us at a safe, very un-Warholian distance. Resolutely apolitical, the sex in the video is neither transgressive nor abject. It is not intended to subvert power structures or represent marginalized subjectivities. It steers clear of sticky gender issues and skirts the discourse of male transcendence versus female immanence.

Comfortably straight and white, Stoltman and Ruby instead give us a meditation on broader notions of absence and presence, our desire for connection and a glimpse into our origins. The strong vertical silhouette of the pedestal at the centre of the image shifts between solidity and disappearance. It becomes a phallus that stands in for Ruby's hidden one. But it is also a void that calls to mind notions of the hidden female interior, Stoltman's womb. Strangely egalitarian, this phallus/void simultaneously penetrates and engulfs both partners. Passing through this portal and each other, they emerge on the other side not transformed but re-formed, reconstituted in their individual identities, their original roles, and separate once again. Thus, while the pedestal may reference the monolith in 2001: A Space Odyssey (1968), it is not a vehicle for transcendence or evolution. Or is it?

Shortly after completing Behind the Pedestal, Kirsten Stoltman became pregnant with her first child. Whether intentional or not, it is impossible now not to consider the video in relationship to Freud's theory of the primal scene and the desire to witness our own conception. Perhaps the real power of this video lies here: it touches on the way our sense of being in the here and now is dependent on the things we leave behind.