BY Christopher Bedford in Frieze | 01 NOV 09 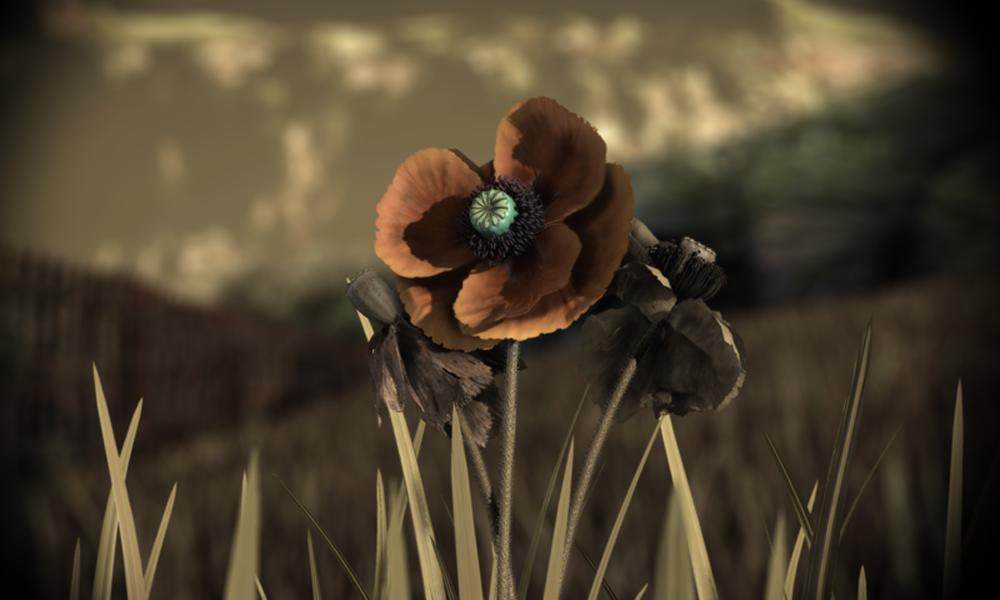 ‘Mad World’, Tears for Fears, 1982 The television commercial for the wildly successful Xbox 360 video game Gears of War (2006) – which has, so far, sold more than five million copies – opens with an image of a war-torn cityscape silently smouldering; it radiates as much sinister Gothic pathos as a Tim Burton film. As a view of this digitally-rendered war zone unfolds, a hunched, metal-clad Übermensch appears. He stares dolefully into a pool of water, alone, apparently, in the aftermath of a great battle, his square jaw, weathered skin and narrowed eyes oozing the stoic resolve of the most iconic anti-hero. As this sensitive brute cradles the semi-obliterated face of a porcelain putto in his palm – a passage so heavy-handed it is almost camp – the ground around him begins to erupt and, in an effort to escape, the commando flees quite literally into the jaws of a ravenous alien beast; part scorpion, part beetle and wholly flight-of-fancy. The commercial fades to black just as our nameless hero unleashes a hail of bullets upon this seemingly unassailable monster, the drama of this David-and-Goliath encounter emphasized by a moody tenebrism worthy of Georges de La Tour.

Among the many oddities of this commercial is the sound. Not once are we privy to an explosion, the crunch of gravel underfoot, fire crackling, the thud of exertion, gunfire, or the roar of the predator. Instead, the vignette is accompanied by the dulcet tones of Gary Jules and Michael Andrews’ maudlin, balladic cover of Tears for Fears’ 1982 song ‘Mad World’, which they recorded for the soundtrack to the otherworldly 2001 film Donnie Darko and released as a single in 2003, when it reached number one in the UK singles chart. Hopelessly depressive verses – replete with lines such as ‘Hide my head I want to drown my sorrow / No tomorrow, no tomorrow’ and ‘Going nowhere, going nowhere’ – wash over the commercial in plaintive croons, transforming over-the-shoulder, shoot-’em-up aesthetics into a dissonant essay in melancholia. Detached and dispassionate, this affectless warrior is not a selfless hero sacrificing himself for the greater good, but a hollowed-out soldier indifferent to his own life; as the refrain laments: ‘The dreams in which I’m dyin’ / Are the best I’ve ever had.’ We learn from Sigmund Freud that the melancholic disposition is defined by severe self-reproachment. Significantly, however, the melancholic’s feelings of worthlessness originate not from within, but from the feeling that the object of their deepest love or reverence has fallen from grace. For Freud, the self-abandonment characteristic of the melancholic is really the ego’s identification with a formerly revered but now debased love object. For the soldier, then, melancholy is not the result of a heightened sensitivity to violence or a rejection of war as a concept, but is, rather, a reaction to the loss of the ideal of war as a righteous and purposeful activity bolstered by patriotic rhetoric and moral rectitude. To use this model of melancholia to sell a gaming product to men with an average age of 30 may seem counter to the fundamentals of marketing, but the strategy is not without carefully considered period logic. Gears of War depends on a conventional anti-hero/redemption narrative set in another world where it is up to a motley band of once-disgraced brigands to save what remains of humanity from a subterranean enemy known as the Locust Horde. Its formidable commercial success aside, the game is simply a well-executed shoot-’em-up that offers no significant expansion on that well-worn genre. Its television advertisement is of far greater interest: the emphasis on the melancholy, pathos and self-reproach communicated by ‘Mad World’ connects Gears of War to a contemporary understanding of war produced in large part as a response to the ongoing conflicts in Iraq and Afghanistan. The conundrum for the producers of war-based video games is a delicate one: how to craft and market a war game in an era when public opinion has turned against war as a paradigm? How, for instance, is heroism rendered in a fictional narrative when the most obvious contemporary social referents – the conflicts in Iraq and Afghanistan – do not, as social histories in the making, embody the kind of unambiguous moral bases easily identified, for example, in World Wars I and II? How can our period eye, in all its ambivalence, be satisfied while still offering a compelling narrative of heroism? Those responsible for the advertisement of the juggernaut franchise that is Gears of War obviously concluded that to acknowledge the public’s ambivalence was key to eradicating it as an obstacle to the game’s commercial success. While the game’s story is not a romanticized one, the commercial relies on age-old Romantic notions of self. This is, of course, a rather insidious strategy. Watching Marcus Fenix, the principal character in Gears of War, is like watching post-traumatic stress disorder in progress. This damaged, melancholic subject whose most fulfilling fantasies hinge on his own demise, is the very same consciousness the gamer is being invited to inhabit. Here the exhausted tropes of bravery, patriotism, honour and selflessness have been replaced by a sheer lack of self. While the commercial knowingly flirts with a critique of war and its ill effects, this critique is but a nod to social mores, just enough to satisfy our collective ambivalence and sell the game. The conflicted loner may display a softer side than the straightforward jingoistic patriot, but his actions remain fundamentally analogous. There is no joy in killing, but the killing goes on. No finger-pointing here, just a craftily rendered endorsement by other means.

Like all good wars, Gears of War has a sequel. In the commercial for Gears of War 2, which was released in late 2008, ‘Mad World’ is replaced by DeVotchKa’s maudlin 2004 electro-ballad ‘How it Ends’. This time, we see Fenix seated beneath a tree contemplating a poppy, his square jaw set in a handsome grimace awaiting the inevitable conflict, the melancholy palpable and the gears of war set to turn again. Rumour has it that Gears of War 3, scheduled for a 2010 release, will star a female protagonist named Alex, and while no further details have been leaked to date, the addition of a woman to Gears of War’s all-male cast is characteristically topical, inflammatory and opportunistic, and will doubtless prove profitable. What music will be used to promote the game remains to be seen.