There are a few scenes in Richard Mosse’s new video installation, Incoming (2017), where you can see photo-journalists or news camerapeople chasing down the unfolding action or holding their lenses steady to catch the decisive moment. Mosse, on the other hand, spent two years filming the same events with a camera that was too large to hold, had no aperture to see through and was difficult to focus. Designed by a weapons manufacturer, the thermal camera Mosse used to document the migrant crisis for Incoming is built to capture heat signatures – in black, white and shades of grey. It weighs 23 kilogrammes, and is meant to be operated remotely by a laptop. As Mosse puts it: ‘The camera is designed to stand on a sentry pole in the middle of the desert,’ detecting a human body’s heat from up to 30 kilometres away for surveillance or targeting. Together with his cameraman, Trevor Tweeten, and the camera’s original designer, Mosse adapted an Xbox controller to operate it and an old Steadicam mechanism as support. As an apparatus designed for surveillance, the thermal camera represents part of the spectrum the human eye cannot see and, as such, is an apt metaphor for the vast and ungraspable refugee crisis – the lives that ‘register’ but are not ‘seen’.

The 52 minutes of footage that comprise Incoming, slowed down from the camera’s 60 frames per second to 24 frames per second, is by turns lyrical and vivid, harrowing and violent. The action unfolds across three large screens – from one screen at a time to two, then all three simul-taneously. Much like his previous endeavour, The Enclave (2013), which Mosse filmed in the eastern Congo with outdated infrared film, originally designed for military use, the photographic technology presents inherent challenges and unintentional aesthetic call backs. In The Enclave, the infrared film responded to chlorophyll in plants to make the jungle’s green foliage look bright pink. In Incoming, the thermal camera also works an extra-sensory tool to perceive thermal radiation, rendering it black on white or white on black. It allowed Mosse and his team to detect missiles landing in Aleppo from the other side of the Turkish border, ships sinking in the Aegean Sea miles offshore, and gunmen and refugees being smuggled at night. The otherworldly footage evokes the sense that we are watching the action covertly, as if through night-vision goggles; it’s a rare glimpse through the mechanized tools of surveillance used by states and militaries to view us. When we do see close-ups of faces, noses appear like indistinct white blobs and eyes are dark pits. Humans become fleshy targets susceptible to the camera’s weaponized gaze. It’s a representational device that draws powerful parallels between the act of documentation and surveillance.

Since the camera can’t render details in colour or overviews of landscape, the footage in Incoming doesn’t fully reveal the range of geographic locations in which Mosse filmed. The artist, along with Tweeten and the film’s soundtrack composer, Ben Frost, tracked two major flows of human migration. The first – in which refugees flee from the war-torn regions of Syria and the Middle East, through Turkey, across the Aegean Sea to Greece and, from there, into the rest of Europe – ends at an emergency shelter in the former Tempelhof Airport in Berlin. The second follows African migrants escaping wars and the effects of climate change, crossing the Sahara Desert under threat of Al-Qaeda in the Maghreb to Libya, then on to Sicily and, eventually, to the infamous Jungle camp in Calais, France. Frost’s soundtrack goes a long way towards grounding some of those locations, capturing the voices of doctors trying to resuscitate drowning victims on the coast of Lesbos, the echoes of children’s screams, the bouncing of ping-pong balls in temporary shelters, the deafening jet engines on the deck of the USS Theodore Roosevelt aircraft carrier and the rotor blades of rescue helicopters.

The deliberately attenuated pace of the footage and the camera’s constant, eerily slow scanning of its subject, lend sequences of both peace and turmoil an equivalent sense of dramatic tension. Drifting airborne kites or reflections on the sea are as vivid as two boys wrestling or water being wrung from a soaked garment. It’s like watching a slowly moving black and white photograph, bringing to mind photojournalist James Nachtwey’s wrought, high-contrast photographs of war and famine, which extract an unexpected beauty from horror. In Incoming, scenes that might be too intensely visceral to confront in full colour become unfamiliar. In one long sequence, we see close-ups of body bags being shoved into cold steel lockers at a morgue, where pathologists on the island of Rhodes perform DNA testing to help identify those who have drowned at sea. Wearing respirators and protective plastic eye shields, they unzip a body bag and expose the skull of an 11-year-old girl. Using sharp metallic tools, they cut through a white substance that can barely be recognized as flesh: the blood that escapes is not red but black. With a small saw, the pathologist removes a segment of bone, which looks like a glowing plastic rod, making the sight newly horrific. For another harrowing scene, Mosse filmed the attempts of rescue workers to resuscitate the drowned when a boat overloaded with refugees sank five kilometres off the coast of Lesbos. The camera renderstheir warm handprints on the victims’ cold flesh. ‘It was like a scene from hell,’ Mosse told me. ‘You could literally read the hypothermia through the camera: they weren’t glowing black; they were white.’ 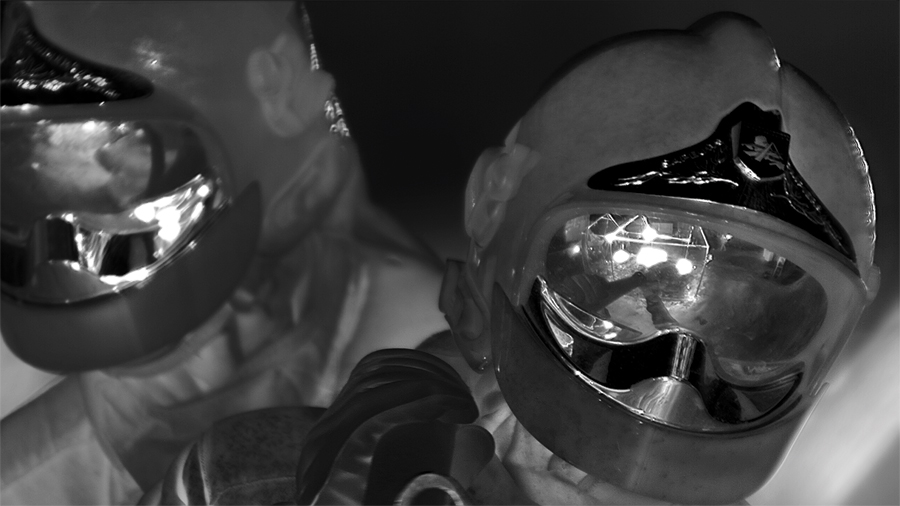 One of the unexpected threads that runs through Incoming, more than the difference between cool and warm or black and white, is the way the thermal camera highlights the high-tech filters and protective gear that separate those who are shielded from the elements versus those exposed to them – those ‘helping’ from those ‘in need of help’.Rescue workers billow in papery white hazmat suits as they lift bare-skinned refugees from the water; the Navy crew of the USS Roosevelt don goggles and breathing apparatuses to protect them from the white-hot engines of departing jets; coroners wear respirators and latex gloves to mask the smell of rotting bodies; firefighters on the scene of the Jungle refugee camp, as it is razed by flames, have reflective masks and fireproof uniforms. When compared to the inadequately covered bodies of refugees in life rafts, or the wispy fabric that migrants in a truck convoy struggle to use to protect their faces from dusty roads, or their few garments hung out to dry at shelters, it’s a reminder of the physical barriers between those with shelter and those without it. Incoming documents a contemporary Odyssey of humans displaced from their homes. Mosse effectively repurposes thermal technology, ordinarily reserved for states and the military, to expose the susceptibility and vulnerability of the human body, and the rights we take for granted as inalienably assigned to it, when those bodies become stateless.

Richard Mosse is an Irish artist based in New York, USA. Incoming is on view at The Curve, Barbican Centre, London, UK, until 15 April. Later this year, it will travel to National Gallery of Victoria, Melbourne, Australia. The accompanying artist’s book is published by MACK, with a catalogue published by Barbican Ridinghouse. A complementary photographic series, ‘Heat Maps’, is currently on view at Jack Shainman Gallery, New York, and will be shown as part of the Prix Pictet exhibition at the Victoria and Albert Museum, London, from 6 to 28 May.