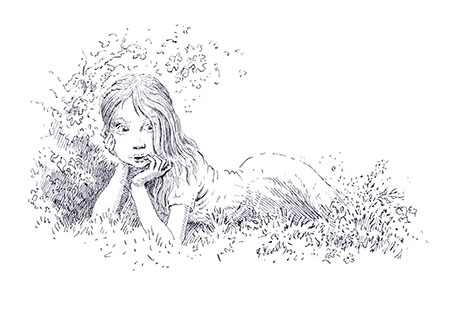 On the first page of the new Bloomsbury edition of Alice’s Adventures in Wonderland, Mervyn Peake’s Alice lies in the grass beneath the opening sentence, hair falling into her face, holding her head, tapping her lip with her little finger – her impatience and candour captured in the sketchy lines. As the narrator chivalrously defers to the inquisitive voice of the optimistic little girl, the reader turns the page into the extraordinary story. It’s a significant gesture, and something like the conjuring trick performed in the narratives of Carroll’s two stories, where the familiar becomes not strange but more interesting. Wonderland inverted in the Looking-Glass reminds me of being asked to draw with my non-writing hand: because you can’t control the line so well you work harder to make accurate marks, and to make accurate marks you have to look harder.

Lewis Carroll’s writing was flanked by two further pursuits of accuracy: mathematics and photography. His words allow the theoretical reality of mathematics and those elements of luck and timing that grace photo­graphy to intertwine. The result is a world where space and time are famously unsteady. Peake’s illustrations have a similar quality – the variations in his characters draw you into each picture, whether a deft caricature or full-page tableau. Peake also worked with words (the Gormenghast trilogy, 1946–59), and it is a pleasure to see how a writer, who memorably propelled a woman in a ‘typhoon of black silk’, drew the March Hare and the Mad Hatter. As well as the images, the introductions by Will Self and Zadie Smith to the new editions are additional affirmations of those puzzles and phantasmagorias of Carroll’s creations. These books are proof of the pictures and conversation that can be generated by the texts – every aspect of them shows a delight in chaos contained.