Tintin and the art world 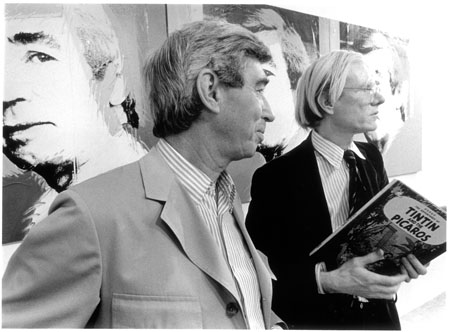 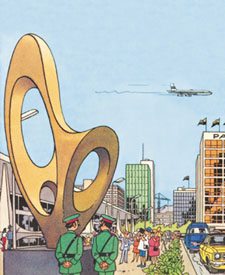 A gallery in Brussels in the mid-1970s. Hergé, the creator of Tintin, stands next to Andy Warhol; behind them are Warhol’s portraits of Hergé (a phonetic reversal of the initials of his real name, George Remi). It was not the first time the two had met. Hergé had visited The Factory in 1972 and to Warhol he was an icon: ‘Hergé influenced me as much as Disney.’ For Hergé, the American comic strip was the basis of the bande dessinée, which he introduced to Europe (although the speech bubble picture strip originated in Chinese art).

Hergé was a chronicler of the 20th century. Tintin, Snowy and the rest of the characters remain ageless, but in each album the world changes. The backgrounds and scenarios of his stories are intensely topical, and this was something Hergé and Warhol had in common.

Hergé also collected Modern art. His tastes changed as he grew older, moving from Abstract Expressionists such as Georges Mathieu and Karel Appel to artists whose linear qualities were closer to his own. At the time this photograph was taken, a suite of Lichtenstein prints hung in his office. It was in the art world that Hergé was planning to set his next Tintin adventure, Tintin et
Alph-Art, left unfinished when he died on 3 March 1983.

In this final story Captain Haddock dashes into an art gallery to avoid Madame Castafiore. Inside, all the art works are simply letters. There is of course an ‘H’. Haddock buys it and the adventure begins. In one sketch a shocked Tintin holds the ‘H’ at arm’s length. It is as if he is looking in surprise at the symbol of his other self (Hergé once said ‘I am Tintin’), but Tintin, unlike his creator,
is immortal. Tintin et Alph-Art is a story of forgery and in the final frame Tintin is led off by the forgers to his doom: he is to be encapsulated in a fake César, an Expansion of liquid polyester to be entitled Reporter. So it would seem that Tintin, like Hergé, is to become a work of art, albeit a fake. That is, if Snowy doesn’t come to the rescue.