The amateur photographs of Takeshi Shimajiri 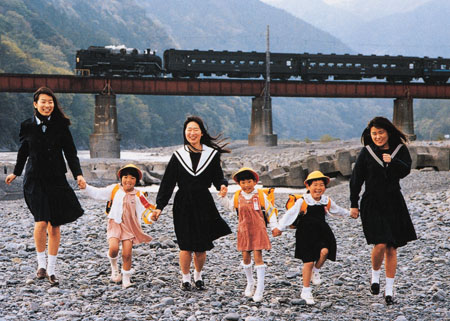 I first saw Takeshi Shimajiri’s amateur photographs in a bookshop in the late 1990s. I was very impressed by his self-published book Roman Kikou: Kisha to Otome-tachi (Romantic Journeys: Steam Trains and Virgins, 1998) but I didn’t follow it up at the time. A few years later, I was asked to select photographers working with Japanese subject matter by the American magazine BIG. Although I have never met or spoken to Shimajiri I chose his work.

The reason I like his photographs is that everything in them is anachronistic: steam engines, girls wearing traditional Japanese clothes – even the way the figures are posed is old fashioned. Such characteristic elements were used in advertisements and commercial photography a long time ago, but not any more. There are still some professional photographers who use such imagery, but they do so in a self-conscious way, well knowing that it’s out of fashion. I believe Shimajiri uses these elements unselfconsciously, which results in the unexpected freshness of his photographs. When an amateur takes a picture there can be a purity and richness in the image that a professional could never achieve.

People who deal with images professionally quickly start to think about them metaphorically: the steam engine as a phallic symbol juxtaposed with pretty young maidens. But I don’t believe Shimajiri thinks like this. I imagine that he simply wanted to make something a bit different. I do not know why he decided to add girls in traditional costume. However, girls (along with steam engines) are a popular subject among amateur photo­graphers.

Nowadays professionals are frequently so inclined to conceptualize their images that they lose their sensibility and become hedged in by their own rules. Searching for a special twist to their work, they could never have used these anachronistic elements with the directness found in Shimajiri’s photographs.