In Middlesbrough, to the north-east of England, people are quick to remind me that it’s always been a town of migrants. ‘Everyone here came from somewhere else’, local artist Annie O’Donnell says. At the turn of the 19th century, Middlesbrough was still a farming community of 25 inhabitants. From the 1830s, coal and iron ore were discovered, which became the lifeblood of the town – by the mid 20th century it held 165,000 people. But as the docks for iron and coal export closed in 1980, the population dwindled, and the familiar arc of meteoric rise and postwar decline was completed.

This great abdication has made Middlesbrough one of the most deprived places in the country, variously described as part of ‘Britain’s rust belt’ (The Economist) or one of the UK’s ‘least resilient’ locations (credit reference agency Experian). In this microcosm for the disenfranchisement of ‘Late Great Britain’, with no decent effort to rebuild the community here, set alongside public sector cuts and increasing immigration, you can see how the latter became an easy target for discontent. If the vote last year for the UK to leave the EU felt like the end of an era (Middlesbrough, like the North East in general, voted overwhelmingly in favour of Brexit), then another era had already come to an end for Middlesbrough the year before when the steelworks closed.

This history takes on a haunting patina the moment you board the twin-carriage train from Darlington which takes you through old industrial towns lining the River Tees into Middlesbrough. Housed within the railway station’s former parcel store is Platform-A, a gallery and set of studios. Director Tony Charles, a former steelworker, produces ‘unpaintings’: aluminium planks daubed in the primary colours of industrial signage, degraded with an angle grinder and sealed up in resin – manufactural gestures transformed into painted motion. Meanwhile photographs taken by Jan Williams and Chris Teasdale, are wheat-pasted across the station underpass, documenting the architecture of the Middlesbrough Transporter Bridge, looming like a strange, blue UFO over nondescript suburban housing.

As I looped back through the red-brick gridded streets into the riverside wasteland of Middlehaven, I thought of something O’Donnell had told me earlier, that the freaky architecture to Teesside reflects a strange mix of scale and fragility. You can sense this in the alien structures that line the landscape; consider the tension captured within the steel wire framing of Anish Kapoor’s Temenos (2010), and alongside it, the Transporter itself, built in 1911, which branches across the river Tees at 69 metres high: both are monumental, but also pierced, fragile. There’s an infusion of weirdness too in the town’s lively collection of art spaces, with local artist Bobby Benjamin hosting pop-up shows in a former brothel on top of the infamous Club Bongo International, to the deeply incongruous Python Gallery, which holds temporary exhibitions on a leftover floor in a bland office building (director Peter Heselton proudly describes it to me as the absolute antithesis of a white cube).

The town’s flagship cultural institution is the Middlesbrough Institute for Modern Art (mima). With a building designed by Erick van Egeraat, dominated by a long staircase that carves continuously upwards, visible through giant glass panels, it was generally regarded as a spaceship on its arrival in 2007. Its programme used to range from patrician attempts to convert inhabitants to the cause of high art, with exhibitions by the likes of Gerhard Richter and Louise Bourgeois, through to the crass populism of an automotive art show curated by the cast of television programme Top Gear.

Director Alistair Hudson has pushed for a new direction since he came into the role in 2014, explicitly reaching back to the ideas of John Ruskin (the walls outside his office are lined with the words of the Victorian artist and reformer: ‘art … must never exist alone, never for itself’). Hudson is a key figure in artist Tania Bruguera’s Arte Útil movement which advocates for art as a tool for social benefit rather than market-driven force. Here he is attempting to apply that as an institutional methodology, ‘to decolonize and repurpose the museum,’ he tells me. Could mima be remade as a proper manifestation of its community?

Hudson’s first show at mima, ‘Localism’ (2015–16) was a provocation to the international blockbuster show, to ‘rescue the ideology of art from itself’. The exhibition traced the history of art in Middlesbrough from the 1830s to the present day, with its narrative effectively crowd-sourced from the local community: the gallery space as a public forum. Meanwhile, artist-in-residence Emily Hesse initiated her New Linthorpe project by revisiting the history of the 19th-century Linthorpe Art Pottery, which began life in Middlesbrough as a response to increasing unemployment and experimental platform for local clay in high-end ceramics. Hesse’s project incorporated a collective-use kiln and classes for people across the town to teach them hand-building techniques, using clay dug from the same seam as the earlier Linthorpe enterprise.

More recently, ‘If all relations were to reach equilibrium, this building would dissolve’ (2016) was designed as a response to toxic migration debates, and the ‘red door crisis’ in Middlesbrough, in which doors for refugee housing had been painted in an identifiable red, opening up the inhabitants to xenophobic abuse. Hudson worked with a local migrants’ rights charity Investing in People and Culture to tell deeper stories about the experience of seeking asylum, and included a food bank, free internet access and ‘community days’ in the show. As a consequence, the museum now hosts weekly lunches and days of gardening, language and craft workshops, as part of a shift away from the spectatorship and momentary experience of the gallery – ‘reversing the polarities of the institution’, Hudson says – towards its public programme.

Currently on show is ‘Wilderness Way’, a decade-long survey of the Margaret Thatcher era from 1977 to 1987. At its heart is the iconic image of Thatcher’s ‘Walk in the Wilderness’, a 1984 photograph which captured the prime minister striding across the wasteland of former steel foundry Head Wrightson with an air of reflective efficiency. ‘I do think the ’80s created our current crisis, of migration policy, of turbo-charged capitalism’ Hudson says. ‘Wilderness Way’ ranges from the interrogation of living memory in Jeremy Deller’s The Battle of Orgreave (An Injury to One is an Injury to All) (2011), video documentation of a 2001 reenactment of the 1984 dismantling of picket lines outside Orgreave Coking Plant in South Yorkshire when police charged crowds of striking miners on horseback, to Conrad Atkinson’s affecting piece No Compensation (1977), narrating west Cumbrian miners’ struggle for justice through photographs, official documentation and fragments of iron ore.

Stuart Hall most clearly demonstrated how a racialized political discourse found a new form from the 1980s, bound up in Thatcherite authoritarian populism, a mode of politics which he termed ‘regressive modernization’. That’s the thread that bleeds into ‘The Place is Here’, an exhibition currently shared between mima and South London Gallery that travelled from Nottingham Contemporary, surveying the work of British black artists through the 1980s. There’s Eddie Chambers’ first known work, the Destruction of the National Front (1979–80) in which the Union Jack is collaged as a swastika, and then sequentially torn into fragments, as well as Chila Kumari Burman’s Convenience, Not Love (1985) in which Thatcher is rendered as John Bull, a speech-bubble referencing her infamous 1978 speech which stoked fears of being ‘swamped by people with a different culture’.

How can shattered communities be healed? If this season’s exhibitions at mima tell us how we got into this mess, then blueprints pinned around the museum’s office walls sketch out the next phase of Hudson’s mission to de-centre the institution away from the gallery. Rather than ‘culture supporting regeneration in a ‘soft’ way’, Hudson says, ‘we are actively trying to influence urban planning’. This time mima is working on the New Middlesbrough Settlement project to produce a new master plan for the town’s Gresham neighbourhood, the focal point of controversial regeneration work over the last decade. When I walk through the area later, it’s clear that the on-and-off demolition works have scarred the landscape (in 2005 the former mayor declared the area a ‘cancer’ to be cut out of the town).

While the current plan proposes a whole demolished slice of the district be turned over to a student village and private housing development, mima proposes ‘alternative strategies for regeneration’, working on a parallel master-plan with residents, housing activists, and local asylum seeker charity Investing in People and Culture, which includes new-build co-housing, an eco-village, communal dining, and an urban farm. Alongside that, artist Isabel Lima has been leading ‘Gresham’s Wooden Horse’, in which locals build a Trojan-horse monument, learning new craft skills as they go, and coming together in an act of creative solidarity. Hudson hopes to draw on all of this work for a radical version of an ‘ideal home show’, launching at mima in October.

It’s easy to have an innate suspicion of Hudson’s deployment of a right-on politics, where art is decoupled from its embrace of uselessness and subjected to a transactional language, surely the ultimate submission to a neoliberal ‘common sense’ (I have a particular allergy to Hudson’s vision of a ‘Museum 3.0’). But there’s a powerful rejection of how the art world, too often, reduces activism to radical cosplay. This is an era in which political culture is being reformed in ways that may well be far more dramatic than what happened in the 1980s, and that’s the context in which mima proposes an articulation, rather than imposition, of a democratic cosmopolitanism, charting a progressive path out of here.

An overdue retrospective at Tate Modern, London, focuses on the artist’s preoccupation with theatre but fails to enliven her previous triumphs 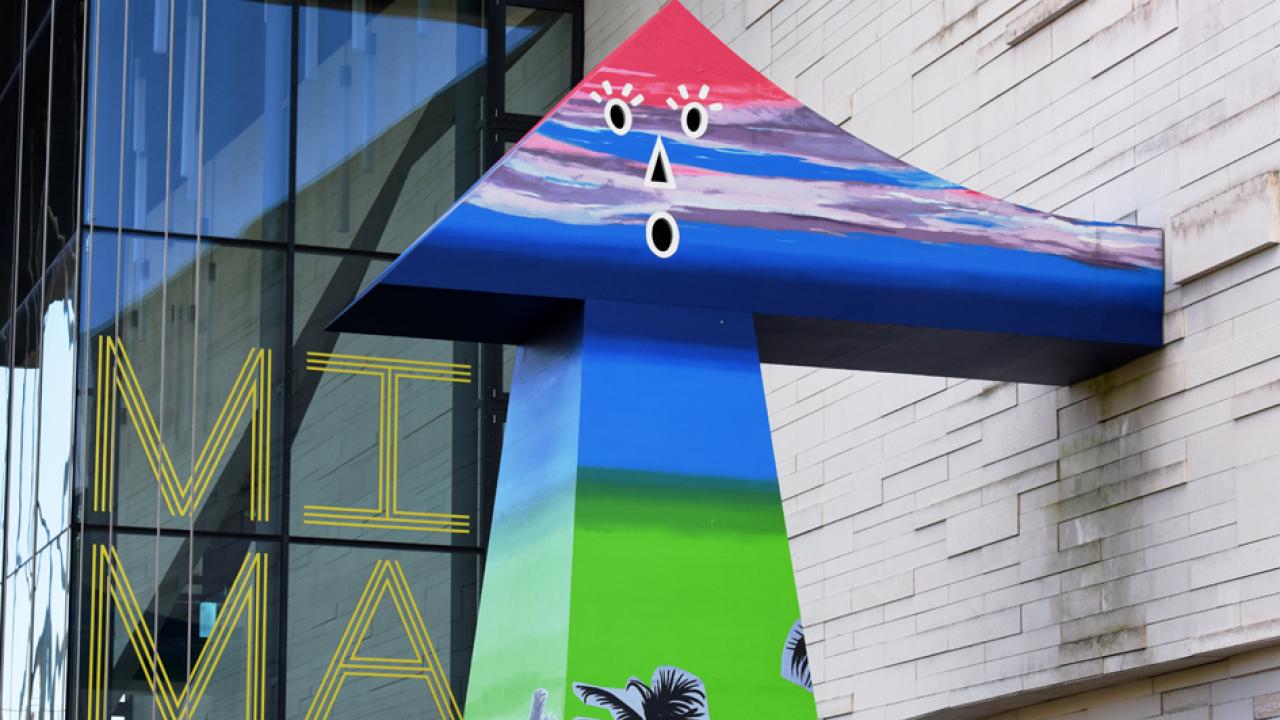 Opinion
Is This the Future of the Art School?