What would it be like to live in such a city? I ask myself as I’m standing in central Riga in front of the Freedom Monument and my Latvian guide tells me its story. Funded by donations from the Latvian people, the 42-metre-high monument was erected during the 1930s on Freedom Boulevard (Brívíbas bulváris) to commemorate the country’s liberation from Russian rule in 1918, at the end of the 1st World War. When Riga was reoccupied by the Red Army following the Hitler-Stalin Pact of 1940, the monument was set to be destroyed. This was prevented by the Latvian sculptor Vera Ignatyevna Mukhina who was popular in the Soviet Union at the time (her gigantic Worker and Kolkhoz Woman was first shown at the 1937 International Exhibition in Paris and again in Moscow, where it still stands today) and who had studied with Kárlis Zále, the sculptor responsible for the Riga monument. Instead Latvia’s Statue of Liberty was recast as Mother Russia, and the street was renamed Lenin Boulevard. In 1941, the German army arrived and the boulevard was renamed again, after Adolf Hitler. At the end of WWII, the Soviets returned and the street signs now bore the name of Josef Stalin. Since Latvia’s declaration of independence in 1990, it has gone back to being called Freedom Boulevard, and the statue is once more an embodiment of liberty.

Anyone who had lived through all these shifts, I though to myself, would have every reason to view history as something that comes over you like an infectious disease and against which little can be done. Not so the people I met in Riga: open-minded, purposeful, well-informed, communicative and, to us jaded westerners, almost enviable in their eagerness to make the most of their regained freedom. In this, they may be reconnecting with earlier times: as part of the Hanseatic League, Riga was closely connected with German and Scandinavian seaports, a period of history still reflected today in the city’s large Gothic churches and townhouses.

In 1710 Latvia was occupied by Russian troops and from then on it was part of the Russian Empire. Around 1900, Riga was the fifth largest city in the Empire after Moscow, St. Petersburg, Warsaw and Kiev, and as the Empire’s most important port it experienced a breathtaking economic boom. Entire neighbourhoods with huge, richly ornamented Art Nouveau houses were built in a very short time. One German-Latvian architect who built whole streets was Mikhail Osipovich Eisenstein, father of the famous Soviet film director Sergei Mikhailovich Eisenstein. One of these grand residences (that now bears a memorial plaque) is where Eisenstein spent a sheltered childhood before setting off to St. Petersburg to study.

Another little known fact is that Richard Wagner, fleeing his creditors, lived in Riga from 1837 to 1839. Comments by the composer suggest that he did not like the city – perhaps in part because new debts meant he soon had to leave again. A plaque on the concert hall where he conducted a concert recalls this episode that was disagreeable for both sides.

As mentioned, however, the city’s links with Germany go beyond this one encounter with Wagner. So in mid June, when a major exhibition of German art since 1960 opened at the Arsenal building, part of the Latvian National Museum of Art, under the title ‘Elective Affinities’, it was seen as an important event. The title is taken from Goethe’s novel of the same name and this show, curated by Mark Gisbourne, with works by 53 artists (including Andreas Gursky, Anselm Kiefer, Neo Rauch and Gerhard Richter), conveyed, it has to be said, a rather romantic image of German art that feels largely obsolete. In contrast, the museum’s perfectly restored main building looked positively fresh. It houses a permanent show of Latvian art since 1945 which proves that the country’s artists were already familiar with western art movements during the Soviet era. One example is Above the River Daugava (1960), a picture by Gunárs Mitrevics (1922–2007) that combines the style of Socialist Realism with abstract painting. Until July, under the title ‘Illusion as Reality’, the museum also hosted a retrospective of the renowned Latvian artist Mirvaldis Polis (born 1948); the radical eclecticism of his photorealist painting could be seen as a parallel to the renaming escapades of Freedom Boulevard.

The director of the planned Latvian Museum of Contemporary Art, Kaspars Vanags, who lived in Berlin for several years, proudly showed me the winner of the architecture competition for this new institution. Those invited to submit designs included prestigious firms including London’s Caruso St John and Germany’s Sauerbruch Hutton. The condition was that each entrant had to collaborate with a Latvian architect. A similarly prestigious jury chose the entry by David Adjaye’s office Adjaye Associates with the Latvian group AB3D, a design inspired by traditional Latvian wooden architecture. The museum is scheduled to open in 2021, with funding already secured from the Boris and Ināra Teterev Foundation and the ABLV Charitable Foundation.

The museum plans to focus on Baltic art since 1960, Vanags said, prompting me to ask about the situation concerning commercial galleries and collectors of contemporary art. The museum will bridge the gap left by the current lack of collectors, he told me, and on the subject of galleries he immediately named Temmikova & Kasela, which, although based in the Estonian capital Tallinn, also represents Latvian artists including the painter Inga Meldere. For Riga, he named MÀKSLA XO; at a prominent location near the National Museum, this gallery shows young international artists. When I visited, there was a solo show by the French painter Michel Castaignet.

With a vibrant cultural life and a perfectly renovated old town, Riga presents itself as a confident, cosmopolitan city. But anyone visiting the Museum of Occupation that documents the period of Soviet rule (thousands of Latvians were executed, tens of thousands deported to Siberia) gets an idea of the hurt that had to be overcome by the city’s inhabitants in order to arrive at an astoundingly easy-going open-mindedness. 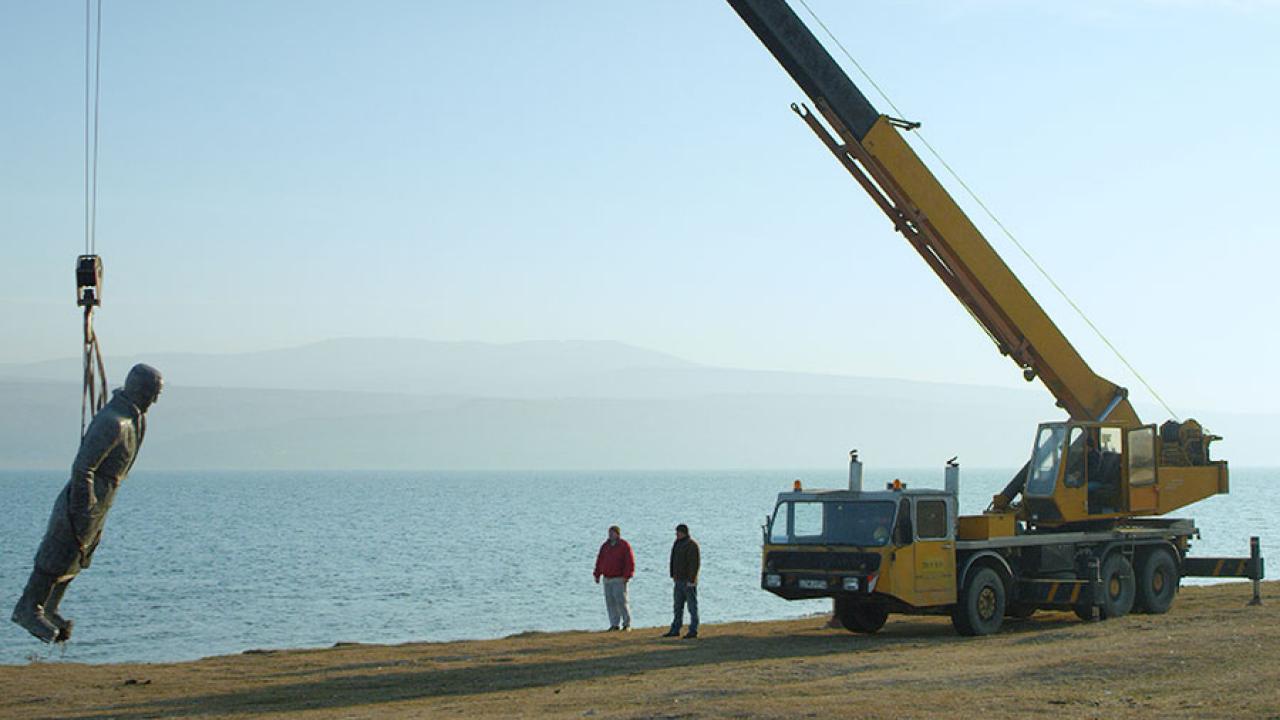 The artist explores the influence of myths and tales on present-day Georgia at Bundeskunsthalle, Bonn