The Rise of the London Art Market 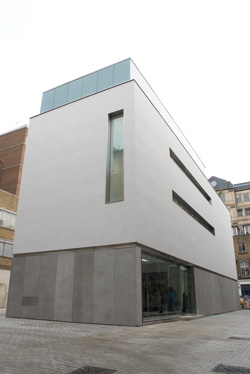 There are two ways a conference could approach such a subject. The first might be to trace the London art market’s vertiginous peaks and plummeting troughs from its inauguration in the 1870s onwards. The second could be to focus excitedly and nervously on its extraordinary evolution, since the last crash, into the marvellously resurgent model of today. This two-day smorgasbord of talks and round tables went for both options.

By the end of the first day, which moved onwards and upwards from a keynote address by art historian Hans Van Miegroet – virtually body-popping on the podium as he extolled micro- and macroeconomic approaches to art history, the importance of measuring market transparency and the usefulness of logarithmic normalizations of lot prices in 18th-century Amsterdam – the timeline had reached New British Sculpture, the moment the market last crashed. On the way, though, we had travelled far. We had had a whirlwind antique-maps-in-Powerpoint tour of how 19th-century London galleries clustered like suckerfish around whales (the National Gallery, the Royal Academy) – plus ça change... We’d heard how, at the turn of the century, luxuriously appointed spaces such as the Fine Art Society ceded precedence to dimly lit grottoes that focused on contemporary British artists. The establishment of bohemian Chelsea opened onto Bloomsbury, the consequential importation of continental Modernism, and the first seismic collapse of the London market with the introduction of conscription during World War I. (Fewer than ten percent of the art works exhibited in 1923 were sold; galleries were converted into cinemas and jazz clubs.)

Trainspotter-friendly details abounded. Did you know Peggy Guggenheim had a Cork Street gallery in the 1930s that showed Lucian Freud’s teenage drawings? That the ridged-linoleum Pirelli flooring Paul Kasmin installed in his 1960s’ Mayfair gallery (‘the London outpost for Clem’s boys’, as art historian Lisa Tickner noted) was copied from Rome Airport and was a nightmare to clean? That Herbert Read didn’t like Francis Bacon and had to be forced by Douglas Cooper to give him his career-establishing exposure – juxtaposing him with Pablo Picasso – in his book Art Now (1933)? You do now.

Nevertheless, there was a feeling of disconnect and dutiful attention in the hall. Judging from how the present kept intruding on past events in audience questions, many delegates were itching for the contemporary-era talks (indeed, a substantially less tweedy audience arrived on the second day). Since the conference coincided with Peter Doig’s record-breaking £5.7 million sale at Sotheby’s, several bugbears unsurprisingly came out quickly, in a panel grouping that included gallerist Sadie Coles and Oliver Barker of Sotheby’s. Dealers dislike auction houses ramping up prices because it leads to boom-and-bust careers (Coles to Barker: ‘Your rule is, if you can sell it, you take it’, though she was quick to credit herself repeatedly with profiteering); and everybody is suspicious, to a xenophobic degree, of foreign money – particularly that of Russians, which must be dodgy, no? For that money may exit the market, like the vanishing Japanese equity that precipitated the last slump.

Georgina Adams, in her assiduous analysis of the contemporary market and the ‘frieze effect’, argued that conditions were different this time. Quietly predicting a longish boom for London, she pointed to the growth of hedge fund assets here, the USA’s tough immigration and litigious regime, and the city’s geographic closeness to emerging markets. Such therapeutic, fact-backed soothsaying was seemingly the main thing people wanted to hear, with self-confessed ‘old lefties’ such as Sacha Craddock mostly getting lost in a shuffle in which ‘the market decides’. (Meanwhile institutions can go hang, because we won’t see those tax breaks or that US-style philanthropic society any time soon.) I’d also point out that we might have heard something from artists, none of whom was invited to speak. That’s me flapping my gums, though. As curator Ann Gallagher noted damningly in one round table: ‘Art criticism carries on – it’s just a parallel universe.’