Architectural doppelgängers are surprisingly commonplace; after his death Le Corbusier became the most ardently copied architect of the 20th century 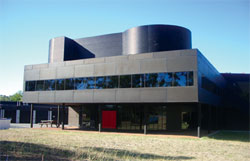 Why would you steal a great work of architecture? Where would you hide it? Who would you hide it from? Such questions are perhaps inappropriate to an object that’s really hard to carry. But architectural theft is more subtle than the grab-and-run techniques used on purses and paintings. Thieves of architecture pilfer ideas, images and shapes. The thing stolen isn’t whisked away in the night, but rather is reconstituted and rebuilt as an orphan in a new locale, with approvals from building departments and clients at whose request the building is erected. Theft itself is reconsidered, becoming a hushed quotation, unadvertised reference and reflection.

Popularity and influence result from the conflation of exposure, rarity and desire. Playing hard to get but still relatively accessible to visitation, some works of architecture breed a palpable longing and almost guarantee imitation. By strategically controlling and carefully deploying images of his work, Le Corbusier became one of the most ardently copied architects of the 20th century. Most such reproductions took place after his death in 1965, in sites spanning the globe. Discreetly tucked away in New York’s Harlem, the Church of the Crucifixion, designed by Costas Machlouzarides, was completed in 1966; the Cemetery Chapel in Mukhagdverdi, Georgia, was designed by Victor Djorbenadze and built during the Brezhnev era; St Peter’s Church and Seminary in Cardross, Scotland, by Gillespie, Kidd and Coia (GKC), was completed in 1966; and the Institute of Aboriginal and Torres Strait Islander Studies, Canberra, Australia, designed by Ashton, Raggatt and McDougall (ARM), was built in 2001.

Teetering between humility and humiliation, these doppelgängers both project their admiration and acknowledge their inability to be unique. The similarity of these structures to Le Corbusier’s originals goes beyond mere inspiration. If one knows the iconic forms of the Chapel of Notre Dame du Haut in Ronchamp, France, then the Church of the Crucifixion (lost in the dense fabric of an American inner-city neighbourhood) and the Mukhagdverdi Chapel (adrift in the foothills of the Caucasus) are immediately identifiable as odd sorts of bastardized twins. They’re just similar enough to their source to read as inexact copies. Each differs in scale, proportion and material but remains a convincing mnemonic, managing to link itself to Le Corbusier through the filter of memory. In one’s mind these buildings are always more similar than they are in reality, recalling images of the chapel at Ronchamp more than the actual building itself. Each seems to represent a singular view of the chapel familiar from period photo documentation. In these images, taken shortly after its construction, the chapel appears startlingly different depending on the angle, a fact emphasized by the clarity and contrast of the black and white photos. Although the building became a pilgrimage site for young architects from around the globe, the photographs, as disseminated through publications such as the definitive eight-volume Le Corbusier: Oeuvre Complète (Editions d’Architecture, Artemis, Zurich, 1967), were the true currency of influence for those who couldn’t make the journey. Even for those who did, the photographs became stand-ins for a more nuanced reality, each image fetishized into privileged and celebrated fragments, penetrating the mind and memory of the admiring viewer as a series of stills rather than a single whole. It is the images that are being lifted, two-dimensional representations resurrected on the sly as three-dimensional structures. Given the difficulty of travelling to France from the USSR in the 1970s, for example, the distorting effect of representation is hardly surprising. One can assume a lot about a building based on a handful of necessarily misleading views of it, and what is remarkable is how incomplete visual information and photographic flatness can result in inhabitable space.

St. Peter’s in Scotland is perhaps the most sly player in the dialogue with the ghosts of Le Corbusier. Built, like the church in Harlem, barely a year after the master’s death and clearly influenced by his Dominican monastery at La Tourette, near Lyon, it has been abandoned since the 1980s. Today it exists as a ruin embedded within an overgrown landscape, parts of it burnt down and derelict. However, its grandiose deterioration increases its aura of historical significance, giving it a patina of archaeological importance that the original on which it is based – restored, maintained, continuously occupied – ironically lacks. Its scale, materiality, massing and organization all recall the ‘other’ monastery, but its desolation plays tricks with the timeline. When constructed, less than a decade after Le Corbusier’s building, St Peter’s was just another contemporary structure emulating his work. But ruins always seem older that they are, and as St Peter’s becomes entrenched in a bracken-choked past, the relationship between progenitor and progeny appears reversed. While no architect wants to see their grandest buildings abandoned in their own lifetime, one wonders whether this is the only way to tip the odds between original and copy.

Five years ago the architectural firm ARM embedded an almost exact duplicate of the Villa Savoye (1929) into one wing of the Institute of Aboriginal and Torres Strait Islander Studies in Canberra. Nearly identical in scale and elevation, it is jet black, in contrast to the brilliant white original. One of the architects, Howard Raggat, wrote that ‘the idea of a black Savoye is an understanding of a local version; a kind of inversion, a reflection, but also a kind of shadow’. Perhaps, like the antipodean tendency for water to go down the drain in reverse, this Villa Savoye has no choice but to be black, like a photographic negative of its source in the Parisian suburbs. Such an inversion may indeed be local: in a museum composed of allusions to foreign architecture, the Villa Savoye becomes a tool for connecting aboriginal culture to that of the imported European establishment. However, the somewhat problematic connotation of representing this cultural relationship via the binary polarization of white and black is nowhere addressed. Within the museum the work of Le Corbusier, along with that of Daniel Libeskind, Eero Saarinen and others, is gathered, like marbles in a bag, and scattered across a new museum programme. ARM do so knowingly and without obfuscation, their ‘appropriations’ reflecting the nature of museums and the cultures that build them. However, while the architects’ website features several vibrant images and a list of awards given for this museum, images of the ersatz Villa Savoye and the rest of the architectural allusions incorporated into the work are nowhere to be found. Such omissions suggest that their role as ‘shadows’ may extend beyond the poetic, forever denying these references either an original source or architectural legitimacy.

What is an architect trying to achieve by rebuilding Ronchamp in Harlem or Georgia, mirroring Villa Savoye in Australia, or duplicating La Tourette in the Scottish Highlands? Each seeks posterity through different means, trying to attain a paradoxical condition of originality and greatness by association through the choice of site. The degree of visibility appears to be proportional to the awareness with which the duplication took place. Although historical sources are scant, only Raggat addresses the implications of choosing to incorporate the Villa Savoye into his firm’s work. His building is the most precise simulacrum and the most publicly exposed. In contrast, the other buildings are unified in their isolation and lack of recognition. The ever-helpful search engines are nearly silent, revealing nothing of these far-flung architectural genealogies, while the Gothamite’s encyclopaedic architecture bible, the AIA Guide to New York City, provides the only available architectural citation for the obscure Church of the Crucifixion, with a terse entry dismissing it as a ‘hallucinogenic version of Ronchamp’, the debt is nowhere else acknowledged. For its urban pastor and parishioners the church’s identity as a copy remains unknown, the umbilical connection
between a neighbourhood of brownstones and tenement buildings and a grassy hillside in eastern France invisible. It seems to be a building without a history, secretly arrived from nowhere.

And yet theft is an inherently exhibitionist act, relying on the object’s display as well as the void left behind after its disappearance. Without exposure theft is merely loss. A plagiarized work that’s unseen might as well not exist. Theft, of ideas or things, relies on the proximity of the seen to the unseen, the known to the unknown, the hidden to the found, and the original to the copy. The stolen goods always engage in a dialogue with their point of origin. Something pilfered, whether exposed and admitted to, intentionally concealed, or misplaced through the abandonment and obscurity of location, achieves posterity in a backhanded devil’s bargain; buying immortality through the recreation of existing ‘ideals’ and the partial replication of what in Modernism is longed for most of all: the grace of originality.

Maria Berman is an architect living and working in New York.