‘To be an honest critic, one must not love.’ – Paul Gauguin

What does painting mean to the public today? One answer can be found in the ‘Paint ’N Pour’ shops (or ‘Wine & Design’, the name varies) that dot the urban landscape. Including, until the pandemic shuttered it, one in my own Brooklyn neighbourhood. The owner, who only wanted to give her first name, Audrey, described herself to me as someone in the insurance business looking to get out. An art lover who enjoyed travelling to France, Audrey felt opening a Wine & Design studio seemed like an ideal way to give back to her neighbourhood. She hired an MFA student from a local art school to be an instructor and offered classes herself: ‘wine therapy’ for the adults and after school programmes for local children. ‘I was known as the art lady,’ she told me, still disappointed that an uncooperative franchise owner failed to help her pivot to online classes during the pandemic. 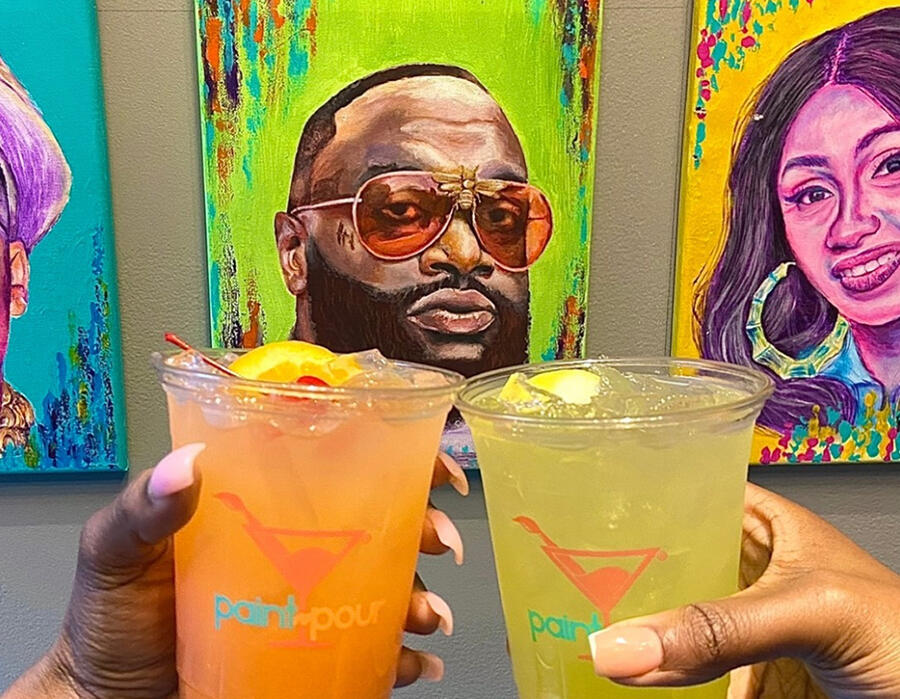 Across the river on Manhattan’s Lower East Side, another Paint ’N Pour is doing booming business on a corner not far from Keith Haring’s legendary Pop Shop. It took me several tries to get in. Spirits (not wine) are the drink of choice for the 20-somethings drawn to this venue. (When I attended a class, the two girlfriends seated across from me said they had heard about the event on TikTok.) Despite the youthful vibe and cocktails with names like ‘Basquiat Iced Tea’, the store’s tag line still pays homage to France: ‘Paint like Picasso. Drink like Van Gogh.’

Drinking while painting is part of the experience economy. It is closer to karaoke, pub quizzes and recreational axe-throwing (this really exists) than a traditional art class. The evening I went, few in the group had ever been before. Angela, our teacher, started the class by asking: ‘Is everybody ready to drink?’ And not: ‘Is everybody ready to paint?’ The forced conviviality of binge drinking (our tickets came with a two-hour open bar) sat awkwardly alongside the ambition to paint like Picasso. Everyone seemed to be a straight couple on a date or small groups of female friends. Nobody seemed to have artistic pretentions. Nevertheless, as usually happens in a painting class, there were several ringers in the room, women in particular, with a sense of colour and technique that immediately stood them apart from the ham-fisted majority. Even though we were all instructed to copy a hideous painting of a generic tropical sunset, these virtuosic amateurs started the session with what the rest of us had to get drunk to achieve (if we ever did): an immediately sensuous connection to their materials. 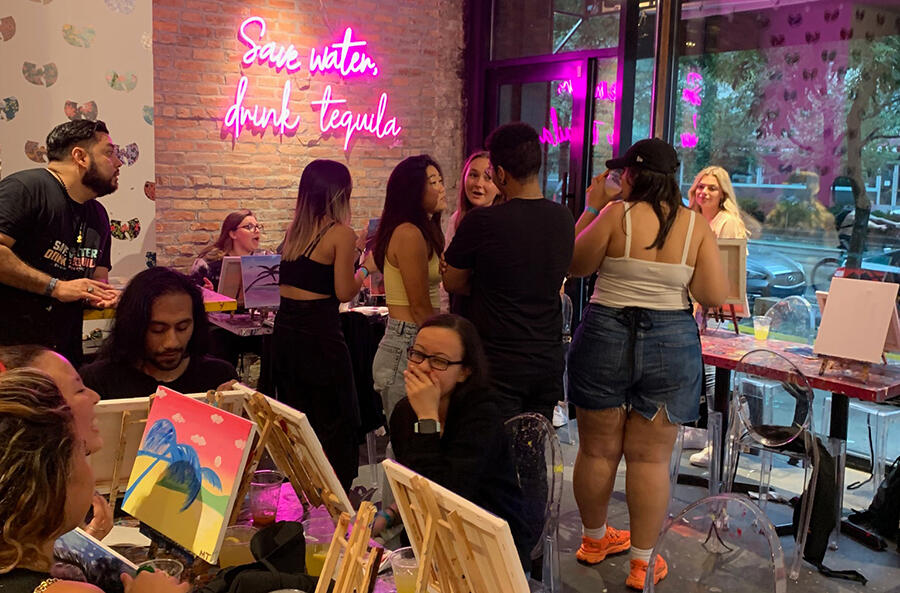 Why am I here?’ I wondered, as I compared myself to my betters, downed my second Basquiat Iced Tea and struggled to find new ways of blaming my paints for the inept landscape I was creating. While I don’t believe a critic must also be adept at the art form they criticize, I do find the fresh waves of humiliation that accompany trying to learn a new skill can have a useful effect on our critical faculties. It reminds us to be kind even to the art we dislike, since we critics are also artists in the end.

Our teachers are also artists. At the Lower East Side store, they have to submit a portfolio just to win the job of guiding drunk birthday parties through simple paintings that would embarrass even the late art instructor Bob Ross. No offense to Ross, whose 1980s television tutorials on painting ‘happy little clouds’ got me through many an anxiety-wracked evening of lockdown. But when Angela reminded us there were no mistakes, only happy accidents, I winced a little. And then I ordered another shot.

What we were doing at Paint N’Pour may seem like it doesn’t belong to the story of painting, but it might. In Paul Gauguin’s Ramblings of a Wannabe Painter (written just before his death in 1903), the artist confessed to preferring H.G. Wells’s obscure A Story of the Stone Age (1897) to the author’s more famous sci-fi The War of the Worlds (1897). The visceral, axe-throwing tale accorded better to Gauguin’s ideal for art, which he wanted to prompt a response more immediate than ‘love’. ‘If a critic wants to accomplish the actual work of criticism,’ he wrote, ‘he needs to be aware of himself most of all, instead of trying to find himself in the work.’ Finding myself as I wrestled with copying that wretched sunset, I think I got a little of what he was driving at. Instead of seeking criteria by which to love or else dismiss a work of art (as his canvases were being alternately embraced or savaged by the Parisian establishment), Gauguin wanted the critic to stay in touch with the creative impulse they bring to the encounter with art in the first place. The ideal response for him is one in which we mistake the work before us as our own. ‘Our emotions before a work of art’, Gauguin claimed, should be like ‘a mother (who) would never find her own child ugly.’ 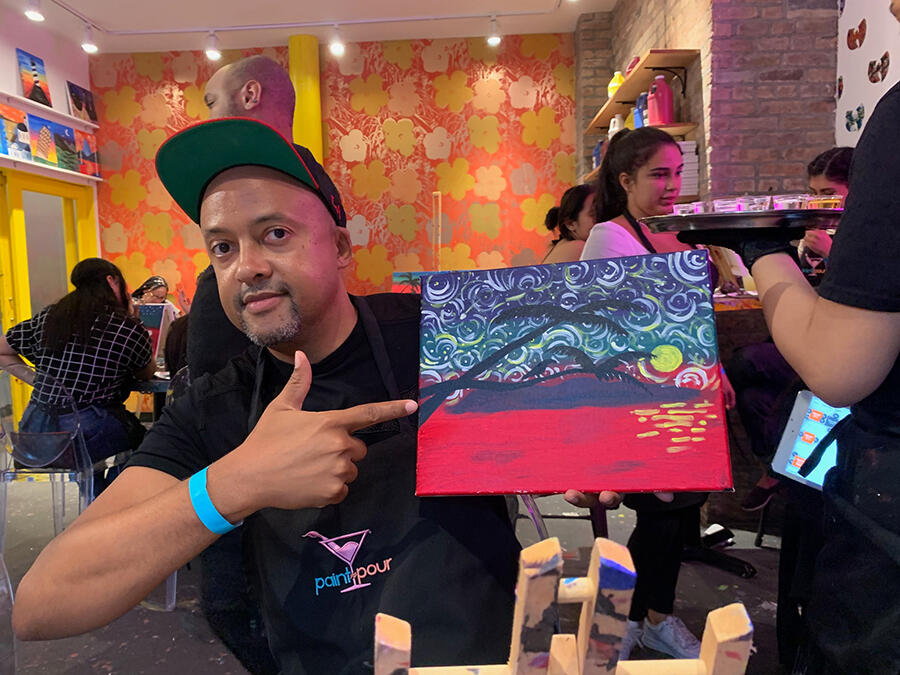 The disinhibiting effects of alcohol do help many of us get to this state. By the end of the two hours, even the model painting we were all copying looked less offensively bad to me. I asked my tablemates to show me their paintings. When I offered a polite comment to one, she laughingly dismissed me: ‘It’s bad … you don’t have to lie.’ And yet, moments later, she was posing for selfies with her canvas, smiling and calling it ‘my baby’. In vino veritas.

This article first appeared in frieze issue 222 with the headline 'Paint and Pour', as part of a special series titled 'Painting Now'.

Tavia Nyong’o is professor of American Studies at Yale University. His book, Afro-Fabulations: The Queer Drama of Black Life, will be published by NYU Press in November 2018.