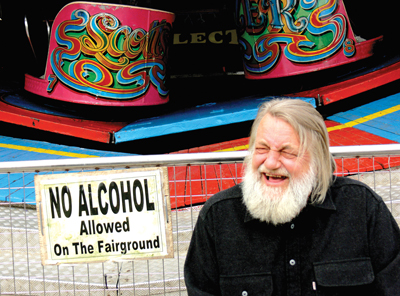 That voice – a fragile tenor, lilting and dancing across archipelagos of consonant and dissonant notes, gliding occasionally to alto highs, diving to baritone depths. Words shaped by an unmistakably English crispness, frayed at the edges by a slight lisping and the trace of an unplaceable regional accent. Its timbre is dusty, as autumnal as golden leaves crackling underfoot, yet for all its world-weariness it still connects with the playful, liberated spring of youth. That voice – possibly one of the most distinctive in popular music of the last 40 years – belongs to Robert Wyatt, who returns this October with Comicopera, his first studio album since 2003’s Cuckooland.

Comicopera is vintage Wyatt. Divided into three ‘acts’ – ‘Lost in Noise’, ‘The Here and The Now’ and ‘Away with the Fairies’ – the distinctly live-sounding album’s 16 tracks bring together the quintessential characteristics of Wyatt’s work. There is the jazz-inflected push-and-pull of plaintive melody and awkward harmony, the unusual arrangements, which put seemingly disparate instruments at ease in each other’s company (for instance, the amiable chat of a steel drum, cornet and saxophone in ‘On the Town Square’), and the lyrics, which, unshackled from the strictures of metre and scansion, effortlessly marry the political with the tender, funny and surreal.

Mournful clarinets open the album, like a passage from a lost Kurt Weill operetta, heralding Wyatt’s version of Anja Garbarek’s ‘Stay Tuned’, in which Wyatt requests we ‘stay tuned/there is more to come/oh don’t start searching/I’ll get back to you’. ‘Just As You Are’ follows; the wry lyrics heavy with experience, it is the closest the album gets to a traditional ballad. Co-written with Wyatt’s wife, Alfreda Benge, and performed as a duet with Monica Vasconcelos, it’s a torch song of sorts, a plea for lovers to accept each other’s idiosyncrasies – in Wyatt’s hands beautifully poised between the unsentimental and the utterly heart-rending.

As Comicopera unfolds through the jazzy atmospherics of ‘You You’, ‘A.W.O.L.’ and the whimsicality of ‘A Beautiful Peace’ (which opens with Wyatt observing items at the side of a road; ‘Oh look, there’s a dead rabbit, all flat … What’s that in the gutter? It’s one of those polystyrene boxes, with chips in … obviously he didn’t want to finish the chips. That’s unusual.’), the mood darkens, the lyrical content becoming more explicitly political. ‘Mob Rule’ describes a government’s duplicitous push towards conflict, while in ‘A Beautiful War’ and ‘Out of the Blue’ (which features Brian Eno’s sampled voice played on a keyboard) Wyatt respectively assumes the narrative roles of bomber plane pilot and his victim. The album’s final act is sung entirely in Italian and Spanish, the reason, according to Wyatt, having ‘to do with feeling completely alienated from Anglo-American culture at that point. Just sort of being silent as an English-speaking person, because of this fucking war.’ Comicopera closes with ‘Hasta Siempre Comandante’ – a Latin rumba that lifts the gloom before evanescing into an ether of noise and sonic texture.

Wyatt’s career began as a drummer with psychedelic pioneers Soft Machine and Matching Mole, before a fall from a third-floor window in 1973 left him paraplegic. The accident marked the beginning of Wyatt’s solo career: a dozen or so incalculably influential albums followed, made in collaboration with such luminaries as Eno, Fred Frith and the late and much-loved Ivor Cutler. If anyone comes close to being a ‘living treasure’ in British music, it’s Wyatt, not least for his down-to-earth understanding of music’s role as an integral part of our daily lives. ‘Music isn’t an abstract pleasure,’ says Wyatt, ‘it is company. Why I like Duke Ellington and Charles Mingus – the Big Bands – is because every character in the band is identifiable as that person – there’s this group of humans in a room.’