Coming Together and Falling Apart: National Pavilions at the Venice Architecture Biennale

From the chapels of the first ever Vatican Pavilion to representing Britain in the era of Brexit, the national presentations for the 16th edition

The morning after Ireland’s historic referendum on women’s reproductive rights – resulting in a glorious, landslide victory over religious conservatism – I am, rather absurdly, sitting in a chapel. It’s one of ten temporary ‘places of worship’ installed on the island of­­­­ San Giorgio Maggiore as part of the first ever Vatican Pavilion at the Venice Architecture Biennale. Some of these mini-churches are reverently site-sensitive, subtly inserted into an atmospheric woodland setting. Others are indulgent, inconsequential follies: a timber-lattice temple by Foster + Partners feels, for instance, like a fancy entrance to a forest-park playground. One, however, is exceptional. This is Eduardo Souto de Moura’s beautifully elemental contribution: a rudimentary rectangular enclosure (constructed from bulky sandstone blocks) that forms a simple, unadorned sanctuary. As I linger inside after wandering through this island’s otherworldly gardens – suddenly tearful about who-knows-what – Souto de Moura’s chapel seems, for a moment, like a thrillingly pure and perfect piece of architecture, as stripped-back and settled as a centuries-old ruin.

Even so, I’m inclined to resist the rarified intensity and emotional impact of Souto de Moura’s building – preferring, indeed, to reject the Vatican Pavilion and all its works. Curators of this year’s biennale, Irish architects Yvonne Farrell and Shelley McNamara, have named ‘freespace’ as their title and guiding theme – and in this spirit, valuing situations of intellectual liberty and commitment over detached, submissive worship seems centrally important. Praise be, then, that among the biennale’s other national pavilions, significantly less pious and pacifying encounters with ‘freespace’ are possible.

Some such varieties of architectural freespace are humbly grounded in the occupations, urgencies and routine necessities of quotidian experience. I’m not (too) embarrassed to admit that many of my life’s most exciting moments have happened in libraries – and so I’m drawn with geeky delight to the Finnish exhibition ‘Mind-Building’: a multi-contributor micro-museum of library design. Conceived by Hanna Harris and curated by Anni Vartola, this is a celebration of past and future buildings – beginning with the stately Rikhardinkatu Library in Helsinki (founded in 1881) and looking forward to the opening of the state-of-the-art Oodi Helsinki Central Library later this year. The show is a rich, focused curatorial paean to the transformative power of public libraries, both on the individual imagination and on the wider society. In a similar civic, educational spirit, Greece’s exhibition ‘The School of Athens’ (curated by London-based architects Xristina Argyros and Ryan Neiheiser) calmly asserts the teaching and learning value of ‘unprogrammed spaces’, fitting out the serene white environment of their sizeable Giardini gallery with adjoining sets of wide wooden steps, onto which elevated 3D-printed models of academic ‘common spaces’ are presented for easygoing study. (Among the examples are courtyards at Cambridge University and Le Corbusier’s Carpenter Center at Harvard.) It’s an understated tribute to campus quads, staircases, corridors, quiet corners – to zones of casual, occasional conversation and, consequently to those incidental, unpredictable educational situations that occur outside the classroom, free from the prescriptive constraints of ‘learning outcomes’. (Over in the Arsenale, the Turkish Pavilion has taken education as its freespace topic too: handing the production of its exhibition project over to architecture students from all around the globe.)

Here and there at the biennale, assorted scenes from the presumed freespaces of ordinary life are documented in either optimistic or unsettled states. There’s an ebullient charm, for example, to the French Pavilion’s exploration of what the show’s curators, Paris-based practice Encore Heureux, have termed ‘infinite places’. Their pitch is that permanent renewal can be a primary architectural goal; and, taking ten converted historical buildings as case studies, they argue for perpetually re-imagining what, and who, an existing piece of architecture is for. (It’s a proposition that begins at home: the wooden display structures used in the exhibition have been re-purposed from Xavier Veilhan’s installation at the art biennale in 2017). Dominating the display – dwarfing a relatively conventional selection of models and drawings – is a wall-hung, ceiling-high collection of miscellaneous household items borrowed from each of the represented buildings: there are deckchairs, stereo speakers, cooking pans, skateboards, squash rackets, clocks, crockery, family photos, and a great deal more besides. These accumulated things are granted the Proustian designation of ‘madeleines’ – and collectively they become an anti-heroic memorial to the depth and diversity of everyday experience, calling to mind Robert Walser’s remark that ‘we don’t need to see anything out of the ordinary. We already see so much.’

But more anxious accounts of daily life are insistently present. The Swiss Pavilion’s Golden Lion-winning House Tour – a bright, mazy, mocked-up domestic interior, featuring freakish shifts in scale between rooms – has an undoubted comic lightness, but it’s uncanny and alienating too. Katerina Seda’s project for the Czech and Slovak Pavilion is a spoof agency tasked with re-populating city centres blighted by excess tourism. Remodelled as headquarters of the fictional ‘United Nations Real Life Organization’, the pavilion promotes job opportunities for people prepared to ‘visibly engage in normal life’, gaining payment for participating in ‘endangered activities’ such as ‘meeting neighbours and taking out the garbage’. The point is surely important for planners and architects – even if, as grandly sarcastic satire, the exhibition itself feels unproductively overblown.

There’s greater restraint to the Irish Pavilion’s reflection on landscapes where real life has been eroded. Co-ordinated by the Free Market Collective – a group of six architects: Jeffrey Bolhuis, Jo Anne Butler, Miriam Delaney, Tara Kennedy, Laurence Lord and Orla Murphy – this exhibition is an involving curatorial essay on the decline of Irish market towns, once the commercial hubs of rural communities, now bypassed into circumstances of increasing neglect. Depressed social conditions are here, nonetheless, presented in a relaxed, upbeat mode, as the Free Market collective creatively speculate on the return of vitality to marginalized localities. (The exhibition space itself, furnished with seats like the outside windowsills of country pubs, is understood as a situation of amiable, informal encounter). Not so – or not straightforwardly – at the British Pavilion. It is right, I think, to praise the British show as the most problematic and provocative to feature in Venice this year. Entitled ‘Island’, and curated by Caruso St John Architects with artist Marcus Taylor, this is a complex, contradictory exhibition: a troubled take on the term ‘freespace’, that forcefully demonstrates the deep difficulty of trying to represent Britain in the era of Brexit.

At Britain’s imposing Giardini building, two contrasting open spaces have been created. One is a dramatic new terrace on the roof of the pavilion, accessed by a steep external staircase: it’s a lofty position from which to look out over the Venetian lagoon – or even, dare I say it, to look down on the pavilions of neighbouring nations. Up there on the roof, tea is served each day at four, as if nothing else in the world need matter. And what, then, of the second open space? This is the building’s interior, which contains nothing at all. As with Santiago Sierra’s Spanish exhibition at the art biennale in 2003, the galleries have been left entirely empty. Combining spheres of detached distraction and disconcerting negativity, Caruso St John have produced a pavilion of self-consciously uneasy ‘freespace’ that seems commendably subversive: facing into difficult circumstances, while also effacing their own presence as representatives of the nation. 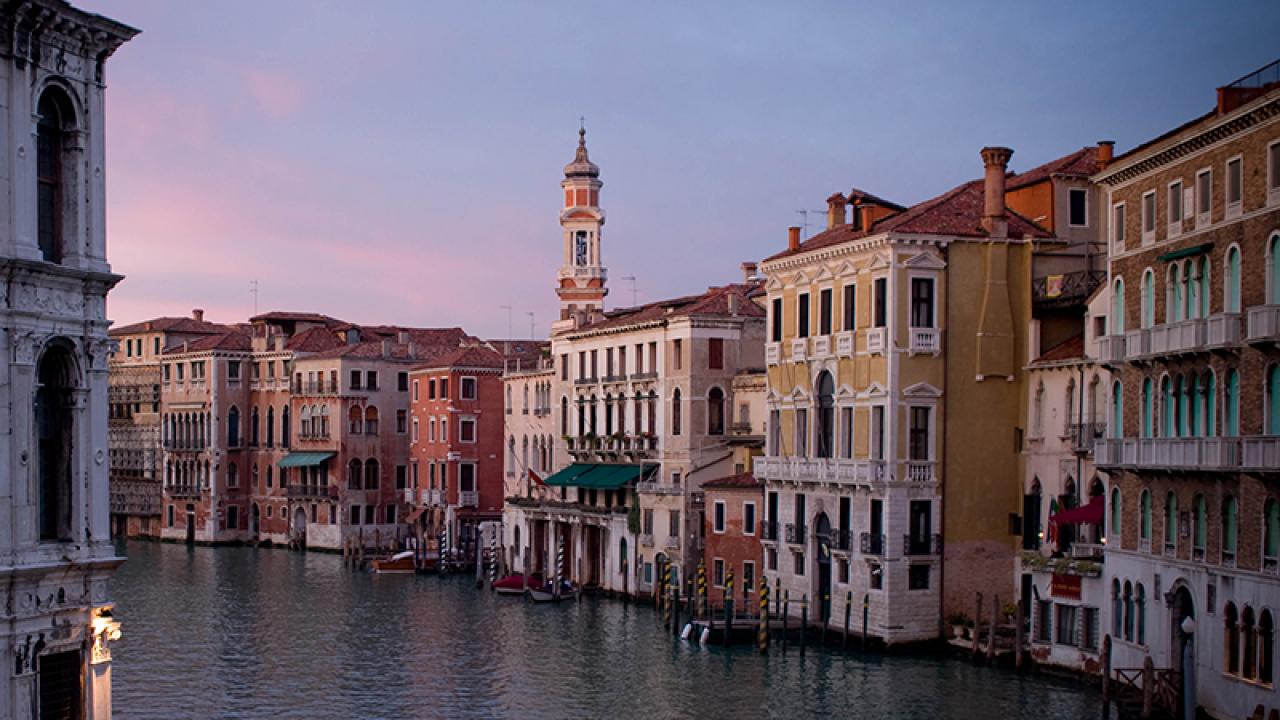 Critic's Guides
Frieze’s Guide to Venice: What To See at This Year’s Biennale

Your guide to the best on view in Venice – from national pavilions to collateral events and museum shows, from the Giardini to Giudecca