BY Alice Rawsthorn in Influences | 14 MAR 13

In a new occasional column, frieze asks a respondent to nominate the objects, people or ideas that have influenced them

During a peaceful era in the early 18th century, when colonial trade thrived, piracy became so profitable that successful buccaneers, like Edward ‘Blackbeard’ Teach and Bartholomew ‘Black Bart’ Roberts, strove to execute their raids swiftly and efficiently without wasting ammunition or incurring casualties. What better way of doing so than by terrifying their victims into speedy surrender?

One of their tactics was to raise a flag bearing two emblems: a human skull and a pair of diagonally crossed bones, which had signified death in so many cultures for so long that their meaning was instantly recognizable, even in the lawless, largely illiterate world of the high seas. That is how the skull and crossbones became a global symbol of dread, and how those early 18th-century pirates joined the long tradition of anonymous designers, whose instincts have hatched many of the most ingenious design projects.

What is design? It is a simple question, which is fiendishly difficult to answer, not least because design is a fluid, elusive phenomenon that has long been prey to muddle and misinterpretation. Even so, an unusually lucid response can be found in Vision in Motion, the 1947 book of essays by the Hungarian artist and designer László Moholy-Nagy.

Best known for donning factory overalls to teach at the Bauhaus in solidarity with industrial workers, and for imbuing the school with Constructivist fervour, Moholy-Nagy devoted his later career to liberating design from the commercial constraints imposed upon it by the industrial age. Describing design as an instinctive process of ‘resource-fulness and inventiveness’, he argued that it could be applied to different challenges in different contexts by different people, not just those who label themselves ‘designers’. ‘Designing is not a profession,’ he wrote, ‘but an attitude.'

Founded by the Austrian political scientist Otto Neurath in ‘Red Vienna’ during the 1920s, the Isotype Institute devised a system of pictorial symbols to explain complex economic, political and scientific phenomena to the public, especially to those who could not read or write. By doing so it fulfilled one of design’s most important roles: that of helping us to understand what is happening around us.

Working with researchers and statisticians, including his future wife Marie Reidemeister, Neurath identified which symbols were required and how best to combine them. Many of the motifs were beautifully drawn by the German artist Gerd Arntz. The Isotype team produced books, exhibitions and public information programmes throughout Europe and Africa, where Reidemeister worked in Western Nigeria during the 1950s, helping to prepare the country for independence. 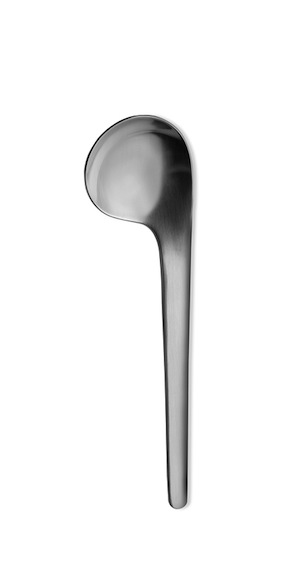 As a rationalist, the Danish architect Arne Jacobsen believed that every object or building should be designed as economically as possible with the sole objective of fulfilling its function efficiently. When devising a set of cutlery in the late 1950s for one of his buildings, the Royal sas Hotel in Copenhagen, he conducted intensive tests to ensure that each piece was made from the minimum amount of stainless steel, resulting in slithers of metal that look like abstractions of conventional knives, forks and spoons.

My favourites are the soup spoons, whose end-pieces were designed in the perfect shape and size to ensure that the soup was as tasty as possible by delivering the correct quantity to the mouth at the right temperature. Any bigger, and the soup would have cooled too quickly; any smaller, and it would have been too hot. Jacobsen also designed two types of spoon: for use by left-handed and right-handed people. The handles are attached to different sides of the end-pieces so that, if the spoon slips, the soup falls away from its user, rather than splashing them.

One of design history’s most entertaining dust-ups took place at the 1970 International Design Conference in Aspen, Colorado. The grandees of the design establishment attended as usual. Among them were such gifted designers as Saul Bass, George Nelson and Herbert Bayer, but they were almost all male, white and ideologically wedded to the commercialization of high Modernism, unlike the younger designers and students who showed up that year, drawn by the theme ‘Environment by Design’.

No sooner had Ant Farm, the Environmental Action Group and other American activists accused these luminaries of political lassitude and environmental neglect, than they themselves were denounced for bourgeois complacency by a French contingent of designers and intellectuals, led by Jean Baudrillard. After proclaiming that there was ‘nothing better than a touch of ecology and catastrophe to unite the social classes’ (a phrase later used by Martin Beck as the title of an exhibition about the 1970 Aspen conference) Baudrillard denounced the shindig as design’s equivalent of ‘Disneyland’.

Having emerged as a gifted graphic designer in the 1960s and early ’70s by designing books for MIT Press — including Robert Venturi, Denise Scott-Brown and Steven Izenour’s Learning from Las Vegas (1977) and Herbert Muschamp’s File Under Architecture (1974) — Muriel Cooper reinvented herself as a pioneer of digital design.

Cooper discovered computers by chance after walking into the wrong class at mit one day in 1967, and instinctively understood their importance even though she never got to grips with them technically. She also recognized the need to translate the then-inscrutable data on computer screens into text and images, which could be easily deciphered by people who, like her, were baffled by the technology. Sadly, Cooper died in 1994, but every attempt to enable us to navigate digital interfaces effortlessly and intuitively still owes something to her. 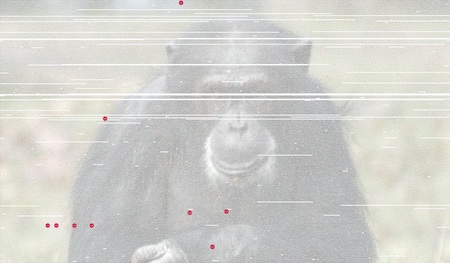 What is the genetic difference between human beings and chimpanzees? You could plough through several scientific tomes to find out, or glance at Human vs. Chimps, the data visualization in which the software designer Ben Fry depicted a chimp’s head from 75,000 digitally generated characters, each representing a letter in the DNA sequencing of the FOXP2 gene. There are nine red dots among them, signifying the only key differences between a chimp’s genetic coding and a human’s.

Humans vs. Chimps was constructed using Processing, the computer programming language designed by Fry and Casey Reas in 2001 as a means of translating huge quantities of complex, rapidly changing data into clear, compelling digital images. As computer power increases, so will the flood of information. Data visualization has emerged as a stunningly effective design solution to the ‘data deluge’ crisis, just as Isotype’s printed symbols demystified otherwise daunting social and political changes nearly a century ago.

We are living at a time when once-familiar objects are disappearing from our lives. Any product is at risk if its function can be fulfilled as effectively by the software on a digital device like a smart phone or tablet that can do numerous other things too. Those imperilled objects will only survive if they offer us something enticing that eludes their digital equivalents, whether it is aesthetic, sensual or functional.

The printed books made by the Dutch designer Irma Boom achieve all three. By experimenting with different papers, bindings, inks, fonts and printing techniques, she produces visually luscious publications enlivened by beguiling textures, scents, symbols and colour codes. Not only do those books look, feel and, often, smell glorious, every one of her design decisions enhances our understanding of their contents.