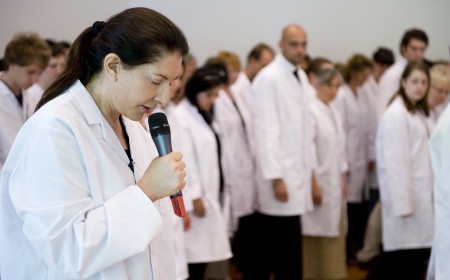 Not so long ago, to many people ‘performance art’ instantly evoked visions of bodies, possibly naked, doing something extreme or absurd. The themes it would conjure were quite probably various: from control to anarchy, movement to stasis, sexuality to suffering – often under the umbrella of existential exploration. While this reductive stereotype bears scant relationship to the breadth of contemporary and historical artistic practice that uses performance as a medium, upon experiencing ‘Marina Abramović Presents’, a group exhibition of live works presented at the Whitworth Art Gallery, I fear it is an idea that will continue to persist.

The exhibition ran for four hours a day, for just over two weeks. Following an introductory performance by Abramović, each artist performed for three hours (either a new work, or an adaptation of a previous action) throughout the empty gallery spaces. The format of a live exhibition of performance is of course a valid curatorial choice, albeit one that has been experimented with in various ways recently (whether in the solo practices of Roman Ondák or Tino Sehgal, or group exhibition events such as ‘Living Currency’, 2007-8). Experienced together en masse, however, ‘Marina Abramović Presents’ created a situation that verged on a parody and risked reducing the medium of performance to a series of clichés.

Performance was immediately positioned as endurance test, as – dressed in white lab-coats – we (the audience) undertook ‘The Drill’. Devised and run by Abramović, this hour-long workshop was designed to prepare us to understand and experience durational performance. As a Madonna-esque self-help guru, preacher, therapist and militant gym teacher rolled into one, Abramović excelled at keeping the audience compliant, through a series of mental and physical exercises, ritualizing basic actions to slow us down and focus on ‘being’. Yet masochism, which permeates much of Abramović‘s work, was persistently emphasized as the key to experiencing performance, as the artist explained that only by doing things we hate can we reach the necessary mental and spiritual plane. A meditative state might be what we want from a yoga class, but is it really what we want from art?

What followed unsurprisingly thematized the artist’s body as a tool or site for exploration, the history of which Abramović explored in Seven Easy Pieces at MoMA in 2005, for which she ‘inhabited’ iconic images of seminal works from performance history (including Vito Acconci’s Seedbed, 1972 and Valie Export’s Genital Panic, 1969). As testament to Abramović‘s signature style and influence, many of the artists selected by Abramović created work in the same vein, though most frustratingly failed to add anything other than contrived ideas of sexuality, shamanism and suffering.

Sexuality and gender were addressed by Yingmei Duan in the work Naked, for which she stood awkwardly naked, sporadically rubbing herself up against others (always men during my experience), her face contorted as if in pain. Equally transparent, Melati Suryodarmo interacted with a pane of glass, pressing herself against it as she moved around the room repeating ‘I love you’ (which formed the title of the work). Presented as earnest gestures, the works seemed dated and only served to reinforce common stereotypes.

Alistair McLennan (pictured above) played the role of shaman with a pungent performance-installation (a room filled with rows of shoes surrounding a banquet table piled with dead fish, earth and split-open pig heads), performing unfathomable gestures as he wandered around the room dressed in black, with a tree branch tied to his head with a pair of tights. Momentarily compelling in its absurdity, after attending to it with a new appetite for duration inspired by ‘The Drill’, this work only re-enforced my sense of cynicism, the series of inexplicable rituals becoming farcical with time. Joseph Beuys, the archetypal artist-shaman, wouldn’t have been caught dead with a pink stiletto on his head.

Masochism and machismo reigned as Fedor Pavlov-Andreevich re-enacted the life and death of Vitaly Titov (1946–79), a Soviet engineer who apparently survived for 20 days with an artificial body attached to his head. In reality Pavlov-Andreevich created an altar-piece fashioned into a ‘glory hole’, through which the audience made offerings of food and drink directly into his mouth (he charmingly spat out the biscuit my companion fed him). Although based on intriguing source material, the work was undermined by its overt quasi-religious and sexual iconography. In another extreme gesture, Nico Vascellari sat at the base of a flight of stairs repeatedly banging a stone on the floor creating a deafening sound, forcing you to leave after a few seconds. His ability to endure this for four hours a day was remarkable, but any further meaning was lost, as it became just another ritualized gesture.

Marie Cool and Fabio Balducci’s ongoing sculptural creation was fascinating to watch and Kira O’Reilly’s re-interpretation of Duchamp’s Nude Descending a Staircase, No. 2 (1912) was conceptually interesting and physically remarkable, as she retained precision control for three hours, whilst slowly tumbling naked down the stairs. The first work I encountered also had an entrancing and ephemeral beauty, as a vulnerable Terence Koh lay delicately curled on the floor, around an iPod playing Nat King Cole’s ‘Mona Lisa’ (1950), legs whitened, wearing a crushed pearl dress – yet the audience standing over him in their clumsy, oversize lab-coats made him seem more like a scientific specimen, as the controlled nature of the experience detracted from any individual engagement with the work.

Under these circumstances the moment of genuine encounter was eradicated, as the viewer’s role was over-determined by the framework imposed from the start. This, alongside the sense of faux-reverence engendered by Abramović in ‘The Drill’ – do we need to be especially ‘prepared’ to view a film, painting, performance, sculpture or any other type of art? – only served to compound the homogeneity of the performances, rather than allowing them (and the audience) some space to breathe. The works might have been ‘live’ but rather than an exciting, contemporary presence, performance here felt like a passé genre from the ‘70s.