BY Michael Bracewell in Profiles | 29 JAN 18

Mark was some kind of genius. I knew him in the 1990s and saw The Fall many times. They could be sublime or atrocious.

Amongst other things – such as being one of nature's aristocrats, like Thelonious Monk – Smith was one of the most original postwar British writers. He cared deeply about the written word and its possibilities. Take just one track – 'Wings' for example – and read it as literature. Fractured syntax, collaged narrative, word functions reversed. Yet made, by Smith, coherent, strange compelling truth. Then play the same track, with its scything guitar repetitions and biscuit-tin drums, and it has the sheer energy of Bo Diddley. 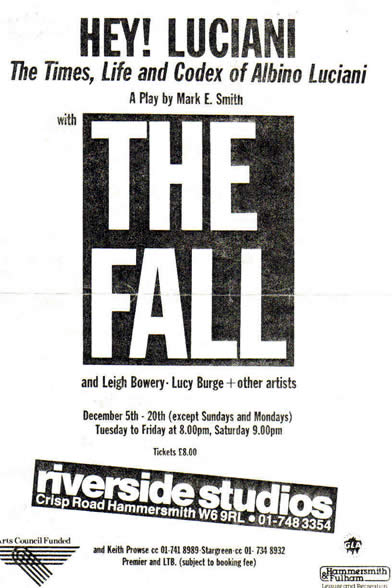 Tracks by The Fall were Northern Gothic surrealism, Howling Wolf by way of Prestwich; hilarious, visionary, post-industrial history lessons - this richness sharpened to razor edge for being disciplined by utter musical rigidity. (Smith would dock a musician's pay for improvising a riff.) Seeing Mark's play, 'Hey Luciani!' one sunny evening at The Riverside Studios, with Kathy Acker, the production seemed – felt – instantly historic. What I imagine would have been the skinny energy of early Dada. Smith's collaboration with choreographer Michel Clark and clubber-iconoclast Leigh Bowery felt tense, raw, and more than touched with genius.

Seeing The Fall at Planet K on Oldham Street in Manchester, late '90s, shortly after The Marshall Suite had been released. Smith's 30-minute rendition of '(Jung Nev's) Antidote' was unforgettable: channelled, pulverising, transcendent. Watching him stalk around the stage, unsmiling, face set, de-tuning instruments and kicking over mic stands mid-track. An ugly mood. But the tension and the ugliness were as necessary as the amps.

At his best – and most accessible – Smith combined the glamour of Johnny Cash with the beguiling contrariness of Captain Beefheart or Can. But he was an artist in a proud and profound sense, whether he liked it or not, and his originality was far greater than the mere sum of comparisons that will now be made.

Smith could be treacherous, unnecessarily confrontational, cruel. Also kind, very funny and piercingly astute. I'm sure he hated being thought of as a cranky cool northern national treasure, wheeled out like a club comic to say outrageous things about Live Aid or The Stone Roses. Celebrate his words and music – the deep-felt emotion, creative violence and poetic insight of his epic creation.

He was a total artist, unwaveringly true to his vision, utterly uncompromising, thrilling, unnerving, capable of extraordinary flights of poetry.

Sixty is no age, but what did we expect? He leaves a great body of work and a trail of devastation. But like most artists, he was after beauty, too.