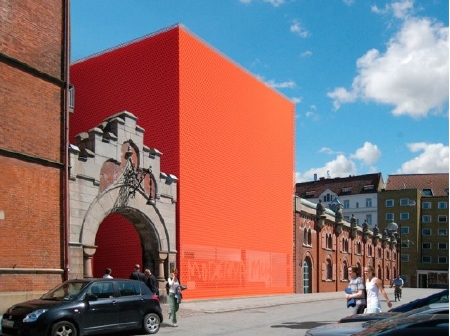 Sweden has a new modern art museum: on Boxing Day, Stockholm’s Moderna Museet opened their second branch, housed in the old Rooseum building in Malmö, (which, before it was converted, was a derelict power station). Ostensibly inspired by the Tate model, the new venue – complete with a turbine hall and signature font – currently offers a selection from the permanent collection in Stockholm as well as two temporary exhibitions: Luc Tuymans and Astrid Svangren.

After wandering through the relatively small museum space – Tuymans’ bleached-out paintings on the ground floor and old friends from the collection on the second floor – paying my respects to Robert Rauschenberg’s Monogram (1955–9), which has become something of a museum mascot, I find my way to Svangren’s installation.

Svangren, who graduated from Malmö Art Academy in 1998 and is currently based in Copenhagen, has been given only one small gallery, but she certainly has made good use of it with her installation, what I remember… (2009). The complete title, or rather Svangren’s poem that accompanies the space, (originally in Swedish) reads: ‘What I remember / that I was hot with fear / a thin cloth/ babble and a white collar / but maintaining of a condition / and all that I could not see.’ The artist, who always carries a notebook, sees her writing as another layer to her artistic practice and she is often inspired by novels and poetry.

The installation, which comprises four large panels mounted on the walls and an ascetic, Shaker-style wooden screen dividing the space, disallows for separate viewing of the works as isolated objects. Not confined to a single colour scheme or technique, Svangren’s spatial and pictorial concerns fuse into installation. Layers of paint, silk paper and veiled mirrors dominate the works, while beyond the screen a monochrome, warm red panel balances the space from the far wall.

As a painter, Svangren creates her own version of the medium: silk paper partially covers a pink panel and spills out on to the floor in long sheets, which viewers must navigate. Opposite is a mirror covered in black and brown paint. Embedded in the lightness of paper and the often buoyant colours, the viewer enters into the art as the mirrors reflect the room and its inhabitants, in addition to acting as canvases. At once floating and anchored, Svangren’s manner of extending her crisp paintings into the gallery space is reassuring to say the least.

This museum inauguration is no grand spectacle or awesome tour de force. Save for Svangren’s, the exhibitions don’t seem to celebrate the newborn institution or create novel perspectives. This is a long way from the ‘new institutionalism’ of the final years of Rooseum (which closed in 2006 due to a lack of funds) but better, perhaps, to play it safe. Rooseum, for all its progressive ambitions and commitment, was only visited by some 20,000 people in the year before it closed. Presumably, in order to be truly relevant and contribute to the regional and national art scene, Moderna Museet needs to be so much more. Here What I remember… proves to be auspicious, albeit on a small-scale.