‘No-Grupo: un zangoloteo al corsé artístico’ (No-Grupo: a shake to the artistic corset) was an exhibition looking at the work of the infamous Mexican ‘no-group’ – or, as they would have preferred, ‘group strategy’ – active between 1977 and ’83. No-Grupo’s work began with an uninvited contribution to the 1977 Paris Biennial, for which they sent masks made from photographs of themselves to be worn by the audience. At the time, No-Grupo had several itinerant members and four permanent members: Maris Bustamante, ‘the crusher of academia’; Melquiades Herrera, ‘winner of the Nobel prize in art’; Alfredo Nuñez, ‘proprietor of abandons’; and Rubén Valencia, ‘ex-geometric artist’. Like characters in a Roberto Bolaño novel, they were Mexico City’s self-appointed ‘Savage Vanguard’. They chose not to call themselves a collective, opting instead for the name No-Grupo because, as they declared, ‘we are not a forced and fraudulent collectivism which frees responsibility in confortable anonymity.

The No-Grupo is a workshop of critique, of attitudes, and positions.’ No-Grupo were agents provocateurs determined to destabilize what they saw to be the prim art world. The group was against object-based art, and could be deemed part of the Conceptual tradition, yet this was a term they avoided for its Euro-American-centrism. Instead, the Peruvian critic, Juan Acha, described their work as ‘non-objectualism’, which disdained traditional fetishism for the art object itself. No-Grupo used the phrase ‘montage of plastic moments’ to describe their actions. Each of the group’s members would create an individual work that would take as its pretext a common theme: the sum of works would then constitute the ‘montage of plastic moments’ and would include mail art, photocopies, letters, ephemera, performance instructions, photographs and Super-8 films. Their second piece, Presencia-Ambiente a Gunther Gerzso (Presence – Ambience for Gunther Gerzso, 1978), consisted of a collaborative ‘montage of plastic moments’, for which the group worked around and with Mexican artist Gunther Gerzso. One of the pieces involved Gerzso agreeing to be kidnapped and sacrificed by his captors. Another, Trece planos molidos de Gerszo (Thirteen Crushed Gerzso Planes) placed pigments of the same colours used in one of his paintings, inside small plastic bags so that the recipient of the work could have a portable version of the painting. A similar ‘montage’, Atentado al hijo prodigo (Attack on the Prodigal Son), was made in 1979, around the figure of artist José Luis Cuevas, specifically for his solo retrospective, ‘The Return of the Prodigal Son’, at the Museo de Arte Moderno. 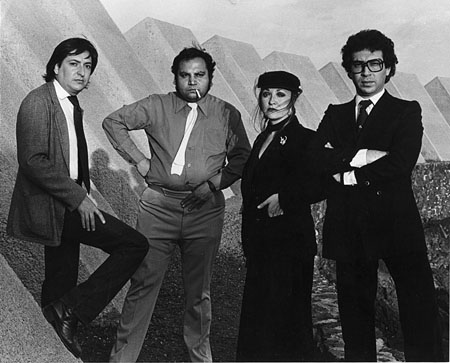 No-Grupo visited Cuevas, recorded conversations and wrote a postscript to his exhibition catalogue critiquing the art-world star system and the very idea of the prodigal son as artist. As they wrote: ‘a prodigal son is a defeated son who had to return to be the same. The father of a prodigal son is also a loser.’ They also created a ‘legitimation’ system in case anyone might find that one of their Cuevas paintings might be a fake. No-Grupo’s work was humorous, including, for instance various artists publications, some of which consist of bricks (Artists Books I II III, 1982), business cards with ludicrous job titles, and, perhaps the piece that made them most well-known in Latin America, a day-planner entitled agenda Colombia-83. Made for the First Latin-American Colloquium of Non-Objectual Art and Urban Art, in 1983, it was intended to support the M-19, or April 19 dissident movement in Colombia. It includes the work of more than 40 artists who were asked to contribute by way of thinking through the relation and position of their artistic practice to processes of social change.

Another piece, Radio-novela del No-Grupo, consisted of a radio-play made in the context of the First International Symposium on the Cultural Administration of Museums at New York’s Museum of Modern Art (1980), where the artists broadcast, allegedly from the museum patio, a description of how mediocre works were being put in FBI trucks to be cremated and to make place for better, newer pieces. Bustamante’s infamous Taco Patent (1979), ‘a weapon for Cultural Penetration’, dared audiences to ‘commit an erotic act: eat a taco’. Bustamante patented a 65-metre-long taco, scandalizing Mexican audiences because of the idea that someone could patent such a public cultural symbol and basic foodstuff, not to mention eroticize it. This exhibition, the first of its kind, is of enormous art-historical value, not only because of No-Grupo’s influence on Mexican artists today, but also because it reveals the fact that during a period when Mexican art seemed to be sunk in irrelevance (the 1970s and ’80s were the darkest days of the Partido Revolucionario Institucional’s dictatorship, which led to an anachronistic ‘official’ art), there were artists producing work akin to much of what was going on overseas, yet from an entirely local perspective. No-Grupo were also pioneers in the appropriation of popular urban aesthetics, low-cost and ‘poor’ materials, at a time when the artistic discourse was all about grandiloquence and propagandist ideas of Mexican identity. As Herrera explains, when asked what he gained by working with No-Grupo: ‘I learned that rhetoric and the instruments of graphic design or advertising could stop working in service of a client so as to become vehicles of personal expression, where “I” try to become all of you, my neighbourhood, my city, my country, my time.’