‘My images are about the silence that envelopes the ties between Greenland and Denmark. I was born into that silence myself,’ the late artist Pia Arke told Swedish newspaper Dagens Nyheter in a 1995 interview. Accessible only by passing through Arthur Jafa’s lively concurrent exhibition, ‘Magnumb’, Arke’s first major museum retrospective, ‘Dream and Repression’ at Louisiana Museum of Modern Art, is indeed quiet in comparison. Spread across four low-ceilinged rooms and awash with arctic colours, remote groupings of photographs, collages, vitrines and video works resonate like small islands of activity – sitting somewhere between an icy archipelago and a forensic lab.

The exhibition’s introductory work, Legend I–V (1999), shows how Arke – born to a Greenlandic Inuit mother and a Danish father – deftly wove biographical components of her own complex history into her art. Five bold collages comprising reassembled vintage maps of the regions around Ittoqqortoormiit – the world’s longest fjord and Arke’s birthplace – are rendered in shades of red and blue, turning the fjords into the bronchial tubes of a lung. Onto these colourful, geographical lobectomies and below opaque parchment with red, cutmark-like cartographic signatures, the artist affixed photos of, amongst others, her young mother. Reminiscent of cheerful family portraits, these photos were originally published in a decisive Danish polar expedition report used to eventually manifest Denmark’s claim over Greenland at the World Court in Hague in 1933. In a nod to this history, Arke used flour, coffee, sugar, oats and rice – all colonial imports to Greenland from Denmark – to cement the maps’ contours and, in Legend III, to trace the lines of a face that, for an uncanny moment, seems to stare back at you.

To quote the exhibition literature, Arke’s practice is often considered ‘an early example of postcolonial thinking’. However, it would be a mistake to see her work as merely the product of cultural essentialist thought. Indeed, moving through the exhibition, her approach reveals itself as personal inquiry leveraged as political tool. In Nature Morte alias Perlustrations 1–10 (1994), for example, ten black and white prints document Arke’s best friend’s mastectomy interspersed with archive material from Danish colonial history. The artist also frequently used her own body, as in the performance Arctic Hysteria (1996), presented through video documentation, in which she slithered naked over a large photograph of her native landscape before tearing it to pieces.

Across the room, Arke’s standout series, ‘Self-Portrait’ (1992), shows her technical skill at photographic layering: the prints are products of the artist’s self-made, human-sized camera obscura, which she transported to the rocky plateaux of Narsaq in Southern Greenland, her childhood home. Letting the image of the landscape slowly imprint itself on photosensitive paper inside the camera obscura, she then superimposed her own naked (pregnant) body onto the images during the development process, creating a haunting, otherworldly place in which time is at once meticulously retained and absolutely displaced. By inscribing her figure onto Narsaq’s sublime scenery, Arke is the architect of her own othering – a critical gesture reminiscent of the montage technique described by filmmaker Trinh T. Minh-ha in the essay ‘A Minute Too Long’ (1991).

Throughout the exhibition, Arke’s use of performative strategies – montage, staging, re-enactment – create a sense of belonging. As she wrote in her theoretical text Ethno-Aesthetics (1995), her ancestry meant she was neither the ethnographic object nor its subject. Yet, this manifold of voices – artist, ethnographer, explorer – enabled her to identify what she referred to in Ethno-Aesthetics as a ‘third place’ from which to speak: a way of breaking the omnivorous silence. As this reflective exhibition shows, for Arke there was no postcolonialism; colonialism was an absolute requiring constant critical confrontation.

Pia Arke’s ‘Dream and Repression’ is on view at Louisiana Museum of Modern Art, Humlebæk, Denmark, until 2 Jan 2022.

Sofie Krogh Christensen is a writer and curator. She is based in Berlin, Germany. 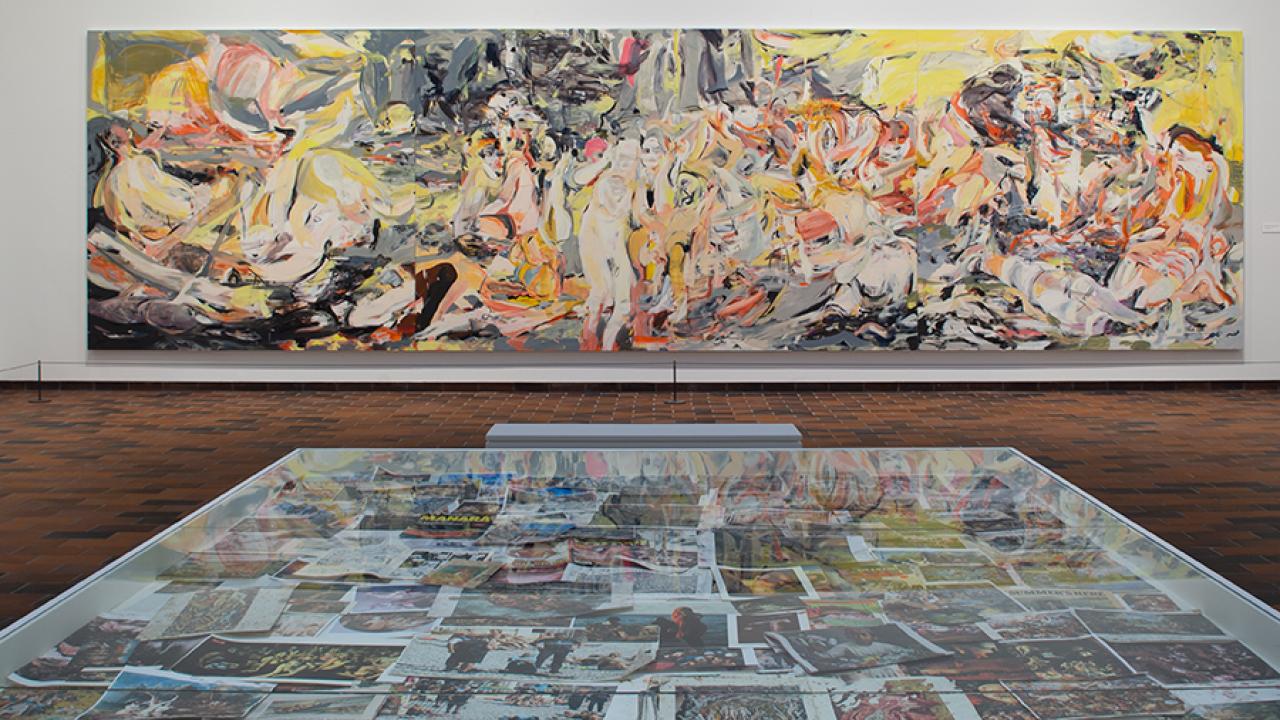 A retrospective at Denmark’s Louisiana Museum of Modern Art reveals the painter’s universe: life as a vortex of activity, sound and fury which may ultimately symbolize nothing