The past cannot necessarily be reasoned with, nor simply erased. In Kyiv, a city of turbulent history, this is not simply a conceptual question but a pressing political problem. Recently I visited the Visual Culture Research Center (VCRC), a collective of artists, activists, curators and researchers based in central Kyiv. I sat in their second-floor office and watched CCTV footage on a mobile phone. On 7 February 2017, 15 men entered the gallery with their faces concealed. They assaulted the guard, destroyed the exhibition, and left. They were never identified. You can watch the video on YouTube. For me – a coward – to watch such violence, in the very space where it took place, was an unsettling experience. It wasn’t the first time either: some of the team were attacked in the street in 2014, from when director Vasyl Cherepanyn is yet to fully recover.

Why is this happening? In February 2013, the Maidan revolution forced the hugely corrupt pro-Russian President Viktor Yanukovych to flee the country. The following month, Putin annexed Crimea. The new government of Petro Poroshenko – also considered corrupt – has embarked upon a policy of ‘decommunisation’ as part of a social and political pivot away from Russia, towards Europe. In addition to removing monuments and changing place names, new laws have branded the Soviet Union ‘criminal’. Ukraine’s communist parties are banned from elections. As Soviet-era architecture is swept aside by developers, many believe that the policy has also fuelled tolerance of violence. ‘Ukrainian right-wing radicals feel more confident than ever to attack and destroy whatever they do not like,’ says VCRC’s Anna Tsyba.

In response, a counter-current of artists, activists, academics and researchers is attempting to rethink Ukraine’s past in more productive fashion. In 2015 VCRC along with curators Hedwig Saxenhuber and Georg Schöllhammer, helped to organize the ‘School of Kyiv’, a new biennial with an international scope, which saw exhibitions and event taking place in multiple locations across the city. Politically astute artists such as Sasha Kurmaz see the city as site of complex tensions between competing interests. By Holosiivska metro, artists occupied a vast, dilapidated former film school ahead of September’s Gogolfest festival of theatre and performance. Nightclub Closer hosts art exhibitions in a ribbon factory built in 1896 – when Kyiv was part of the Russian empire.

Housed in a river-side shipyard, IZOLYATSIA (relocated after its first space in Donetsk was seized by pro-Russian separatists) combines exhibitions with studios and impressive printmaking and photography facilities. A new residency programme has just launched in partnership with the British Council. For ‘Social Contract’ Izolyatsia commissioned four temporary works for a pedestal left empty after the removal of a statue of Lenin, also a site of execution during the Nazi occupation. Artist Isa Carrillo installed a column of healing herbs to cleanse the sins of the recent past with the soothing myths of pre-modernity. When the installation was vandalized locals helped to repair it.

More officially, the state-funded Mystetskyi Arsenal – a multipurpose arts complex which hosted Ukraine’s first biennial in 2012 – hosts exhibitions in a vast, vaulted former arms warehouse. An exhibition of work by 67 young Ukrainian artists, selected from an open call, opens there this month titled ‘Today, which never happened’. In Sofiivs’ka Square, Darya Koltsova’s temporary installation commissioned by the International Red Cross highlights the plight of the families of those missing in the conflict in the east of the country. Constructed from reclaimed doors and window frames, it also – quite literally – reframes one’s view of the city outside. Meanwhile, the UK’s Sara Nesteruk is showing animated films in the Holodomor Victims Memorial, which commemorates the Soviet-instigated famine/genocide of 1932–3 which killed at least seven million.

A desire to rethink the past informs much of the work at Kyiv’s best-known arts institution: the PinchukArtCentre. Founded and funded by Ukrainian businessman Victor Pinchuk, the centre opened in 2006 in a six-floor building by architect Philippe Chiambaretta. In its early years, some exhibitions leant on celebrity associations (works from the Elton John collection, Sir Paul McCartney’s paintings). Others brought major names like Damien Hirst or Takashi Murakami to Ukraine for the first time or championed home-grown talent. More recently, under curator Björn Geldhof (since 2015 also Artistic Director at YARAT, Baku, Azerbaijan) there has been a shift to more politically engaged programming. Geldhof has also overseen the launch of two art prizes for artists aged 35 or under: the PinchukArtCentre for Ukrainian artists and the international Future Generation Art Prize. A provocative text piece by Kurmaz adorns the roof of the adjoining Besarabsky Market: a commission for the 2013 prize, which translates to something like ‘don’t philosophize, have sex’.

Current exhibition ‘Fragile State’ asks Ukraine’s urgent questions within broader historical or international contexts. The title alludes not only to the historical and contemporary fragility of the nation state of Ukraine but also to the psychological state of people raised first in a colony of Russia then under crony capitalism. Ai Weiwei’s Dropping a Han Dynasty Urn (2016) reimagines his famous early work in Lego; Douglas Gordon’s video installation The End of Civilisation (2012) shows a grand piano burning by Hadrian’s Wall. Santiago Sierra’s performance series, Veterans of war facing the corner (2011-ongoing) here involves veterans from the live war in Donbas, eastern Ukraine. Marina Abramović’s Generator (2014/2017)demonstrates that, even rendered deaf and blind in the ‘safe space’ of the art gallery, we still bring our personalities – and our pasts – with us. On my visit the centre is buzzing with young visitors: around 1,800 people pass through the doors each day.

Since May 2016, PinchukArtCentre has been investing in vital research. Outside of official (Soviet-era) channels, much remains unknown about the country’s recent art history. The centre is therefore commissioning research, collating artists’ personal archives (many rarely seen beyond an immediate circle of family and friends) and carrying out their digitization. A freely accessible website is in the pipeline. On-site, a library and exhibition programme make this activity public. For me, these works by Ukrainian artists are the highlight of my visit to PinchukArtCentre. A thoughtful, nuanced exhibition ‘Motherland on Fire’, conceived with recently formed artist group Concrete Dates Collective, includes a Sergey Bratkov photo installation poking fun at Arkady Shaikhet’s machine-age heroism and a 1949 painting by Serhiy Grygoriev, from which the artist himself later erased a portrait of Stalin. Censorship, it suggests, is not simply imposed from the outside. Elsewhere, even showing Volodymyr Kozhukhar’s 2005 painting of a train from the artist’s ‘My USSR’ series or the oddball Soviet-era manifestos of Fedir Tetyanych could be construed as controversial in the current climate. ‘What we’re doing is not just a gesture but consistent investment that allows Ukraine to think historically about its own position,’ says Geldhof.

From a very different position, the inspirational Soshenko 33 is also looking to the past to map out possible futures. A villa turned studio complex in a semi-wild garden on the outskirts of Kyiv, Soshenko 33 once provided artists with a place to escape from the strictures of Soviet control. The current exhibition brings the story to life through archive photographs and documents. Today, having fought and won against an ugly development proposal, Soshenko 33 combines the specificity of its unique location and history with the energy of its young artists and local community support. They are currently taking part in an exchange with Tokonoma, Kassel for documenta14 and, like IZOLYATSIA, also hosting artist residencies supported by the British Council.

Ahead of Gogolfest, I met with artist Zhanna Kadyrova in a makeshift canteen inside the peeling old film school. We sat at a table whose paper cover was strewn with pens and pencils. Previous guests had written in Chinese, drawn up a calendar, sketched a face. Around that face, Kadyrova drew semi-circles, like abstracted halos, in purple pen. Like her art, not once did these fresh marks conceal or erase those already there; rather they responded to them and added something new. It reminded me of what I was told at Soshenko 33: ‘We don’t want to destroy our history,’ said artist-curator Anna Sorokovaya. ‘We want to keep, rethink and develop.’

The 2017 edition of the Kyiv Biennial, ‘The Kyiv International 2017’, organized by the Visual Culture Research Center, will take place October 20 – November 26 2017. 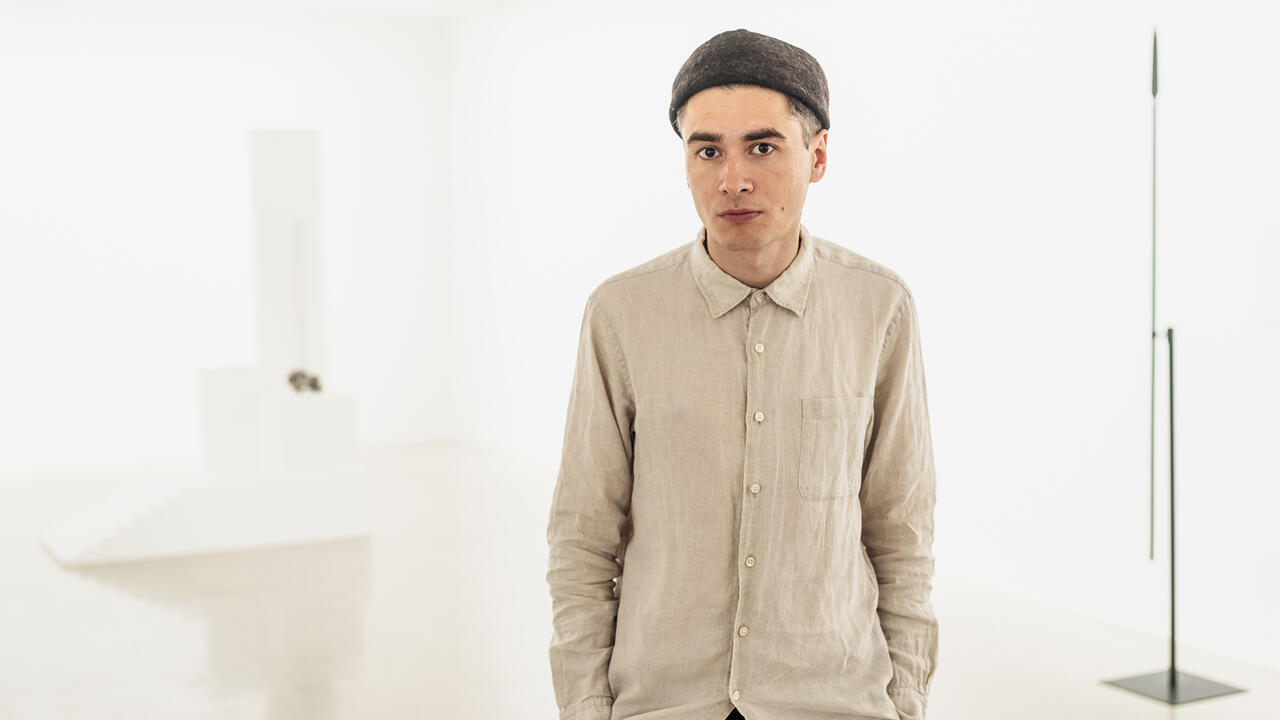