Salvador Allende's attempt to create a 'socialist internet, decades ahead of its time' 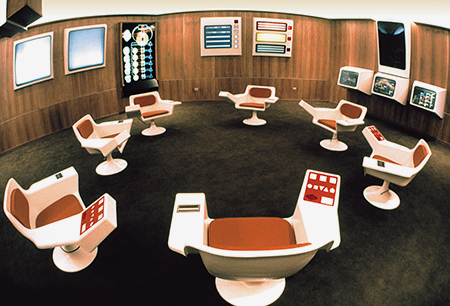 This is a tantalizing glimpse of a world that could have been our world. What we are looking at is the heart of the Cybersyn system, created for Salvador Allende’s socialist Chilean government by the British cybernetician Stafford Beer. Beer’s ambition was to ‘implant an electronic nervous system’ into Chile. With its network of telex machines and other communication devices, Cybersyn was to be – in the words of Andy Beckett, author of Pinochet in Piccadilly (2003) – a ‘socialist internet, decades ahead of its time’.

Capitalist propagandists claimed that this was a Big Brother-style surveillance system, but the aim was exactly the opposite: Beer and Allende wanted a network that would allow workers unprecedented levels of control over their own lives. Instead of commanding from on high, the government would be able to respond to up-to-the-minute information coming from factories. Yet Cybersyn was envisaged as much more than a system for relaying economic data: it was also hoped that it would eventually allow the pop­u­la­tion to instantaneously communicate its feelings about decisions the government had taken.

In 1973, General Pinochet’s cia-backed military coup brutally overthrew Allende’s government. The stakes couldn’t have been higher. It wasn’t only that a new model of socialism was defeated in Chile; the defeat immediately cleared the ground for Chile to become the testing-ground for the neoliberal version of capitalism. The military takeover was swiftly followed by the widespread torture and terrorization of Allende’s supporters, alongside a massive programme of privatization and de-regulation. One world was destroyed before it could really be born; another world – the world in which there is no alternative to capitalism, our world, the world of capitalist realism – started to emerge.

There’s an aching poignancy in this image of Cybersyn now, when the pathological effects of communicative capitalism’s always-on cyberblitz are becoming increasingly apparent. Cloaked in a rhetoric of inclusion and participation, semio-capitalism keeps us in a state of permanent anxiety. But Cybersyn reminds us that this is not an inherent feature of communications technology. A whole other use of cybernetic sytems is possible. Perhaps, rather than being some fragment of a lost world, Cybersyn is a glimpse of a future that can still happen.