‘They want to reinvent themselves to become themselves,’ Cherise muses to her record store colleagues in the sixth episode of this year’s Hulu adaptation of the Nick Hornby novel High Fidelity (1995). They are discussing their ‘top five underdogs’ in music, citing Kraftwerk, The Go-Go’s and Prince among other artists who staged comebacks – either inevitable or contrived. Cherise herself (played be Da’Vine Joy Randolph) is the show’s top underdog. She works at Championship Vinyl, a self-consciously hip Crown Heights record shop owned by the disaffected Rob (Robin, played by Zoe Kravitz). Cherise is the true depth of the series. Often belittled by her co-worker Simon (David H. Holmes) and Rob, who dismiss her dreams of being a professional musician, she is an emblem of a kind of Black creativity that demands the space, privacy and revision often denied to Black performers. She points to the trappings of professionalism in the arts by hiding away until she feels ready, self-actualized. Her character offers insight, if we are willing to receive it, into a pernicious idea, implicit in the history of Western entertainment since captive Black bodies were forced to perform on slave ships, that all ‘negroes’ are born singing and dancing – ‘Rhythm-n-ning’, as the 1957 Thelonious Monk track riffs.

Cherise is an unlikely anecdote to some of this terribly flawed thinking. Her energy exposes the line between authenticity and diva-ism, self-respect and self-promotion, dreams deferred and laziness, modesty and self-sabotage. She is a new breed of hero who makes the show worth watching and more than a typical romantic comedy. It is her we leave the series most wanting to befriend, to be a little more like in warmth and intuition, to understand and love.

We first hear of Cherise as Rob lists the people she would call during the apocalypse. After going through everyone closest to her, she ends with a dismissive: ‘And Cherise, I guess.’ At this point in the series we haven’t yet met Cherise, but she is introduced as a nagging afterthought. Pathological solipsism is one of Robin’s tragic personality flaws but, since she is the narrator, it becomes Cherise’s cross to bear and internalize. Cherise first appears on screen entering Championship Vinyl for a shift. She immediately changes the music to play a song she dreamed about the night before, ‘Come on Eileen’ (1982) by Dexys Midnight Runners, which she dances along to, defending her choice. Her stubborn cheerfulness is a foil for the performative despondency of the characters around her: where Rob and Simon are disinterested and remote, she is immediately textured and poised. The record store dynamic is a little toxic in its codependency, a little therapeutic – like a lovingly dysfunctional family. Cherise’s enthusiasm for music, both others’ and her own, is passed off as deluded, contrasting with the aloof pleasure her colleagues derive from listening. They listen to music obsessively, methodically, but not as much to each other. Cherise’s care is what endures. The warmth of her presence redeems scenes in which her co-stars feel overwrought or preoccupied; she shows them how to slow down and stop trying to prove themselves. Despite her efforts, she is trivialized, but her dreams are clearly real and rooted in true talents that she’s refusing to expose until she is ready, for valid reasons. She doesn’t trust the music trivia crowd with her first stumbles into the spotlight of her own sound.

One shift, Cherise arrives late and Rob threatens to fire her. After Cherise claps back, Simon jokes to Rob: ‘You’ve created this monster, now we all have to deal with it.’ In the next scene, Cherise is seen sweeping, like some remix of Gordon Parks’s American Gothic (1942): another Black woman with a broom and a dream, the help, the mammy; a mirror for the monsters around her, one of the main forces humanizing them. It is over drinks that same evening that Cherise brings up her favourite underdogs and the concept of reinventing oneself to become oneself. I think of Charlie Mingus’s autobiography, Beneath the Underdog (1971), and of Black musical giants relegated to afterthoughts because they refuse to do the minstrel right. Cherise is on her way into their umbra, a self-proclaimed Aretha Franklin meets Ann Wilson.

By the end of the series, Robin has come to terms with her intimacy issues and her bad-friend issues. She trades her favourite David Bowie record for a Fender Vintera 1960s Mustang guitar, which Cherise has been saving up for by working a second job as a hotel coat-check girl. In true underdog glory, the show closes with Cherise’s cadences as she teaches herself chords and composes a song, singing herself and us its mending melody, for every bleeding heart in the cast and in the audience. I hope for a second season because I want to see her evolve from being dismissed by her colleagues to creating the kind of music that reminds us that Black people have private lives and hidden talents. We slang and dance these gifts into the shadows sometimes so that we can reinvent their cadences on our own terms. 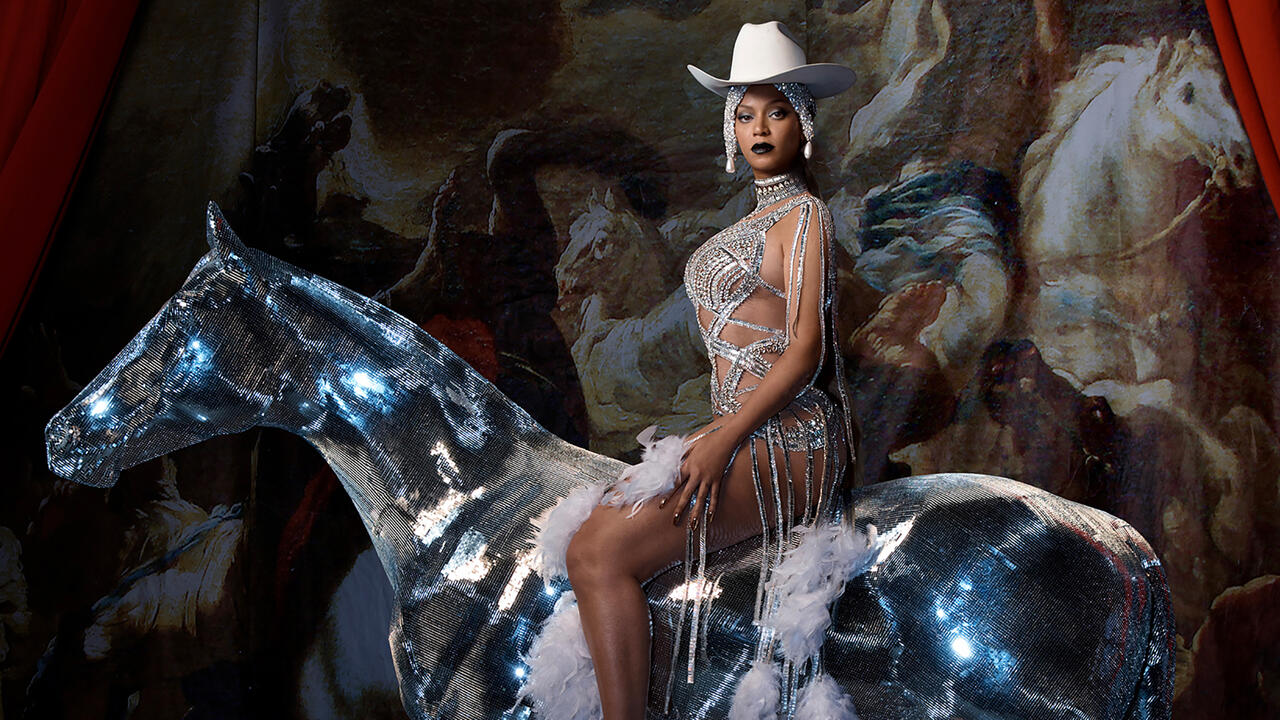 BY Evan Moffitt, Fred Moten AND Harmony Holiday | 17 DEC 20
MORE LIKE THIS