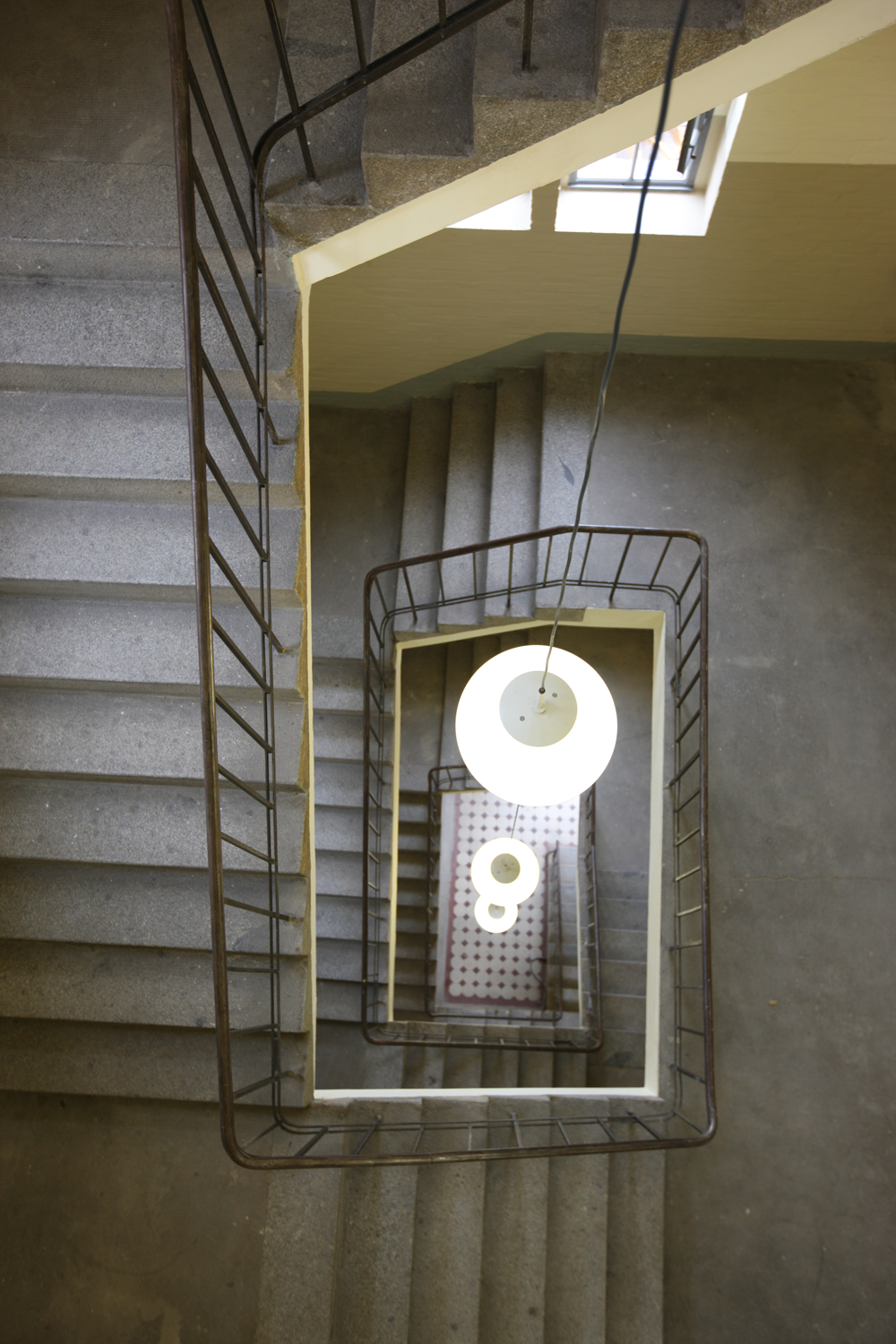 In April 2009, the Berlin-based Danish-Icelandic artist Olafur Eliasson will begin his professorship at Berlin’s Universität der Künste (UdK). This might not sound like ground-breaking news, but for an art school that has endured much recent criticism in the German press for botching its relationships with professors and being woefully behind the times when it comes to hiring local talent, it’s a significant move forward. Granted, it took almost three years to negotiate a compromise between the structure of the traditional German art academy and Eliasson’s vision for his teaching position.

Following the German art education model, Eliasson will take on 15 to 20 ‘spatially motivated people’ from the pool of UdK applicants for the five-year duration of their studies, in addition to a few exchange students and – he hopes – three PhD candidates. But rather than commuting to the University’s studios, Eliasson will teach them in a 550-square-metre space located literally on top of his own studio. In conjunction with his recent move to a new studio complex – a newly renovated, industrial brick building on top of a small hill in Berlin – Eliasson has integrated a specially designed second-floor space where his students, or ‘participants’ as he steadfastly refers to them, will attend seminars and have their studios.

The school (as yet unnamed) will be an ‘educational platform’ with a lecture room, shared studios, a media lab and a staff office, while the other floors will remain dedicated to Eliasson’s own work.1 While UdK may not be ready to fully accommodate this unconventional system, Eliasson’s practice is well suited to take on such a project. His studio is already a self-maintaining institution of sorts, with over 40 employees working in a collaborative, communal atmosphere of architects, designers and assistants who eat meals and perform experiments together, host a steady rotation of visitors, and organize seminars and discussions.

But this is no Utopian dream factory; it is a highly productive, efficient and not entirely un-hierarchical working structure. Inside his studio, the nuts and bolts of Eliasson’s working process remain exposed: a team of assistants fabricate pieces in the basement while others handle paperwork in the office, and it’s not unusual to find giant expandable spheres and fragments of geodesic domes lying amid architectural models, shipping crates and piles of toys belonging to Eliasson’s two young children. So why is it necessary for Eliasson’s ‘participants’ to work and learn in his building rather than in the designated spaces UdK provides? According to the artist: ‘There is a fundamental difference between being with an artist in a studio and being with a professor in an academy.’

Eliasson describes the tradition of sequestering students in an academy as ‘dogmatic, static and conservative’ and believes the learning environment doesn’t have to be a ‘cocoon’; he wants his school to be ‘closer to the street, closer to reality’. For Eliasson, who quit his own art education in 1993 to work as an artist’s assistant in Cologne and Berlin, being closer to reality has as much to do with observing an artist’s working practice as it does with engaging with the city outside the studio. ‘There’s so much information being circulated within Berlin,’ says Eliasson. ‘It would be a mistake for the school not to try to incorporate that into the core part of its education.’ He believes that the exchange of ideas in Berlin ‘happens almost by itself’ and that the close proximity of so many artists to each other, and the relative ease in getting around, makes it not only less formal but also less costly for guest teachers to visit.

Fundamentally, Eliasson doesn’t see his studio as a haven isolated from the workings of the city but as an elemental, integrated part of it. ‘Stepping into the studio is not stepping out of the city,’ says Eliasson. ‘It is, in many ways, stepping closer to the city.’ Rather than adopting the model of a Renaissance studio with its apprentices, Eliasson hopes his participants will benefit from the combination of idea production and physical production that goes on in his studio, believing that ‘the overlap between the school and my studio will not be how I make my work but why I make my work’. He hopes to achieve ‘an organic system where a social ideology within an artistic language will develop evolutionarily’. Though he’s less sure about how this will work practically: ‘I’m not saying it will succeed but I have faith in it.’

Despite such occasionally abstract talk, Eliasson consistently stresses the practical values of productivity, responsibility and precision. ‘I’m very conventional in the way I work and create objects in my studio – I always love to say that I am mainstream.’ His programme will have a formal educational structure, with a reading list ranging from Thomas More’s Utopia (1516) to Juhani Pallasmaa’s The Eyes of the Skin (2005), as well as a curriculum that he will formulate along with his staff, who all have academic backgrounds. While he’s not yet sure if he’ll conduct conventional ‘critiques’, Eliasson will be involved with the school about once a week, in addition to organizing a regular rotation of guest teachers who will host their own seminars or lecture series. ‘I was a terrible student myself,’ admits Eliasson. ‘Occasionally there were brilliant people who passed through the school, and I so much regret not realizing that.’

Most importantly, Eliasson wants to give his participants the tools to negotiate their practices within a wider context. ‘We won’t pretend that the commercial market doesn’t exist,’ insists the artist, ‘because that would be misleading.’ Since he regularly works on large private commissions, corporate projects and public works, his students can take advantage of observing the studio’s ‘day to day friction with outside elements’ such as clients, curators or publishers – an exchange the artist sees as necessary and ‘ethical’. ‘I am constantly navigating institutional architecture,’ he explains, ‘not just as a person but as a studio.’ Eliasson believes that no artistic idea is impervious to these structures and influences. To show students how to negotiate them, he would propose to let them follow the entire production process of a sample project, such as a public commission.

Though Eliasson admires artists who never went to art school, he nevertheless thinks that art education is increasingly important. ‘The world is just so fucked up that it seems desperately to need art around. I think the participants will take away from the school the potential of being productive participants in the world. And I think this requires a sense of responsibility and precision. I hope they’ll learn to be a part of the world or “with the world”. Whether they then claim to be artists is completely beside the point.’

Though his aims may sound idealistic, Eliasson has proven with his own practice that it is possible to build an infrastructure to carry out exactly these kinds of imaginative, ambitious visions. As for what he’ll get out of it, he already takes great pride in his team of collaborators (‘the kind of people who can cut a piece of wood more generously than I can’) and he’ll be happy to welcome more. ‘The inspiring thing about the school,’ says Eliasson, ‘is that I am going to meet a lot of people who can do things that I can’t.’

1 All quotes from a conversation with the artist on 15 August 2008. More details about the school will be released at the official press conference to be held by UdK in October.

Edwin A. Abbott, Flatland (1884) Daniel Birnbaum, The Hospitality of Presence: Problems of Otherness in Husserl's Phenomenology (1998) Michel de Certeau, The Practice of Everyday Life (1980) Jonathan Crary, Techniques of the Observer: On Vision and Modernity in the Nineteenth Century (1992) Guy Debord, Society of the Spectacle (1967) Gilles Deleuze, Bergsonism (1990) Jan Gehl, Life Between Buildings: Using Public Space (1987) George Kubler, The Shape of Time: Remarks on the History of Things (1962) Bruno Latour, 'From Realpolitik to Dingpolitik - An Introduction to Making Things Public', in Making Things Public: Atmospheres of Democracy (2005) Doreen Massey, For Space (2005) M. Minnaert, The Nature of Light and Colour in the Open Air (1954) Chantal Mouffe, 'Agonistic Public Spaces, Democratic Politics, and the Dynamic of Passions', in Thinking Worlds: The Moscow Conference on Philosophy, Politics, and Art (2008) Thomas More, Utopia (1516) Juhani Pallasmaa, The Eyes of the Skin: Architecture and the Senses (2005) John Rajchman, Constructions (Writing Architecture) (1998) Steen Eiler Rasmussen, Experiencing Architecture (1964) Israel Rosenfield, The Invention of Memory: A New View of the Brain (1988) Felicity D. Scott, Architecture or Techno-Utopia: Politics after Modernism (2007) Francisco J. Varela, Ethical Know-How: Action, Wisdom, and Cognition (1999) Lawrence Weschler, Seeing is Forgetting the Name of the Thing One Sees: A Life of Contemporary Artist Robert Irwin (1982)