As a novelist, I’m susceptible to the habit (syndrome? pathology? let’s call it, more neutrally, tendency) of turning to literary templates in order to understand the various scenes and contexts into which chance drops me. This summer solstice, it had sent me on a car ride through the verdant countryside around Berlin to the farmhouse that, for the past few years, has served as studio-headquarters to artist Danh Võ, famous for his reconfigurations of eclectic, culturally loaded objects that set fridges, flags and flagellated Christs in dialogue with one another. So, unsurprisingly, as I idled around Guldenhof’s luscious and expansive lawns, nurseries and pastures, I found myself thinking of the great park in Raymond Roussel’s Locus Solus (1914). Amidst that novel’s bowers and arbours, madcap inventor Martial Canterel dazzles visitors by having various tableaux vivants play out: the guillotined head of French revolutionary Georges Danton re-speaks some of his old lines; resurrectine-infused corpses act out episodes of their past lives. Here, too, on this gloriously sunny day, a mode of replay seemed to hold sway; although I’d never visited before, the scene appeared recognizable. In tall grass beneath drooping apple trees and willows, two glamorous young women languidly played chess; nearby, a Japanese coiffeur tended to anyone who wanted their hair snipped; insouciant characters – collaborators, friends, collectors – drifted between willow chairs and benches chatting in French, Danish, English, German; a photographer snapped away. It was like a cross between a field trip from Andy Warhol’s Factory and a Vogue shoot, running on a carefree loop. 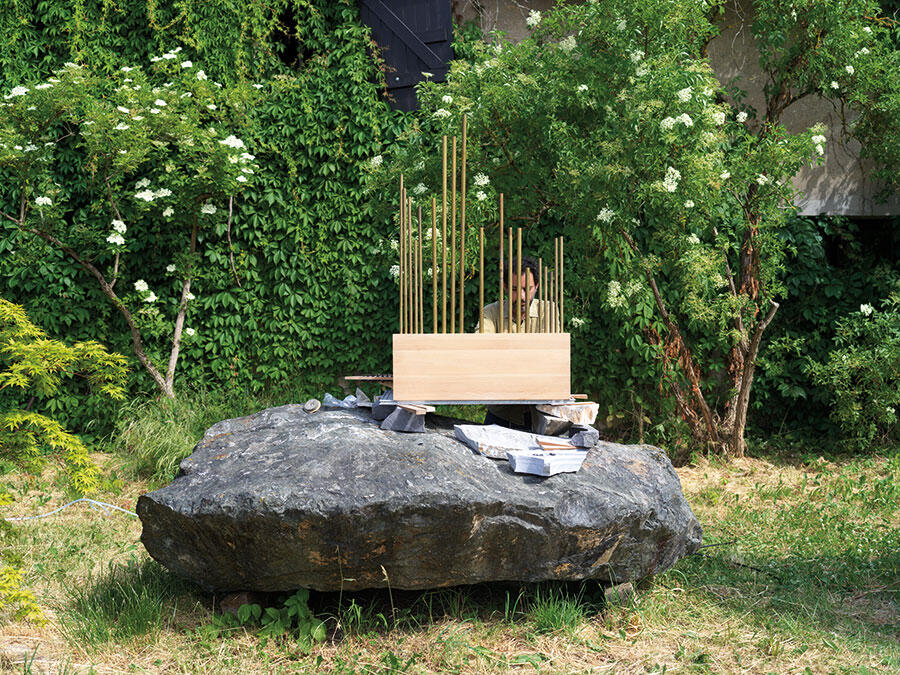 From behind colossal sunglasses, Chantal Crousel, Võ’s dealer, iPhone-tracked the crates of champagne she’d had sent. The sound artist Tarek Atoui, resident guest-of-honour, darted about indefatigably, tweaking elaborate instruments he’d constructed speculatively from drawings of extinct ones and installed – along with human operators, amplifiers, mixers and so on – amidst the plants, sculptures and buildings, generating frequencies and dominants and tonics from which dance students from Salzburg took their cue, pirouetting and gyrating on the upper floors of barns, on paths, among giant piled-up slabs of marble. No less elaborate than the instruments’ pipes and tubes was the system of sprinklers running about the property to irrigate the planting rows and flower beds.

‘This is an East-German device,’ Võ explained as we passed one whose spray was generating a remarkably clear rainbow, which a succession of entranced guests were Instagramming. ‘It pumps at a perfectly consistent pressure. No one’s bettered it.’

Less consistent but more welcome on this hot day was the overhead mist-dispenser we passed beneath next, transforming a lettuce- and herb-patch courtyard into a haze-covered magic kingdom.

‘Gardens’, Võ mused, stroking first one flower then another as he led me on towards the beehives, ‘are like art. We make decisions all the time: what to include, what’s beautiful and what’s unwanted – don’t you think?’ 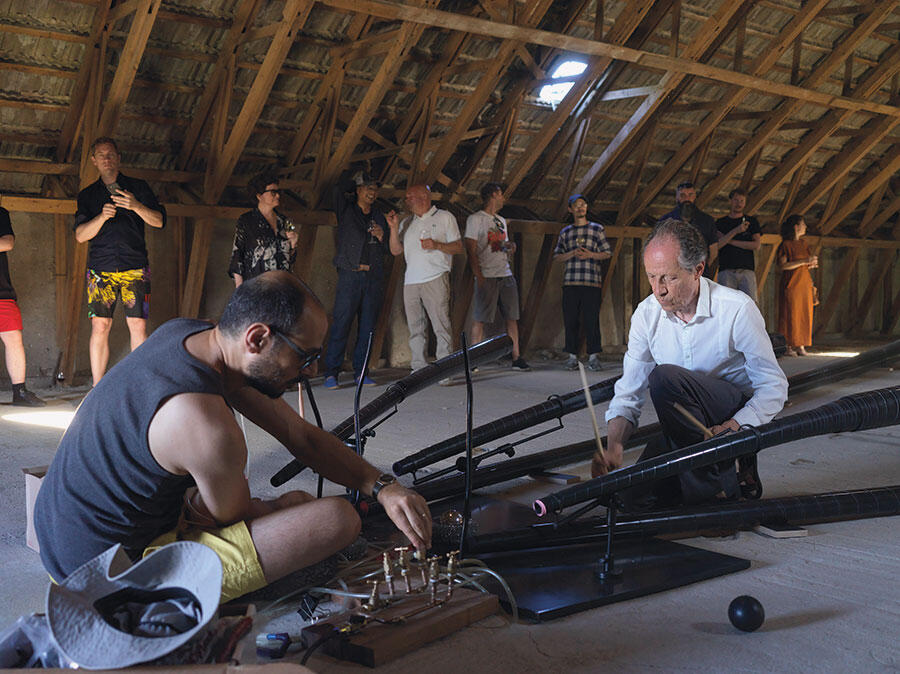 I didn’t answer, since my thought-space was being hazily, yet persistently, co-opted by another, decidedly less highbrow literary template. In his James Bond novels, Ian Fleming has arch-villain Ernst Blofeld set up, high in the Swiss Alps, an allergy-research centre doubling as a cover for a fiendish bio-terrorism plot (for some reason, its residents are concupiscent British farmgirls); then, when 007 has rumbled this, a remote garden in Japan, amidst whose rare poisonous plants he stages his Lautréamontian power-fantasies. Bond’s relation to Blofeld, as to several other of his villains, follows a trajectory (as anyone who’s seen the film versions will know) from meticulously greeted guest to iron-clapped prisoner to avenging saboteur. Listening heat-dazed to Võ’s reflections, I found myself wondering if his sub-Aristotelian monologue was leading up to words along the lines of: ‘And now, Mr. Bond, you, too, have become unwanted; like an unlovely weed, you must be excised from my garden …’

By this point, we’d looped back round to the mistified salad-row courtyard, about which helpers, who I was now convinced were SMERSH or SPECTRE agents, were gathering leaves. I recognized the erstwhile chess players among them, bearing their precious samples down into a concrete bunker-type building, from which they emerged a few minutes later carrying guns, or maybe a stolen missile-control console disguised as a sound-art theremin, or, in fact and more prosaically, summer rolls, inlaid with Guldenhof’s own rucola and sorrel. Städelschule students handed them around; they were delicious.

‘I don’t want’, Võ  told me after we’d eaten in silence for a while, ‘to just perpetuate the gallery-collector money system. Screw that. This place is a platform for something else: encounter, speculation …’

Later, I sat on a bench with Susan Philipsz, whose own wonderful sound-art installation I’d visited two days earlier at Konrad Fischer’s former power-substation gallery. We talked about our various past projects on early radio; the next day, by post, we’d exchange novel and exhibition catalogue. I talked with Susan’s partner, Eoghan McTigue, about our shared fascination with the relationship between James Joyce and his daughter, Lucia; he put me onto a reference I’d look up when I got home. Conversations of this nature seemed to be flowering all around us. This was, indeed, encounter; this was speculative platform, springboard. 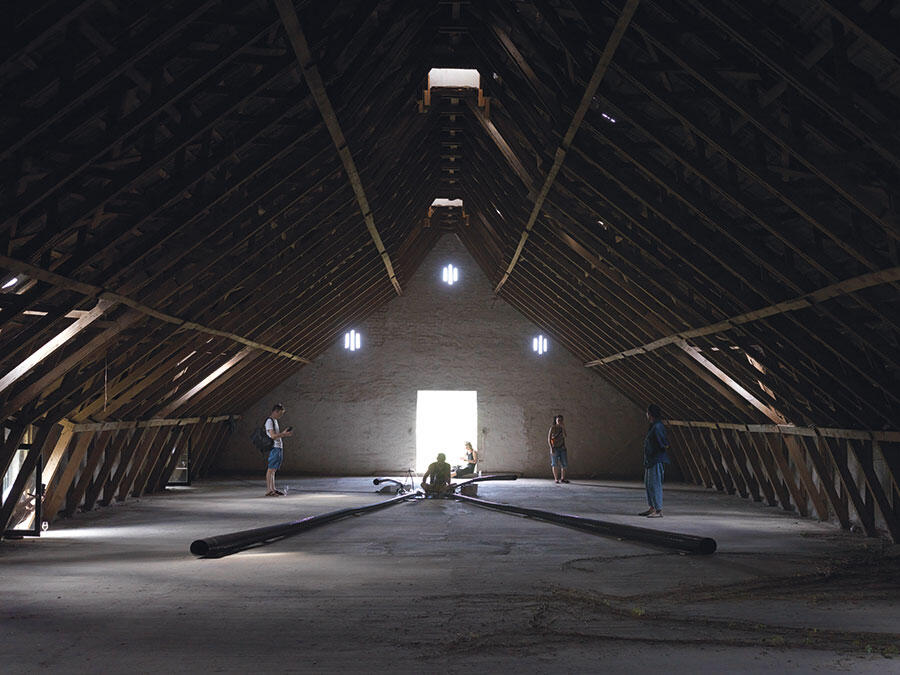 Why, then, as I lay in bed back in Berlin that night, could I not drive another literary template from my mind? This one came from Marco Polo: his description of another garden retreat, that of Hassan-i Sabbah, legendary ‘Old Man of the Mountain’. In 12th-century Syria, Sabbah rigged up an elaborate stage set in which wine and honey flowed from fountains, divine voices spilled from plants, and maidens tended to hashish-dosed young men who, led to believe they were being granted a glimpse of paradise, placed themselves henceforth in the service of the Old Man, who’d hire them out as hashishin or ‘assassins’ – contract killers to the courts of distant Europe. What’s always intrigued me most about this set-up is that the fountain-pump operators and the divine-voice pipers must themselves have once been naive adepts who believed it was all real; yet still, rather than blowing the whole gaff when they discovered that it was fake, continued to expend great efforts to help maintain the illusion – maybe because they, too, at some level, still believed in something, in some value to whatever scene they saw playing out around them …

All of which leads me, in a roundabout manner, to report that the way I see it now, from the sobriety of my desk, is this: the flowers, the herbs, the rocket-leaves and drooping fruit at Guldenhof aren’t fake as such; rather, they’re camouflage. A decoy. Our attention should be on the irrigation system that supports them – on the armature, if you like, of mistification. Võ is asking the right question – and, indeed, should be congratulated, celebrated even, for staging this question so baroquely. It’s the right question, but not, I feel, the right answer. How can it be, when the same pump is powering both market and garden, down a direct-feed champagne pipeline running from one locus to the other?

Võ was kind and generous; there’s something undeniably seductive about the whole Guldenhof set-up; besides which, there is an ethics of hospitality of which I’m cognisant. But there’s also an ethics of deliberation, to which, if we actually believe that there’s some kind of – elusive, hard to pin down, but nonetheless still there – value to this whole art and culture thing, we should show a fidelity. 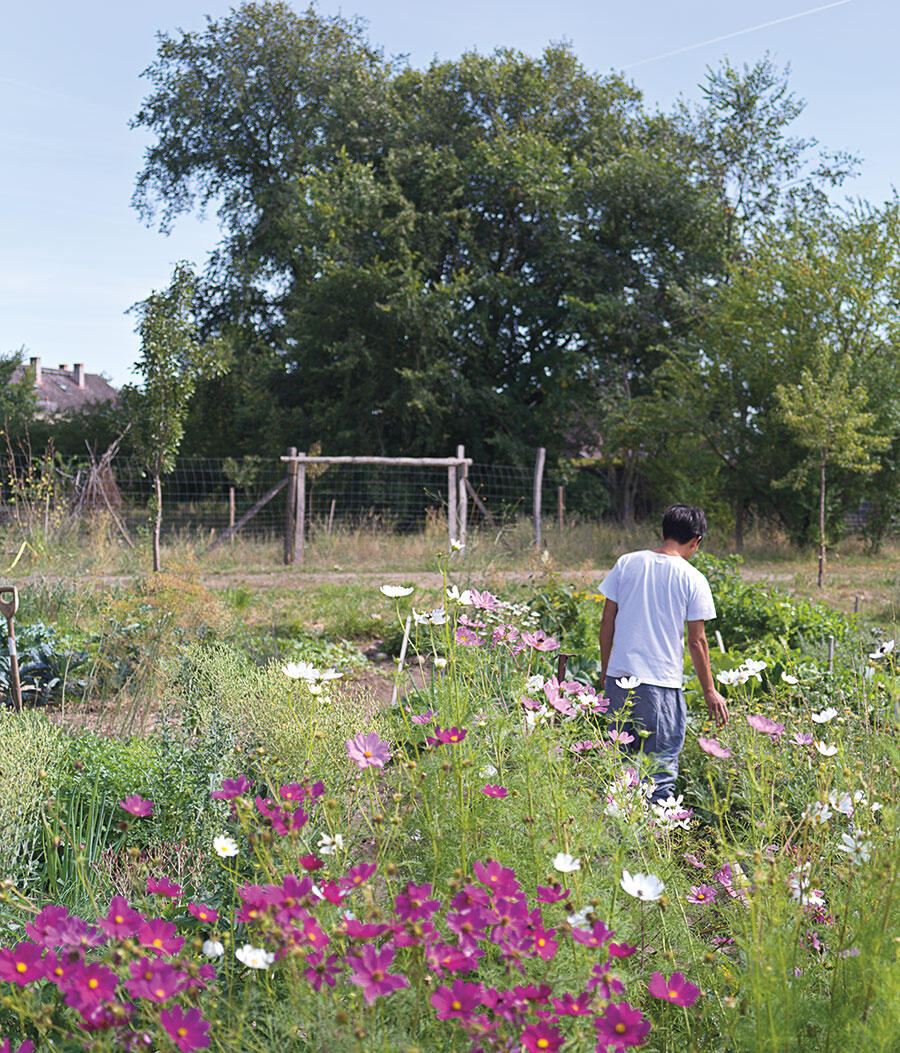 Allow me one final literary digression. Towards the end of Joyce’s Ulysses (1922), the floridly named Leopold Bloom draws from his kitchen tap a glass of water – which act sparks a long reflection on not only that liquid’s dynamism and aesthetics as it erupts in waterspouts and cloudbursts, its mystery as it bubbles from springs and so on, but also an accounting of each mile that it has travelled from reservoir to tap – who owns or leases out which stretch of piping, for how much per yard and under whose jurisdiction. The two views are not incompatible; on the contrary, they complete, or require, one another. So it is here: the rainbow in the spray is not an illusion – it’s composed of actual photons, the extraction of light’s spectrum into strands each operating on its separate-but-related frequency, like the notes of Atoui’s music. But understanding, or appreciating, it requires interrogation of the entire structure by which the separating-and-relating mechanism operates, the frameworks of its possibility, the networks of its substrates. We need to make a map – as it were, a Mark Lombardi diagram, minus the paranoia. There may not be a conspiracy, but there is an infrastructure. Only when we diligently parse this infrastructure in its joined-up, looped entirety might we begin to understand what culture is or could be, what role it plays, and our place, or places, in the sun.

This article first appeared in frieze issue 221 with the headline ‘The Rainbow & the Pump'. 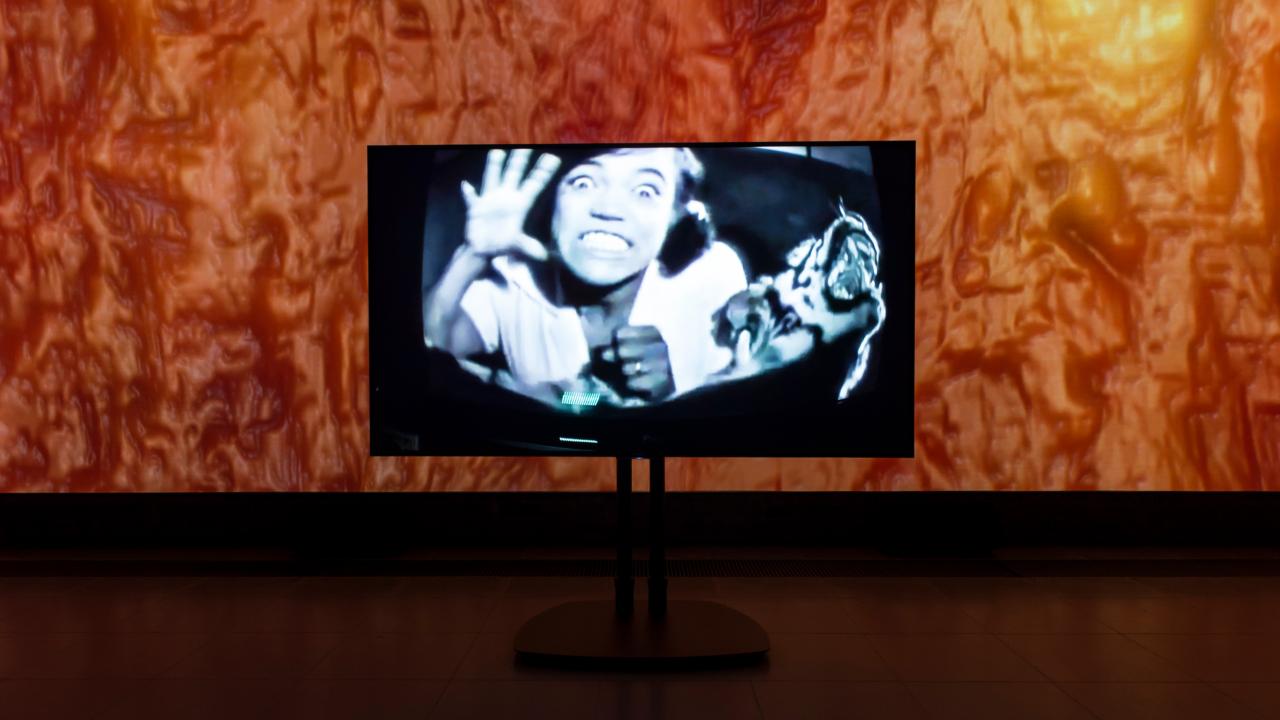